City records 71 dog bites so far this year, 3 of them fatal 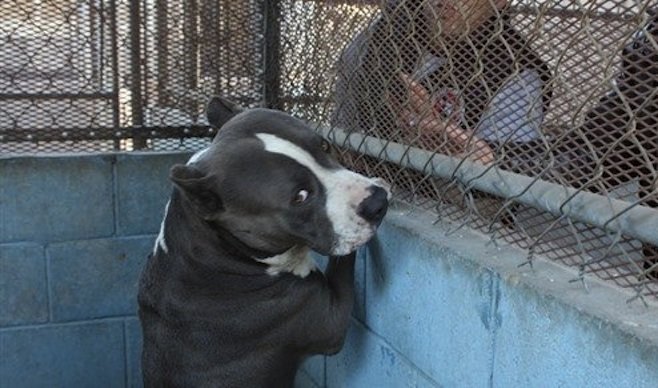 A 37-day-old baby girl died on Wednesday, December 11, shortly after she was bitten on the head by a pit bull at her grandmother's house in Tijuana, according to newspaper accounts.

The infant, identified only as "Alisson," was bleeding from the right side of her head when paramedics arrived at her grandmother's home in the La Presa area of Tijuana shortly before noon, the daily newspaper El Mexicano reported. She was rushed to a nearby medical clinic, where she died shortly after her arrival.

Authorities told El Sol de Tijuana that the child's 20-year-old mother, Lucero Celeste Lara López, gave the following account of the tragedy: She arrived at her mother-in-law's home at about 11:45 a.m. so the newborn could visit her paternal grandma, Miriam Leonor Estrada Armendáriz, 41. The older woman let the pit bull loose so it could go outside to the patio, but, instead of heading to the patio, the dog lunged at and bit the child, who was in her mother's arms when the attack occurred.

Tijuana police summoned to the scene contacted animal control officers, who seized the dog, El Sol reported. The two-year-old, 66-pound pit bull will be euthanized this weekend by lethal injection, the newspaper reported in its December 13 edition.

According to El Sol, Wednesday's deadly attack was the 71st reported dog bite in Tijuana so far this year; three of them were fatal.

El Mexicano reported in its December 13 edition that the dog had earlier tried to bite two other children and once attacked its owner.

The baby's grandmother, who owns two other pit bulls, was taken into custody for questioning by investigators, El Mexicano reported. Prosecutors will later determine whether any criminal charges will be filed. If found criminally liable, the grandmother could be sentenced to anywhere from five days to three years in jail.

The child's mother, according to El Mexicano, told investigators that her baby's death was an accident, that she forgave her mother-in-law and preferred that no charges be filed against her. She also said she did not want any monetary damages.

I am so sorry for the loss of this infant. The family members are in my thoughts and prayers. Alison is now with the angels.

Having an attack dog kill a tiny infant is absolutely sickening. Remember how small and utterly vulnerable such a child is, and how it depends upon adults for care and survival. But also recall that this occurred in Mexico, and our 'Merican attitudes and values really don't apply there. Life for many Mexicans is cheap, cheap, cheap. Do the mother and abuelita really care about this? Heck, in a few months there can be another kid to replace that one. And as far as legal remedies south-of-the-border, don't expect anything like we have. (Not that California is making any real attempt to get tough on attack breeds.) No, if grama is well-connected in TJ, this is the last you'll hear of it.

One final comment--they actually have such a thing as "animal control officers" in Baja? Sounds positively first world!