There be (lots of) dragons

A consideration of sources. 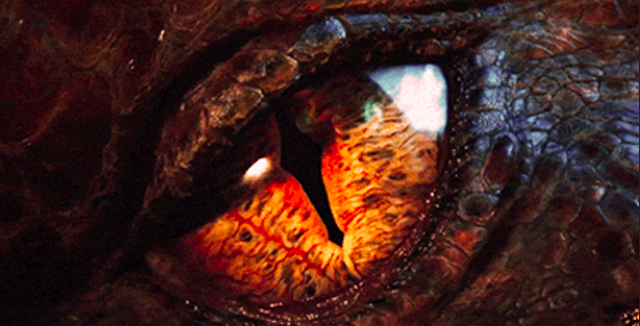 The hobbit in The Hobbit may get the title, but it's pretty clear by now that the real star of Peter Jackson's Hobbit trilogy is the dragon Smaug. 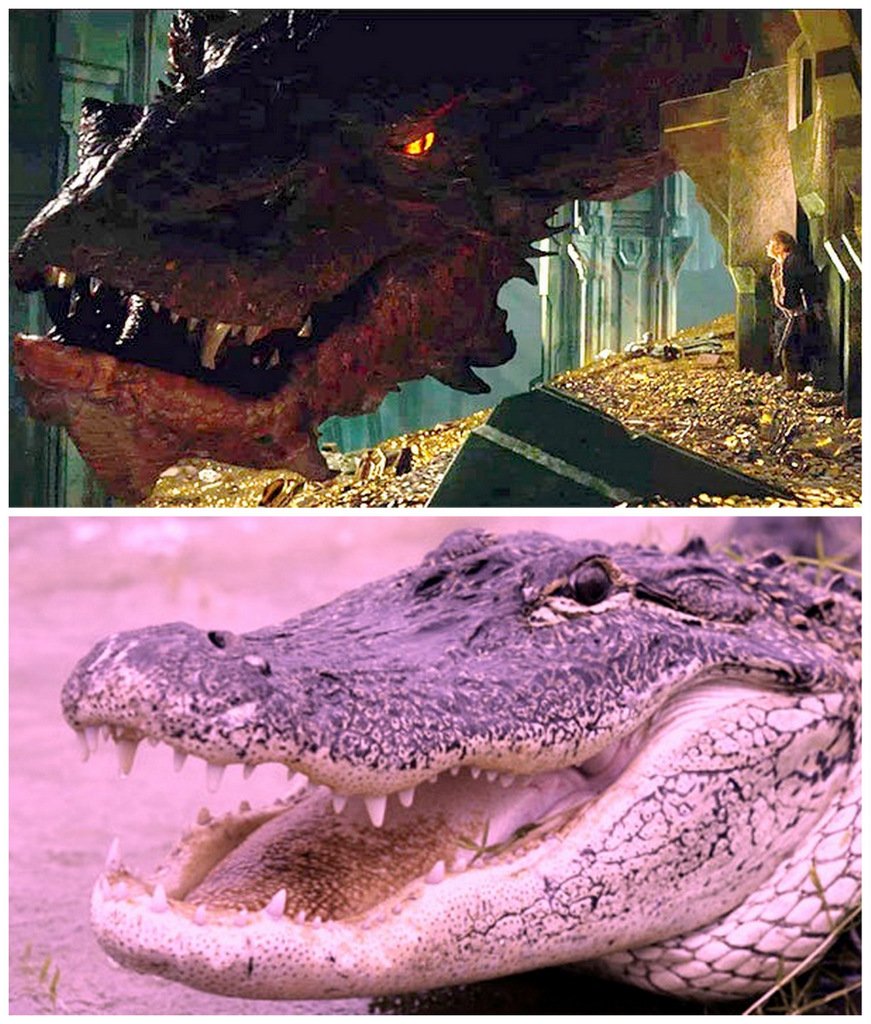 This isn't exactly surprising; Jackson's roots are in the monstrous world. After the fantastically grostesque career-starting trilogy of Bad Taste, Meet the Feebles, and Dead Alive, he moved on to prettier (but no less monstrous) subjects in Heavenly Creatures. It wasn't until The Frighteners that he tried his hand at a heroic protagonist, and The Frighteners wasn't a very good movie. (And even there, the hero was a medium for putting the viewer in touch with the ghostly menagerie.) 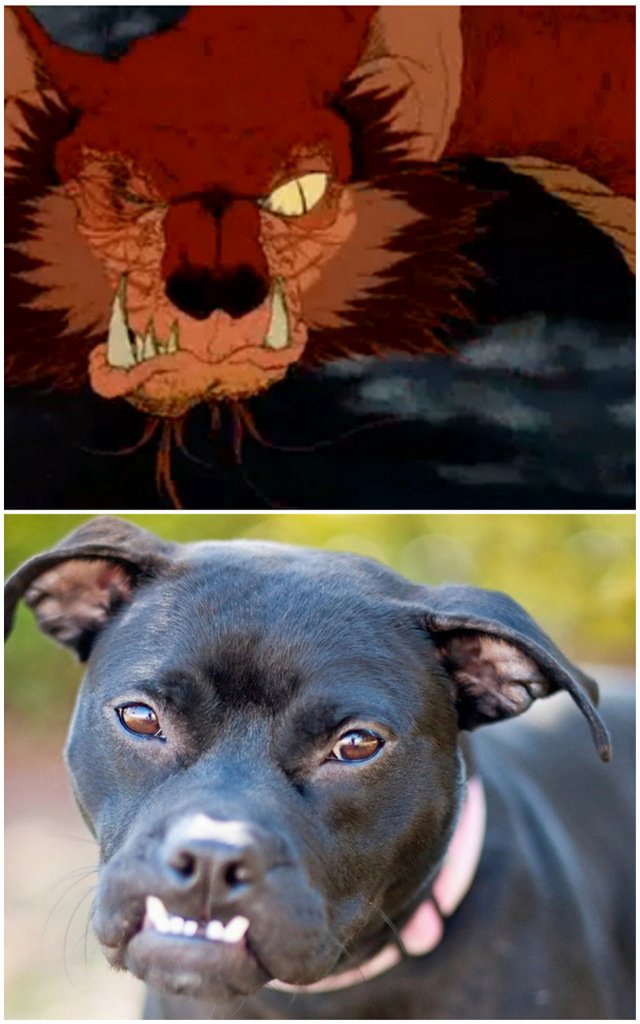 Part one, An Unexpected Journey, ended with the opening of Smaug's great reptilian eye as he woke from his gold-blanketed nap in the heart of Erebor. Jackson's message was clear: This is where we're headed, people. Get excited. 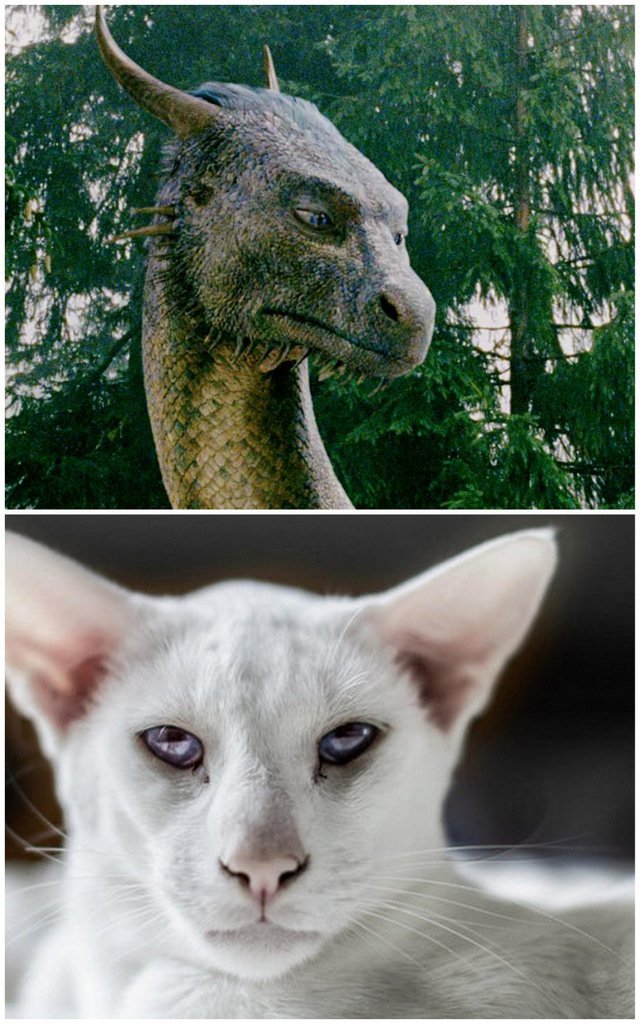 We could have ended with the scene where Bilbo puts aside his fear and faces death in order to save his companions. It's a properly transformative moment, a suitable capstone to the story so far. But Bilbo's transformation isn't the point. Bilbo is a stand-in for the schlubby viewer, a mule whose purpose is to carry you from one thrilling action sequence to the next, culminating in the dragon. I'm not going to give away the ending to Part Two, but I will say that it makes it clear that Smaug occupies the central position in Jackson's trilogy. 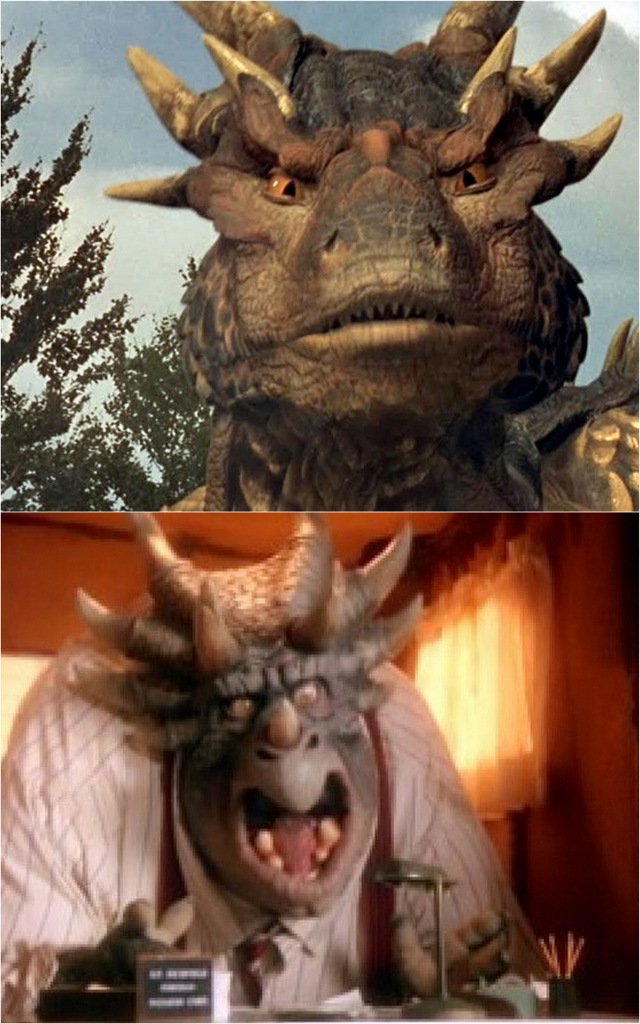 So: Smaug. He looks good. It seems clear that the designers chose to model his head after that of an alligator. That's probably the right call; as voiced by Benedict Cumberbatch, Smaug is the sort of dragon who delights in his own wickedness, and no other lizard sports such a wicked grin. 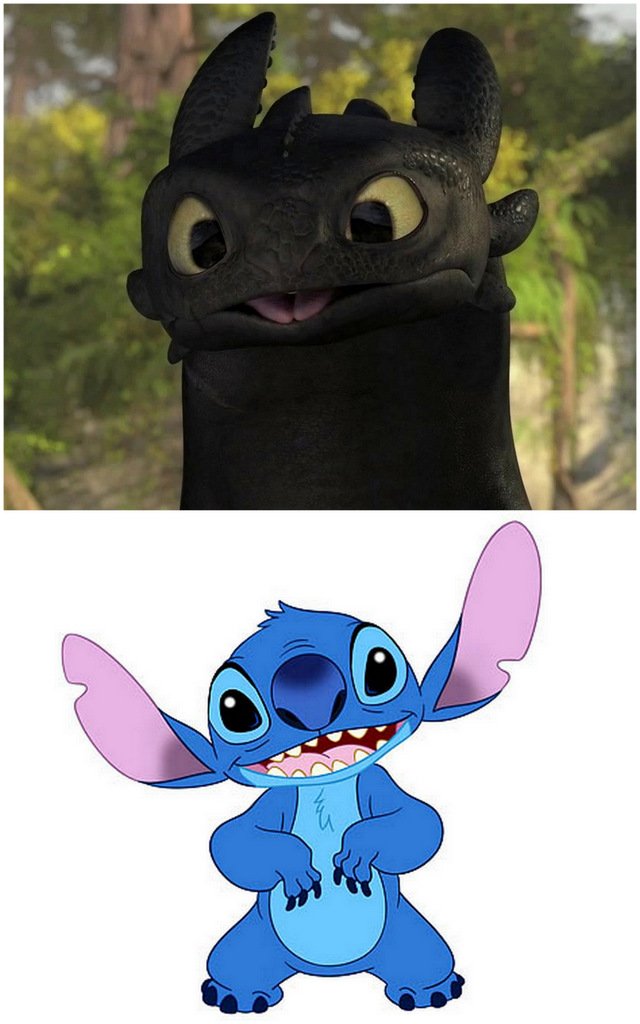 How to Train Your Dragon's Toothless

Alas, the choice makes sense on other levels as well. Jackson isn't about to settle for Smaug's somewhat limited role in the book: this is his central beastie, and by gum, he is going to put him to work. We are going to see him in action. Even if it means that every now and then, we have to make him behave in bizarrely unintelligent ways. I won't go into detail; I wouldn't want to spoil the fun. But more than once, Smaug goes from wickedly insightful serpent to dumb, lumbering reptile. Kind of like the gators in Disney's The Rescuers. 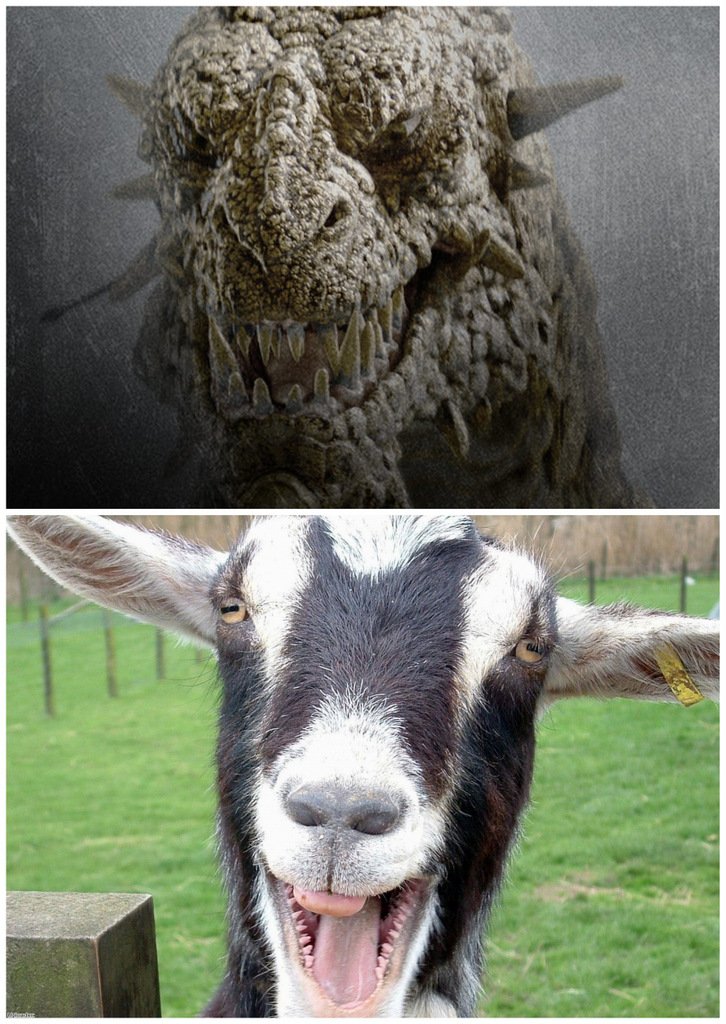 The depiction got me thinking about other cinematic dragons, starting with Smaug as he appeared in the 1977 Rankin-Bass cartoon version of The Hobbit. I'll never understand the decision to outfit him with furry cheeks and a back pelt. But I did like the cunning and pride in his expression; it showed the combination of intelligence and arrogance that would render such a creature willing to trade riddles with an intruder, to the point where he accidentally exposes his weak spot. Maybe the fur was there to indicate the source material: some kind of smart, aggressive dog, perhaps? 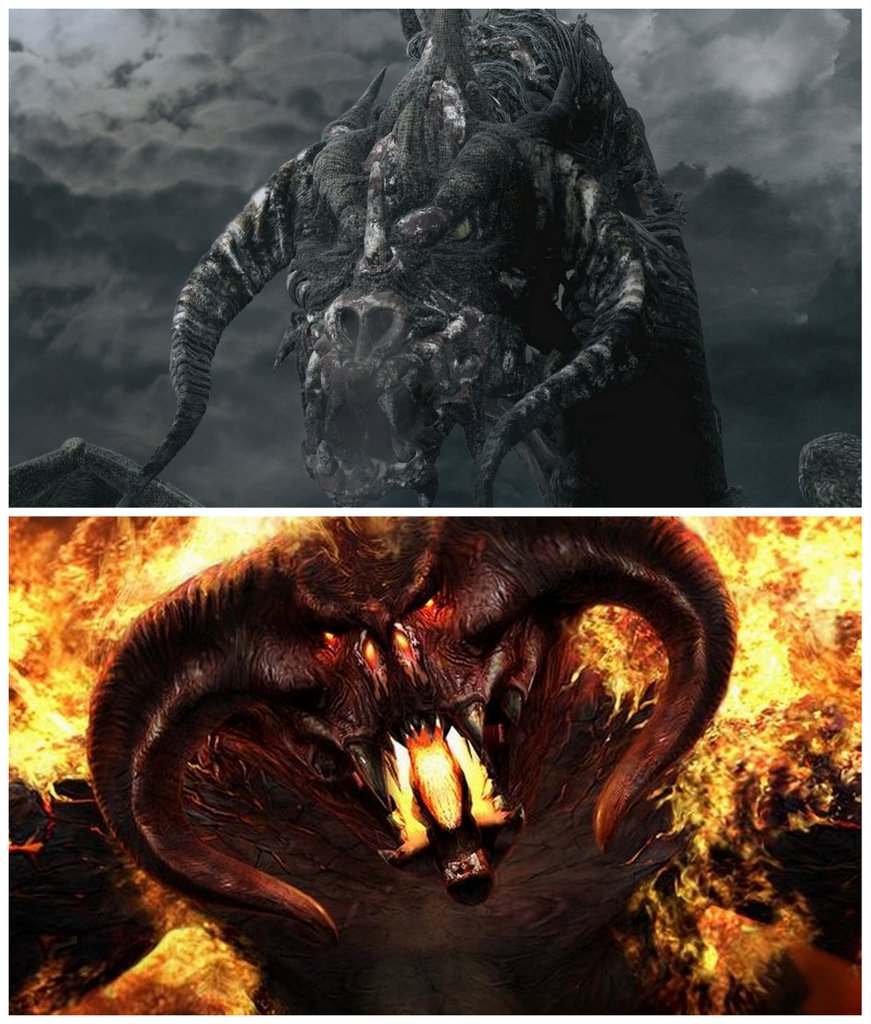 Of course, there are those who argue that cats are smarter than dogs, hence their refusal to bow and scrape for their masters' approval. Cats have dignity, aloofness. You may own them, but they're not about to make fools of themselves over you. All of which may explain the dragon Saphira's expression in Eragon. She's bound to her rider, but he's a bit of a goof.

Keeping with the theme of smart dragons who want to work with humanity, I guess you could do worse than to take inspiration from a lizard who was also a buttoned-down businessman? You all remember Dinosaurs! right? Dragonheart didn't change a whole lot here. 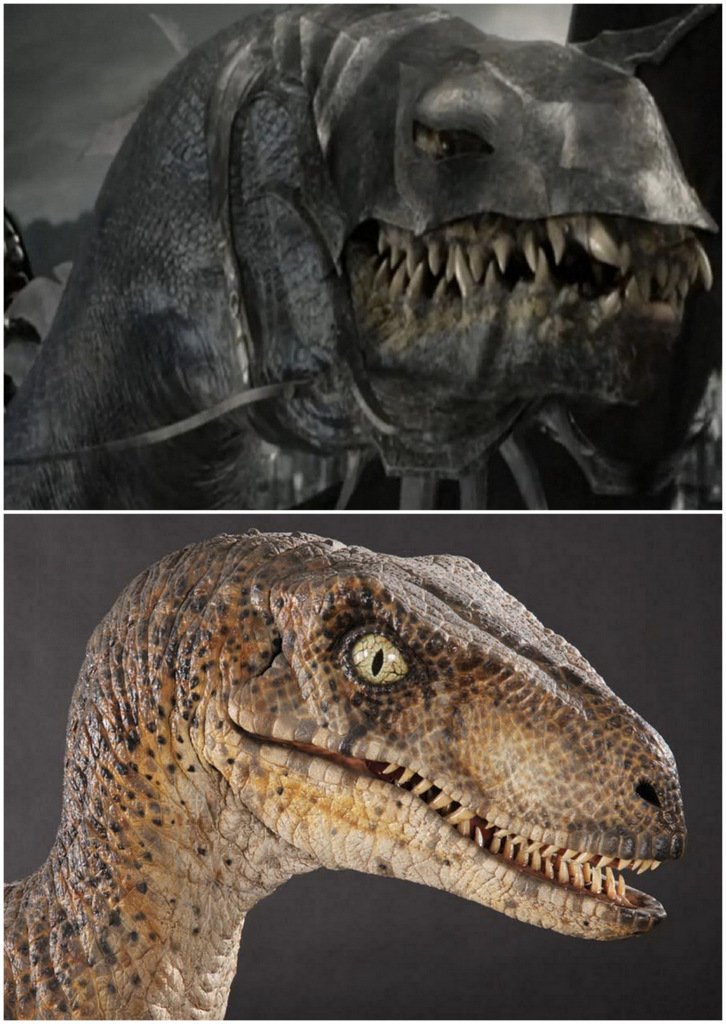 And speaking of not changing a whole lot, did anyone else think "Stitch with wings" when they first encountered Toothless in How to Train Your Dragon? I was surprised there wasn't a lawsuit, especially since Dragon grossed almost twice as much as Lilo and Stitch.

You don't always want intelligence from your dragon, however. Sometimes, you just want a brutish malevolence. The kind you might find in a goat face, satanic or otherwise. Hello, Beowulf. 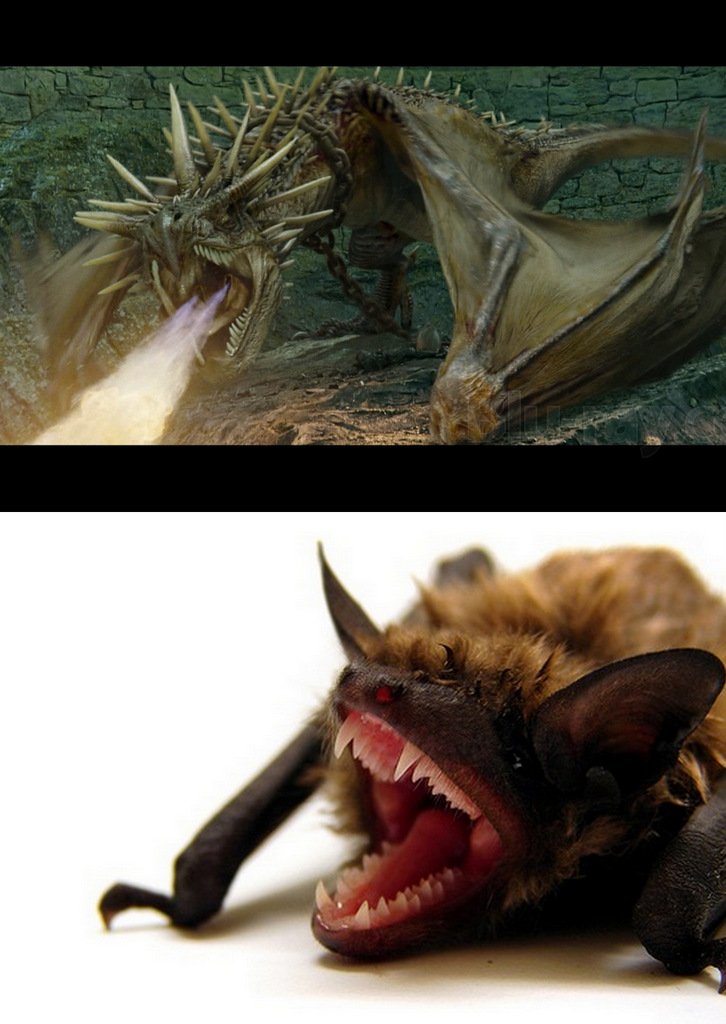 Other times, you don't have much in the way of a budget, and you just saw The Lord of the Rings: The Fellowship of the Ring, and you really liked the Balrog. I'm guessing that's what happened with Dungeons & Dragons: Wrath of the Dragon God.

Speaking of The Lord of the Rings, and borrowing from the best, does anyone else see traces of Jurassic Park's velociraptors under the armor sported by those critters ridden by the Nazgul? 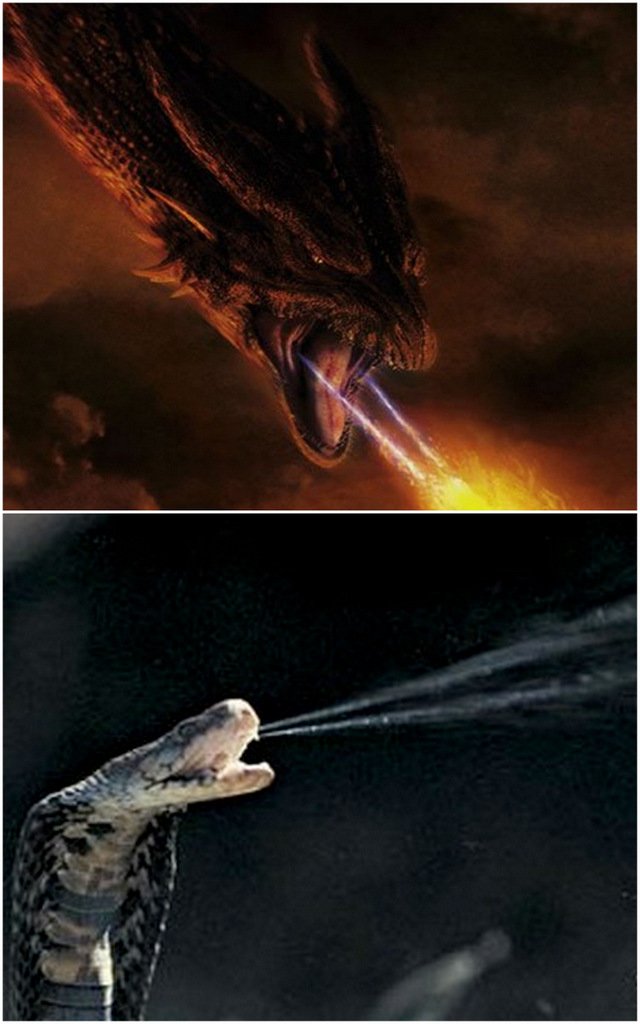 Then there are the dragons that are really just animals. Animals that kill lots and lots of people, but still just animals. You just need to tweak 'em a bit, add a few horns, and ta-da. See also: Harry Potter and the Goblet of Fire, Reign of Fire. 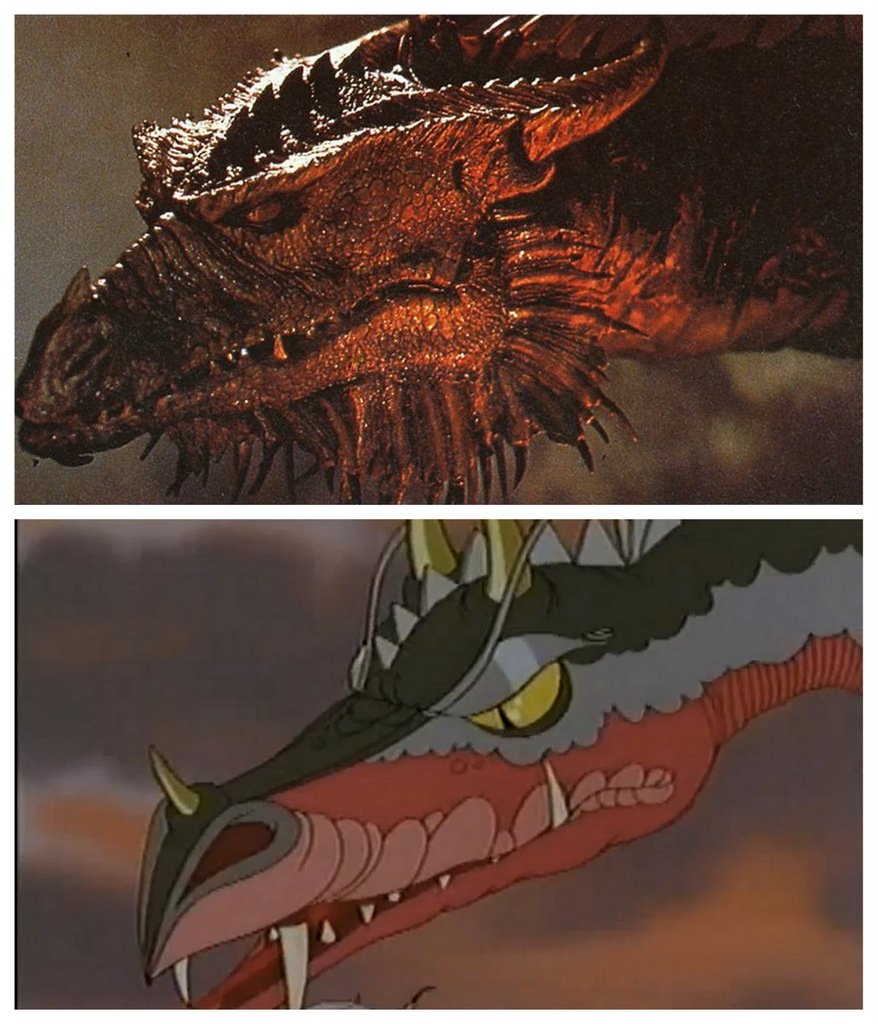 But my favorite dragons don't look like they're based on anything. They look like dragons. I'm thinking here of Dragonslayer's Vermithrax Pejorative and The Flight of Dragons' Bryagh. Dragons, plain and simple. Smart and vicious. Ill-tempered. And in need of a good stabbing by some brave knight. I'm simple that way.