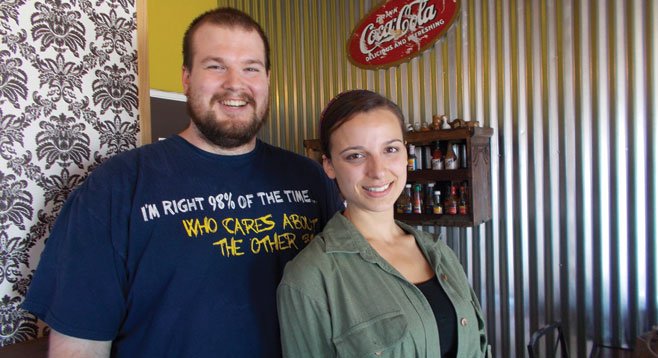 We’ve gone about as far as we can go. Just like in the song “Oklahoma,” right?

Least, that’s what I thought till I puffed my way up Market Street to Grant Hill and the crossroads at 25th.

Huh. The Mexican eatery at 25th and Market has changed again.

The new place’s hand-painted sign says “Sherman’s Shack,” and they’ve not only ripped out the security grilles, they’ve gotten rid of windows altogether. So, people are sitting inside but looking directly down onto the street. Makes you want to get in there and soak up the setting sun.

High on the outside walls they have chalkboards with scrawled lists of daily specials. The first one reads “Surf & Turf Burger: garlic shrimp and cream cheese–stuffed burger topped with orange sweet & sour.” Next to it, on the same board: “Coconut crusted fish on a GC salad with cranberries, goat cheese, and raspberry vinaigrette.” I’m figuring “GC” stands for “goat cheese.” 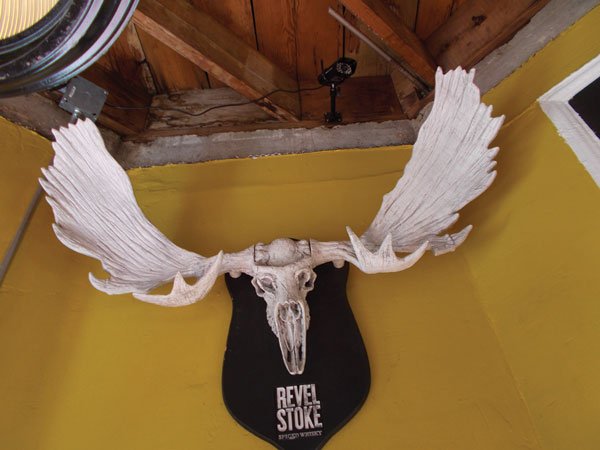 But it’s that garlic-shrimp burger that interests me — a shrimp and cream cheese–stuffed hamburger? Whoever heard? Guess this ain’t no standard greasy spoon.

I head through the bricky corner doorway and into an industrial-flavored space. Shiny vertical corrugated iron panels on one wall. Another wall’s painted yellow. Actually, yellow’s everywhere, from the seat cushions to the yellow-and-black counter. Plus, classy polished-plank tables. They have bits of art, like a painting of an eagle, a set of mounted moose antlers, a large black cross — which looks more like art than a religious statement, not that I ask — and a whole shelf of every hot sauce you’ve ever seen, all open for use. Plus dozens of animal salt-and-pepper sets on top.

“You can use them or buy them, $10 per set,” says Elizabeth, the gal on the high chair at the counter, pointing to the salt-and-pepper shakers. Guess part of their attraction is they’ve been used. She hands me a menu. 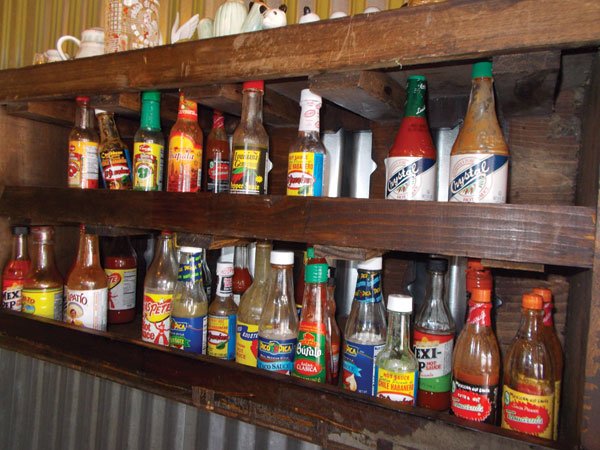 The spice rack has everything

My eye goes straight to the “handmade stuffed burgers with fries.” There are six of them, with names like El Diablo, Mid West, and Black and Bleu.

Elizabeth says stuffed burgers are the big thing here. El Diablo ($10) is the most popular. It’s stuffed with jalapeño, spiced Monterey jack cheese, and bacon. The Shack Burger ($11) has bacon, caramelized onion, Monterey jack, jalapeño and mushrooms in its belly, plus an egg on top. The Black and Bleu (blackened spiced burger patty stuffed with blue cheese, caramelized onions, and mushrooms) is also $10.

Now Jason is here, too. He runs the front of the house.

“The funny thing is that mostly it’s Anglos asking for the tacos and Mexican customers who ask for the burgers,” he says. “But even though the stuffed burgers were the basic idea, we knew that in this area you need tacos.”

The tacos sound pretty interesting, even the standard ones. The Carne Asada ($2.50) has “sliced tender steak, pineapple salsa, and queso fresco.” The Drunk Chicken ($2.25) has “chicken, slow roasted in whiskey and orange juice, topped with lettuce and pico de gallo.” The shrimp taco ($2.50) is “golden crispy shrimp, sesame-seed slaw, sweet and spicy chili sauce.” The cheapest is the “veggie,” with peppers, onions, avo, lettuce, and queso fresco ($1.75).

They also have a couple of vegan tacos, which tells you one thing about Grant Hill: gentrification’s getting traction up here. Orange “chicken” is tofu on a bed of rice and peppers), and there’s a Baja “fish,” in beer batter. They’re $2 each.

The burgers might be more dinero than you’d like (you get four tacos for the price of one burger), but I can’t resist the idea of a stuffed patty. ’Specially the Surf and Turf. 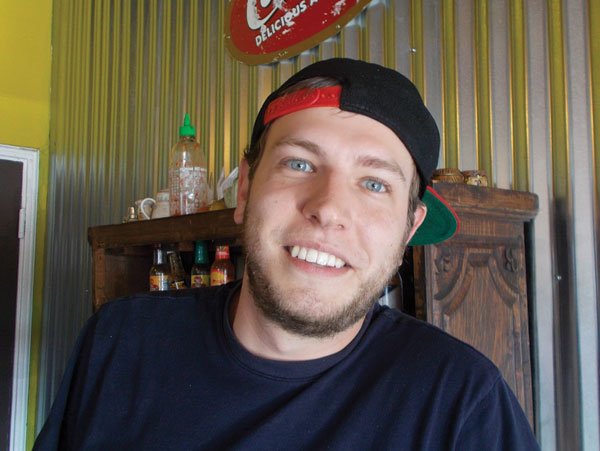 So I order that and then the Black and Bleu for Carla. Costs $10, but it includes fries, unlike, say, Burger Lounge.

And to drink? Man, with all this sun streaming through the two open corner sides, I could go for a sunset beer. Jason says they’ve applied for a wine-and-beer license, but it’s probably a couple of months away. So I order a cup of free, fairly plasticky-tasting water.

Five minutes later, out comes the steaming burger. Take a bite. Ooh. Aah. Can taste the garlicky shrimp in the middle. And the cream cheese. And, oh yeah, the sweet-bitter orangey thing.

“We squeeze the orange, but also peel the zest, the skin, and include that to give the flavor an edge,” says Elizabeth.

This is great. I mean, how long since you were interested in what’s in a burger, apart from the so-predictable cheese and bacon and onions?

Jason says they’re planning to put tables and canopies outside. Maybe in time for their wine-and-beer license.

Can’t wait. A place like this makes an area feel suddenly cool.

So, which was the best burger? I’m gonna say Carla’s. My Surf and Turf was beautiful, but in a delicate way. Her Black and Bleu socks it to you with a rich, deep, sweet ’n’ sour thing.

Dang. No way is it too rich for me. Should’ve swapped burgers when I could.

Whatever. I finish up totally…stuffed.

I've eaten here once and like the article said this gringo went for the tacos. Highly didappointed. For $2.50 the the carne asada taco should have been 99 cent. Didn't have as much meat as the street tacos for a buck and they didn't even have cilantro. Also ordered a salad which was also disappointing. Skimpy on the toppings and I left hungry after spending almost 10 bucks. Went up the street to the Jamaican place a got a meat patty. Might or might not go back to try the burger.