The 39 Steps at Lamb's Players; Burn This at Different Stages 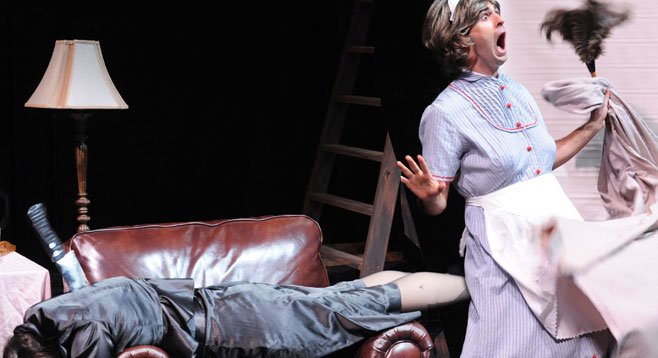 Except for two tall, A-frame ladders, two small balconies, and a solitary light bulb, the stage for Lamb’s Players is bare. Even the coal-black rear wall is exposed. Take away the balconies and Michael McKeon’s set would have all the minimalist makings for a production of Our Town. Instead, as McKeon’s props zoom on and off and four actors perform The 39 Steps in a pace as up-tempo — nay, madcap — as Our Town is stately.

In Alfred Hitchcock’s classic movie (1935), Richard Hannay sits in his fashionable West End flat. He’s alone, except for a scotch and soda and his thoughts. Not a good thing when the thoughts turn to how little he’ll matter on the Great Scoreboard in the Sky. So he decides to do something “utterly pointless. Something — I know! Visit the theater!”

In the movie, caught in a web of international intrigue, he becomes a villain wanted in three continents. In Patrick Barlow’s stage adaptation, Hannay goes through a warped and wobbly looking glass and enters the Actor’s Nightmare: he has a clue about a “vital secret” but doesn’t have a clue what to do or even, for that matter, what to say. So he flees in trains and cars and dashes hither and yon, maybe 39 steps per second, as all manner of constabularies, 38½ steps behind, chomp at his heels.

The Lamb’s show, brisk and beautifully timed, is goofy fun. David S. Humphrey (Hannay), Kelsey Venter, Jesse Abeel, and Robert Smyth sprint through blink-of-an-eye mini-scenes and costume changes. They don coats, hats, wigs (costumes by Jemima Dutra, piles of puffy hair by Coni), speak in various accents, and, often stacked with enough clothing for a Scottish winter, contort through tiny windowpanes and fences — at one point handcuffed, which Humphrey and Venter turn into a hilarious bit of fractured logic.

Some of the best parts happen when a prop refuses to behave, as when the phone doesn’t ring, the actors pause, then answer it, and then it rings. Or when Abeel and Smyth, who must play a dozen roles each, unfurl a long piece of cloth. They flap it up and down to imitate a flowing river. But mostly up, which prevents Humphrey and Venter from crossing. Finally, Venter just loses it. She drops character and, as an irate Kelsey Venter who’s put up with this nonsense in rehearsal after rehearsal, screams “enough already!”

These supposed mishaps skewer the campy bits the way the show skewers the movie. At the same time they underline the dexterity of the cast and Deborah Gilmour Smyth’s spot-on direction. They also pay homage, in a quiet way, to the difficulties of performing before a live audience. Hitchcock could shout “cut.” The only cutting the Lamb’s cast can do is to the chase.

Different Stages, which began in 2011, took that name because the company performs at different venues, from Oceanside and Vista to Ocean Beach and University Heights. Their current offering, Lanford Wilson’s Burn This, is a big, tough play for any group. The choice shows ambition, though the results are mixed.

In both acts, someone complains moving in circles: Pale, an apparent wacko, can’t find a parking space in Lower Manhattan; on New Year’s Eve, Larry, a gay advertising executive, flew over JFK for an hour and 45 minutes. Everyone onboard missed the party.

When the play begins, Pale, Larry, Burton, and Anna have all been circling in place. The sudden death of Robbie, a dancer who died in a freak auto accident, stirs not only grief but a need to kick-start their lives. Anna will choreograph rather than dance; her about-to-be-jilted boyfriend, Burton, will stop scripting gunk and write a screenplay with “passion...something felt much deeper than we know”; Robbie’s older brother Pale will crack his self-protecting, macho veneer and face his greatest fear, intimacy. Larry, who provides a running, and often funny commentary on the scene, may miss the party once again.

Wilson never mentions it, but in some ways Burn This could be an AIDS play. It premiered in 1987, around the time the affliction had finally received national attention. In this sense, this is Wilson’s response to sudden, unthinkable tragedy. After the funeral, a fractured Anna says “something should come from this week.”

In some ways, it’s hard to assess Different Stages’ opening night. Friends in the audience rooted the cast on and disrupted timing. The scenes wavered in quality. They ranged from one of the best fight scenes in some time (unlike most we see, Michael Nieto’s didn’t look choreographed) to several slow patches and deliveries that verged on mumbling.

The Hall at Swedenborg Church has a quirk: the low proscenium brow swallows sounds; actors needed to project outward much more, enunciate, and make the dialogue “burn” throughout.

Anna could use a bit more spontaneity, but this is some of Melissa Coleman Reed’s best work. She moves as Anna says, from a “totally clean slate” to creative and emotional possibilities. Pale is actually two people: responsible Jimmy and loose-cannon Pale. A tattooed Brian Burke doesn’t play him over-the-top (or, as performed on Broadway, “over-the-Malkovich”), but he’s more believable as tough-talking Pale than the frightened Jimmy within.

When Burn This premiered, several critics thought the ending — Anna and Pale a twosome? — was too far-fetched, too oil and water. But if Coleman-Reed and Burke explored the “status games” Anna and Pale play — ongoing attempts to “top” each other in words and deeds — they could make the apparent opposites more compatible than they first appear.