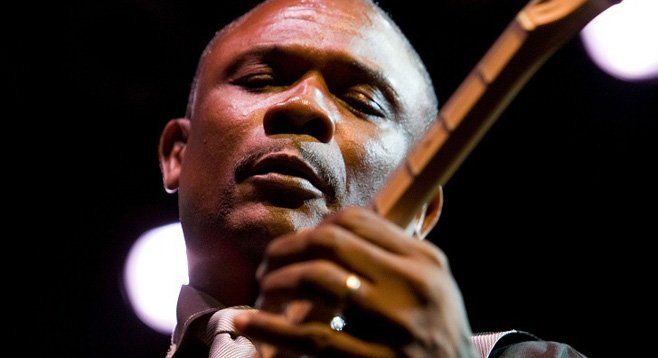 “I wanted to come home,” Michael Stone tells the Reader. “My wife and my son are here.” This year witnessed the return of two bluesmen who, for various reasons, took extended leaves of absence from San Diego stages. The most recent, Stone, 59, is known as Stoney B: “I had been having a recurring problem with drugs. That’s one of my vices,” Stone says by phone from his East Village apartment. “So I just left. I was gone from San Diego from November [2012] to May. I went to New Orleans. When Jazz Fest was over, I came back.”

The guitarist/singer was born and raised in Chicago, then moved to Mississippi to soak up blues culture before a 14-year stopover in New Orleans. Stone was uprooted by Katrina and landed in San Diego in 2007. The Stoney B Blues band has since appeared at various area nightclubs and when the drugs began flowing a little too freely, Stone says he retreated to New Orleans. Is he happy to be back?

“I’m happy today to be alive. Most of the people I grew up with are dead. I grew up in the Robert Taylor homes, the ghetto in Chicago. Maybe only 3 out of 15 of my friends are still alive, and my musical friends? They’re dropping like flies. I’m grateful to be alive. And I’m still playing the blues.”

Guitarist Lafayette Falquay came out of retirement last November to cover for Stoney B. Why? “Because they asked me to. The only reason I play music is because I’m asked to play. Otherwise, I probably wouldn’t. I have just as much fun playing right here.” Meaning, alone in his man hole — not a man cave, he admonishes, but a man hole, a single-car garage attached to his College Grove–area home. His guitars and his keyboards are in there, with carpet and a sofa and a wide-screen television. It feels like 9 at night inside.

“In Austin, I was known as a bass player. Angela Estrela — I played with her. Her and Stevie [Ray Vaughan] were good friends.” He thinks they might have gigged at a place called Littlefield’s. “I think it was on 11th Street. You know, the east side of Austin was predominately black, but it was invaded by hippies.” He laughs.

Falquay won’t state his age: “Hey, man!” He moved to San Diego in 1978. “My wife at the time worked for the IRS. We lived in Fresno before we came to San Diego.” He says he stopped playing when he got married, that he didn’t even own a guitar when they moved here. “I didn’t play for ten years. My wife was glad to have me home.” For a time, Falquay fronted the Leasebreakers. Then he abruptly quit music again five or six years ago. Since his comeback in November, Jimmy Love’s, the Gaslamp Speakeasy, House of Blues, Hennessey’s, and Hooley’s have all asked him to play.