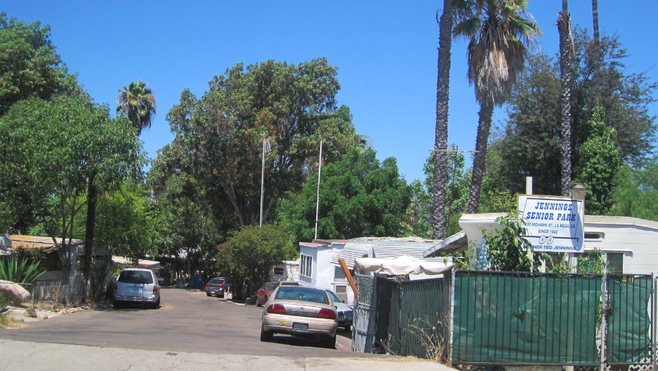 A woman at the August 13 La Mesa City Council meeting asked for help curtailing drug activity at the Mohawk Street mobile-home park, where she has lived since 2000.

"For the past eight years or more, we've been having a lot of problems with drug dealers," said the resident. "I've called the police; my neighbors called the police. I've been here several times complaining about it. I look outside my window. People come out. I've watched drug deals right in their cars. And people driving in on bikes, walking in….

“People have overdosed in various drug trailers. Police have been here, ambulances [for overdoses]. I need some help; my neighbors need help," the woman said during the public comment portion of the meeting.

According to state law, the council cannot discuss or take action on remarks about non-agenda items. However, city manager David Witt addressed the matter.

"We have followed up in the past," Witt said. Police chief Ed Aceves "has certainly been directly involved. I've spoken with him again. We will continue to monitor it and do whatever we can. Even though we have not made the problem go away…[we] have taken the steps that we are allowed to, including working with the property owner. It's not on the agenda or we could talk about it in much more detail."

Councilwoman Ruth Sterling said, "The police have been working diligently. They've made arrests. But because of our system, they get [imprisoned] and they're released, and so the druggies come right back."

The mobile-home park is on the 7300 block of Mohawk Street, which is one block north of El Cajon Boulevard. A sign at the entrance reads, "Jennings Senior Park…Since 1942. Owner Ted Jennings."

In an August 17 interview, the woman discussed her concerns. However, she became worried about retaliation and didn't want her name used in this story. Neither did a neighbor who also attended the council meeting. Antoinette (not her real name) and Caesar (not his real name) chose names that wouldn't be associated with them or their neighbors.

Antoinette said that Jennings managed the park until he fell and was hospitalized three weeks ago. She said that problems started about nine years ago. "That's when Jennings's son…and his girlfriend moved in. Younger people moved into the park.”

Antoinette said there now seven "drug" trailers. Structures are "boarded up so you can't see in. I've watched people do drugs in front of the trailer," she said. Antoinette observed "little baggies with a white substance inside."

About four years ago she found a glass bulb, "something that looked like a burner" by her car. "I took it to the police station," she said. Caesar said someone broke into his trailer several weeks ago and stole his laptop. Both are afraid to leave their trailers. "We're prisoners here," he said.

In an August 19 interview, police spokesman Lt. Matt Nicholass said police "are aware" of the situation and have been working with the property owner. In addition, officers do "extra patrols in the area," he said. "There have been reports of people using drugs in the area. We have made arrests."