Where will the gallinas of Golden Hill go?

Resident told she must get rid of beloved chickens 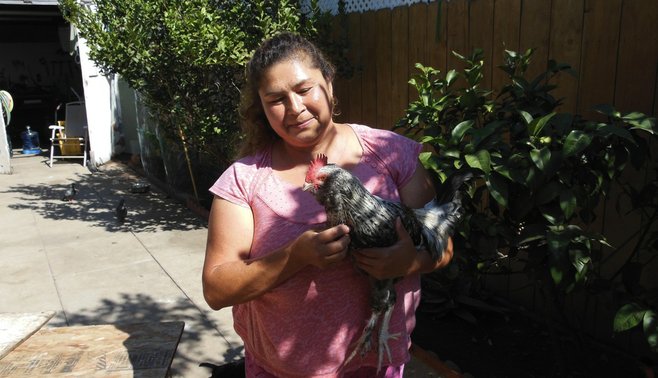 Maricela Martinez has kept her happy chickens in her yard at 28th and A, across from the golf course, right next to the sign that demarcates South Park from Golden Hill, for seven years. Signs on the fence, now taken down, proclaimed “Happy Chickens” and eggs for sale and showed pictures of the hens. A hand-lettered sign, in both Spanish and English, invites visitors to “pull the cord to ring the bell.”

While we talk on her porch on a Friday afternoon, neighbors walk by and greet Martinez, who has lived in the same house for 28 years. Gallinas (Spanish for hens) roam freely about on the fenced premises, taking dirt baths and pecking at the ripe guayaba berries growing on bushes. Statuettes of Jesus and the Virgin Mary and others decorate the yard. A little white poodle named Chico quietly observes us as we walk around. When he thinks we’re all distracted, he slips into one of the coops and tries to grab an egg out of a nest. Martinez’s son José stops him before he gets the chance.

But Chico, friendly to the hens and content to be part of this family that cares for animals, is not on the list of Martinez’s troubles. Casting a pall of sadness over the happy chickens is the fact that the city has informed her that she must get rid of most of her hens and all of her roosters. She has more than what code allows, and her property is not large enough meet requirements for the number she has there. Her eyes get misty as she tells us she must sell the chickens, whom she considers her children.

For Martinez, who grew up in Guadalajara, chickens are not just fowl, they’re family. “It’s a sad story,” she warns, “but I’ll tell you…. When I was a young girl, starting at about age three, when my father would get upset with me and cast me out of the house, I would go to the chicken coop to sleep. The hens would gather around me and keep me warm for the night.”

“What makes your chickens happy?” I ask. 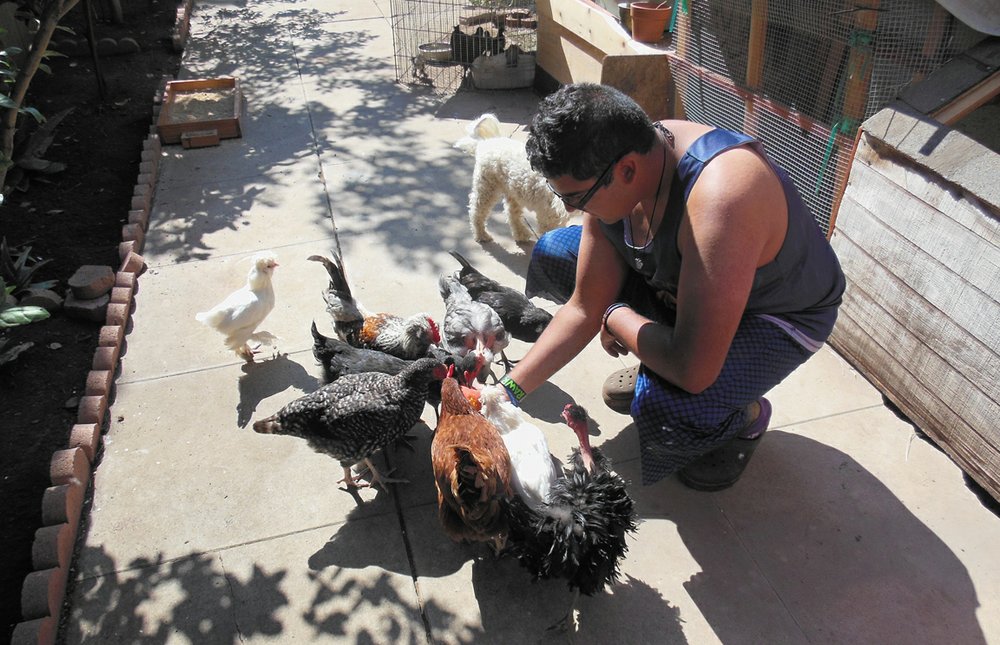 José feeds the chickens a peach

For one thing, during the day they are allowed to range freely around the small urban plot the Martinez family calls home. And they get to eat fresh fruit, which José demonstrates by picking a peach from a tree in the front yard and holding it out for the brood. To our amazement, the hens gather around and take turns pecking at the ripe peach, making charming little clucks. For the most part, the hens are tranquil and quiet, following us around curiously and pecking gently at our ankles while we munch on peaches.

José, 18, has given all the chickens names, but he says he can’t remember them all. He spends a good part of his day checking on the birds, cleaning up after them, and greeting inquisitive passersby. He tells us that kids on field trips from Einstein Academy, a few blocks away, come to peer at the chickens, still a rarity despite the growing popularity of city farming.

In 2012, the City of San Diego amended its municipal code to accommodate the community’s growing interest in raising chickens within city limits. Previously, residents could have up to 25 chickens only if the coop was 50 feet away from any residential buildings. In an urban environment, 50 feet can be more than the whole property. The 2012 amendment allows for up to 5 hens (roosters prohibited) if the coop is at least 5 feet from property lines, up to 15 if the coop is 15 feet back, and up to 25 under the old regulations.

But on the Martinez property, there isn’t a place outside that is 50 feet away from any of the edges of the lot, and she’s got more than 25 chickens.

She points out two white hens who she says came from green eggs, and then laughingly points out a black-and-white rooster she calls la vaca (the cow). José calls it el italiano because it’s an Ancona, a breed developed in Italy.

Several different varieties are represented in Doña Martinez’s collection. Among others, there’s what looks like a Holland, a Plymouth Rock, and two snowy white ones with crowns of feathers that might be Polish hens. When she picks up her hens to show us their unique features, the birds relax in her arms, soothed by her mothering.