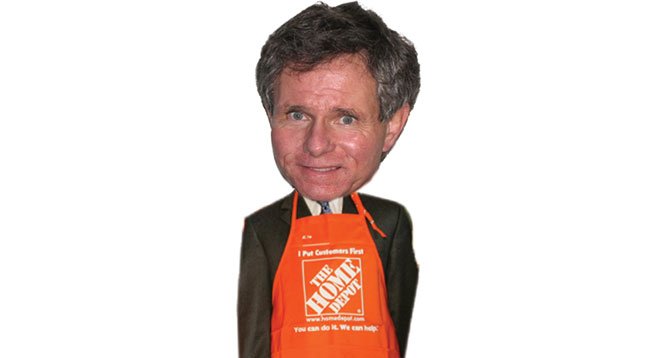 The firm has made a bundle over the past decade promoting a desalination plant that just happened to be favored by Sanders and his big-money campaign backers. Says the firm’s website: “Public Policy Strategies has conducted an extensive public education and outreach program since 2002. A wide variety of local and regional organizations have been contacted and involved with the project, including elected officials, local government agencies, planning agencies, business and civic groups, area residents, students, environmental organizations and the news media.” Shepard also got major money from Home Depot to deploy its once formidable influence to fight big labor’s so-called “Big-Box Ordinance.”

In Filner’s brief heyday, back in January of this year, Public Policy hosted a mayoral campaign debt-payback party in its downtown offices, attended by such local influence-peddling luminaries as Marcela Escobar-Eck, who’s been employed by such well-heeled clients as McMillin-NTC and Kilroy Realty. The bash raised $9000, according to a subsequent disclosure report.

But based on its most recent quarterly lobbyist disclosure filing, Shepard’s business dropped off in the months before Filner-gate blew. According to the document, posted online by the city clerk on July 31, Public Policy was paid $3000 by American Medical Response Ambulance Service in the second quarter of this year to lobby for approval of new paramedic contract. Miller and another Shepard employee, Khoa Nguyen, visited with GOP city-council members Mark Kersey and Scott Sherman and their staffs on that issue, the document shows. The company’s biggest client was Xerox Business Services, which paid $8000 for the firm to lobby regarding a technology “outsourcing” deal. Miller talked to mayoral staffer Scott Chadwick and District 3 aide Katie Keach on that one. SDG&E forked over just $2500 for Public Policy to “monitor decisions related to City energy policy.” And Shepard personally picked up $4500 from the “Mayor Bob Filner for San Diego Committee.”