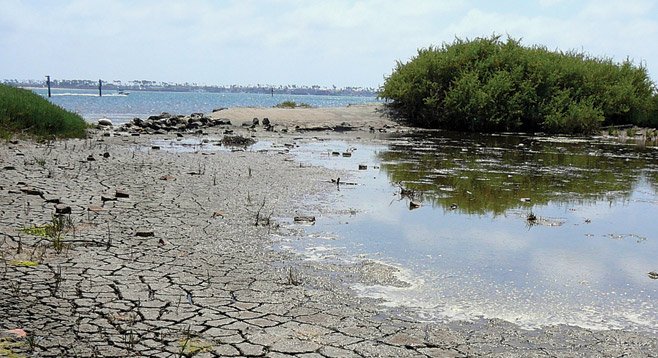 This short stroll within the Sweetwater Marsh National Wildlife Refuge can be done at different times of the day to see the difference that both a high tide and low tide can have on marsh lands. The Living Coast Discovery Center, formerly known as the Chula Vista Nature Center, sits in the middle of this 326-acre refuge, which is also the headquarters for the San Diego National Wildlife Refuge. Interpretive information in the center explains the relationship between the bay, the marsh, and uplands habitat. The marsh is the transition between bay and upland areas that are not affected by tidal changes.

The center was opened in 1987 and two years later the National Fish and Wildlife Service established a refuge here to conserve and restore habitats and species in the salt marsh at Gunpowder Point. The name of the point derives from the fact that during World War I, the Hercules Powder Company processed giant kelp (Macrocystis pyrifera) that grows offshore to produce potash, an ingredient of black gunpowder, and acetone, a component of cordite, a smokeless powder. In 1916 the Chula Vista plant was the largest kelp-processing plant along the Southern California coast, with 1500 employees. The plant was abandoned after World War I. The concrete foundation of the plant is still visible.

The refuge is a great place for birders and for an introduction to both shore birds and birds of prey for novices. The center has interpretive information about birds that explains the function of the various types of bills, toes, and leg length that determine how a bird feeds and rests. Birds in the sandpiper family (western sandpiper, long-billed curlew, American avocet, marbled godwit, dowitcher) have thin, straight, or curved bills always longer than their heads. Their long legs allow them to wade in water and walk along mud flats looking for food. Plovers have bills shorter than their heads and can be identified by their characteristic sprints and abrupt stops. They also have long legs for wading. Diving birds are heavy birds that are clumsy on land and include western grebe, lesser scaup, surf scooter, bufflehead, brown pelicans, California least tern, cormorant, and ruddy duck.

The center has an aviary with various raptors, including a golden eagle, bald eagle, American kestrel, long-eared owl, turkey vulture, and various falcons. There is also a clapper rail aviary.

The trail begins across from the visitor center and heads west toward the bay. The trail spur to the right leads to a viewpoint where the remnants of the old gunpowder works may be seen. The spur trails to the left lead to other bay overviews, a pond, and mudflats. Plants seen on this walk include mulefat, bladderpod, tobacco, flat-top buckwheat, lemonadeberry, black sage, white sage, coastal sagebrush, alkali heath, coast monkeyflower, pickleweed, cordgrass, gumplant, coast cholla, tobacco, and toyon.