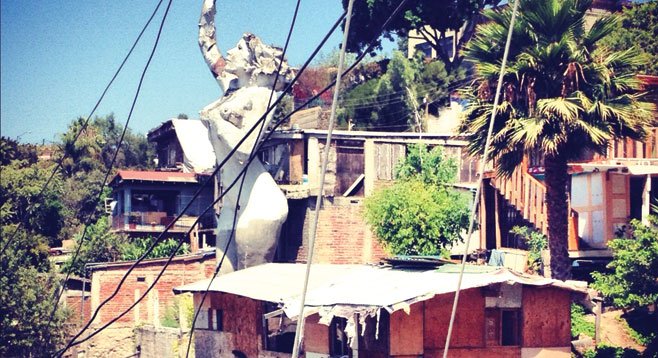 I was driving home from San Diego and caught Vivian Dunbar’s beautiful, stimulating letter regarding Baja beauty (Letters: “Beauty and Grace in Baja”). Thanks for reminding people of the magic of Mexico — my home for the past 29 years.

Just a reminder the first weekend in September is our grand art festival in Playas de Tijuana, Festiarte. It is the largest art fair in Baja.

The author of “No Duty to Retreat” (Letters) is correct in his response. Cal PC Sec 198.5 was enacted in the 1984 California Home Protection Bill of Rights. (The last time I cracked open the Cal PC was in 1982.)

The state presumes you have reasonable fear if an intruder comes in your house. No duty to retreat, true, but if you do shoot an intruder in your house, don’t talk to the cops without a lawyer present. The legal presumption is rebuttable in court, and you can expect to be charged. You probably will spend the night in jail and be arraigned in a court of law. You’d better be sure your shooting is justified and don’t help the cops or the D.A. railroad you into prison. Use your 5th Amendment rights and let your lawyer do your talking for you.

If you own a gun for home protection, know your rights and be prepared for the legal and civil fight to come, if you use it!

I’d like to comment on the story “Baja Is Back,” and the letter, “Defending Marines,” by Name Withheld, complaining about the cover blurb.

My wife and I used to go to TJ for dinner often but we haven’t been there at all in years. It’s not the violence that keeps us away, it’s the obscene wait-time at the border to return. Baja won’t be back for us until our government does something about that.

Regarding the letter, the Marine who wouldn’t even sign his name writes that he read “the entire article.” Somehow, I doubt that because he didn’t even read the entire blurb which states the “…nasty bar full of Marines is not going to fly anymore.” That means it no longer exists. In other words, Mr. Marine, you had nothing to defend because there was no attack.

In reply to the article, “Border Patrol Sued over Fatal Shooting” (News Ticker) regarding the Mexican national who illegally entered into San Diego, and was shot and killed by a U.S. Border Patrol agent when he allegedly threw rocks and a stick embedded with nails at the agent. The wife of the deceased is now suing almost everyone in the federal government. Both sides will have their day in court. The question will then be: Can the agent articulate that he believed his life was in danger, or was the agent’s account a fabrication?

I disagree, however, when the widow downplays the issue on whether rocks can be construed as deadly force. Sticks and stones do break bones and they can be deadly, too. Wasn’t it reported somewhere, perhaps in the Old Testament, where a guy named David slung his slingshot and killed a big dude named Goliath, with a rock to the noggin?

I appreciate the variety of subjects covered and the fine writing in your publication. The one section that irritates me is the movie reviews. After having read so many of your highly critical movie reviews through the years, it comes across to me that your reviewers feel compelled to find major faults in high-quality movies (to ensure job security, perhaps).

I just saw Woody Allen’s Blue Jasmine tonight, and I wholeheartedly disagree with the reviewer’s comment about Allen’s “artless” incorporation of a flashback structure. The “artless” comment is ironic. If there were anything “artless” about Allen’s pictures, why have art house theaters been the primary ones screening Allen’s films through the years?

Allen’s use of the flashback structure is a highly artistic feature of his films; he employs skillful application that becomes an integral element of the movie, even with flashback moments sort of standing alone as vignettes and reminding us that history repeats itself, not just in the history books but within our own lives.

Okay, on to the review that has irritated me most: Up, the animated feature reviewed previously by Duncan Shepherd, in which Mr. Shepherd referred to the movie’s music as “insipid.” His comprehension was shortsighted because the carousel-like quality of the music fit perfectly into the story and punctuated the emotions and experiences of the characters so well.

I’ve been reading your magazine for 20 years. I’m disappointed to hear that Diary of a Diva is every other week now — that’s kind of light. And I’m disappointed that there’s no more Straight From the Hip anymore. I understand Matthew Alice passed away, but maybe you could have some sort of Dear Abby in your paper. Then, towards the back, you used to have a column where you’d ask a question of like five different people [Off the Cuff], and that’s not there anymore.

But you know who you still have? You have Don Bauder. He’s just horrible! His article on Papa Doug Manchester was so pointless and stupid. I mean, Papa Doug is really a pretty impressive person in terms of what he’s achieved. Don Bauder is actually writing about how Manchester is in little snippets in the movies? What is the point?!

Don Bauder is terrible. Get rid of him; bring Diary of a Diva back every week; get a Dear Abby section going; and I’d love it if you’d ask a question of five different people.

I hope this helps your paper, because I’m not even gonna pick it up too much anymore. It’s just getting too thin.

The Straight From the Hip column was always the first article I looked at each week in the Reader. Of course, I noticed in recent weeks that it was not there.

Why in the world did the Reader not mention that the author had died, and that was why the column was discontinued? Why wait until a disappointed reader, Alicia Brown, expressed her disappointment at the column’s absence? It would have been so easy for you to print a note such as the one that appears in italics on page 4 of the July 18 issue (Letters).

I fear that you are dismantling the Reader by removing or reducing the flavor of what makes it so endearing — i.e., Matthew Alice and Barbarella. This is a common ploy for newspapers to save money. But what a false savings.

Case in point, Barbarella. She’s a good writer who basically tells stories about her own life and family. We may hold different values, but what fun it is to eavesdrop on another life. After awhile it’s as if you know Barbarella. So, you care when her father becomes ill. She writes about life’s struggles. Sometimes minute, but never dull.

By gutting the Reader of a truly intriguing columnist like the aforementioned, you remove part of the soul. Please rethink your strategy. (Or, lay off some of the big guys who make these ludicrous decisions.)