Rockin' and rollin' all night long 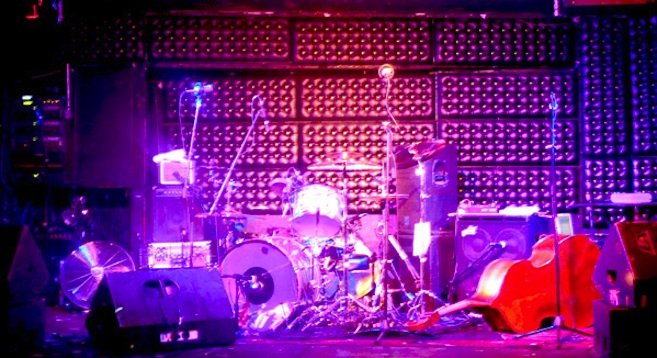 A slice of history in the midst of Ocean Beach, Winstons dates back to 1986 and retains that wonderful sense of all things hippie. That means Dead tributes and jam bands and reggae groups and such, but some fairly hefty national blues-rock acts have rolled through there as well, including Lucky Peterson, Poppa Chubby, Jimmy Thackeray, and the late Bugs Henderson. Steel Pulse and Slightly Stoopid have been there, and ’80s favorites the Blitz Brothers chose the Winstons stage for their first reunion. Massive improvement: the west wall now opens out onto the sidewalk. You get daylight, ocean air, and no shortage of people-watching.

The White Stripes, Smashing Pumpkins, Nirvana, Weezer, the Cult, Modest Mouse, and countless more indie rockers have played the stage with the padded walls that, in truth, came from an ice cream parlor. Owners Tim Mays and Bob Bennett essentially bought the interior furnishings of a Farrell’s Ice Cream when it folded. The stuff became the new decor for the original Casbah, which opened in 1989 at 2812 Kettner. In its present 220+ capacity location since 1994, the iconic stage backdrop has been replaced at least once. But the question remains: does that padding help cut the noise any for the tenants in the airport view apartments perched over the night club?

With 36 years as a music venue behind them, the Brick first saw life as a club called the Spirit of ’76, named for the year it opened: 1976. The Spirit was the main night spot in pre-indie rock San Diego, where bands that wrote their own music could get stage time. And, it was considered a boost to one’s standing among such local musicians to merit a mention in one of Spirit founder Jerry Herrera’s self-penned Reader adverts. It became Brick by Brick in 1995 and after, the rock got harder: Thin Lizzy played there, as have Blue Oyster Cult, Megadeth, Uli Jon Roth, Zac Brown Band, and, if memory serves, the late Wendy O. Williams.

The backstory: the club first opened its doors as Ralph and Eddies in 1958, next door to what is now Spin Records. Ralph and Eddie were Marine buddies. Rumor has it that Eddie’s body was buried under Spin Records after he passed. Back then, they had caged monkeys, a boa constrictor, and a pet raccoon. The club’s name was changed to Boar Cross’n in the early ’90s. Now, they are a 280+ capacity home base for rockers past and present, such as Unwritten Law, Fenix TX, Buck O Nine, Nihilist, Killer Priest of Wu-Tang, Eydea & Abilities, Glue, Visionaries, Kurtis Blow, Sprung Monkey, Dead Prez, and Trouble in the Wind.

An anchor tenant in the local rock music community since 1974, the Belly Up has become something of a touristy home for tribute and reggae and jam bands in recent years. But the intimate 600-capacity venue is still financially attractive to mid-size national touring acts. Joe Walsh debuted his new solo release Analog Man there last year. Blues rocker John Mayall has been known to book stage time along with the English Beat, B.B. King, Leon Russell, the Black Eyed Peas, Death Cab for Cutie, the Red Hot Chili Peppers, No Doubt, Ludacris, Jason Mraz, Buddy Guy, and Chris Isaak.

A neighborhood stop for indie, metal, pop punk, and electronic road bands, and pretty much everything in between. Consider Foster the People, Tune-Yards, The Ataris, Ty Segall, Grimes, Kris Allen, Cults, the Black Heart Procession, the War on Drugs, Wax Tailor, Cannibal Ox, and Mouse on Mars. They’ve all played this night club located on the outskirts of Normal Heights along El Cajon Boulevard. Some will recall that it was once called Chasers before present owners Cuong Nguyen and Adam Cook bought the place and changed the name to the Soda Bar in 2008.

The first Hot Snakes reunion show happened at Bar Pink… and why not? Hot Snakes founder (and Rocket from the Crypt alumnus) John Reis and his wife Ami are co-owners of the little North Park hipster night club along with two other couples: Lorenzo & Barbara Garcia, and Robin Chiki & Dang Nguyen. It’s a small and eclectic music depot (180 capacity) with an even smaller stage, but no matter: the Styletones, a multipiece horn band, had a club residency here; and Surfer Blood, Matt Skiba of Alkaline Trio, Gene Loves Jezebel, the Zeros, and Everest, among others, have all managed.

There’s something about the tradition of the true dive bar. Like clockwork, the first to arrive are members of the day shift. They are the jukebox regulars and such that seek haven in the midday darkness. Later comes the night shift, meaning bands and their followers. This cycle pretty much describes the Kensington Club in Kensington. Young bands and old bands, and all of them eclectic: the Soft Pack, the Sonics, the B-Side Players, Fast Crows, and the Morlocks have played the side room next door to the Ken along with Deadbolt, possibly one of the strangest of San Diego bands and who had something of a residency there in years past.

With the recent shuttering of both 4th and B and Little Italy’s Anthology, the House of Blues is essentially the last man standing of the large music venues that once drew music fans to downtown San Diego. A national franchise not actually known for the booking of blues music, HOB has split-level viewing areas for the wealth of mid-size pop and rock tours that pass through town: Anthrax, George Lynch, and Coheed and Cambria on the heavy end of the scale, all the way up the pop-funk ladder to G. Love and Special Sauce. The theme park of local venues.