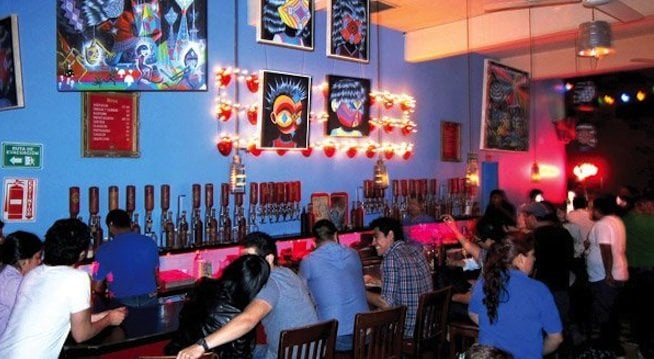 We’ve all heard the story by now: 9/11-mania brought the border to a halt. Tourism died. Tijuana got bad. Locals stopped going out. Locals got tired of not going out. La Mezcalera opened. Locals went out. La Sexta blossomed. Groovy nightlife abounds. Tourists (though largely of a different ilk) are returning.

As such, these are a few of my favorite haunts presented as a walking/taxi tour, because part of the thrill of Tijuana nightlife is that street addresses only evoke shrugs from cabbies, and even high-end hangouts can’t seem to keep their websites hosted, much less maintained.

Your night begins at El Tinieblo, an intimate mezcal bar attached to La Corriente Cevicheria Nais (Sexta and Madero, a five-dollar cab ride from the border). Furnished with Victorian wingback chairs, Beetlejuice-pinstriped walls, electric candelabras, and a mounted cougar, this quirky lounge is often ground zero for hep TJ. Dine on fresh seafood tostadas (try “El Placer” — breaded shrimp on a thin slice of jicama) and mezcalita cocktails to the sounds of an acid-jazz band or the cumbia-informed dance jams of local tribal guarachero jockey Yelram Selectah, and stick around for after-hours parties on the back patio most weekends.

A half-block south on Madero sits Moustache Bar. Opened around three years ago by the folks behind Indie Go (formerly located in the trendy nightlife enclave of Callejon de la Sexta), Moustache shares its backyard with eclectic art space Otras Obras. Not content with the customary caguama (pronounced ca-wa-ma: a 32-ounce bottle of beer), the bar offers one-liter carafes of Negro Modelo to sip on while acts such as the experimental electronic Perros Cobardes or ruidosón godfather María y José play to a full house. Often free and always lively, Moustache cultivates a community vibe that resembles North Park’s Bar Pink most nights of the week. Follow the spiral staircase by the bathroom to get a bird’s-eye view of the party from the overhead lounge.

Head west on Sexta and poke into the time-honored cantina Dandy Del Sur (canonized by Nortec Collective’s song of the same name) facing La Mezcalera and drink a michelada (beer with lime, salt, and spices) with some chicharrones de harina (fried wheat snacks) while rubbing elbows with pan-generational barmates to an always-kicking jukebox.

Bar Chips across the street is best reserved for after hours, when the tenacious congregate after 2 a.m. to drink $3 caguamas and feed the metal-centric jukebox until the small hours of morning.

Zebra Mexican Pub on the corner of Sexta and Revolución serves about 70 international beers, cocktails, and bar eats topping out at around five bucks. Hang around the spacious beer hall for live music and movies, or hunker down over a pint at the bar’s street-corner extension and watch the jubilant bedlam of Friday-night Zona Centro unfold.

Cruise north on Revo and grab a dollar Modelo or tequila shot at Le Galleria pizza shop before poking into the renovated art alleyway of Pasaje Rodriguez (next to Caliente between Third and Fourth), which comes to life every first Friday with galleries, skate shops, craft beer and wine bars, and music. Of special interest is Mamut, a relatively new hole-in-the-wall brewing operation that offers several styles of beer at $1.25 a bottle.

Across the street in Pasaje Gómez (descend the stairs left of Hotel Lafayette) lies Kafe Mua, a cozy coffee shop that looks more like a New Age reading room than a downtown TJ café. Hydrate with a sabila con arandanos (aloe juice with blueberries) or puff on a hookah surrounded by live music, art, and a small shop showcasing local fashion and jewelry.

Beneath the iconic Tijuana arch you’ll find a handful of Mexican Bukowskis nursing regrets and cervezas at the ever-divey Nelson Bar. If the lingering smoke and classic-rock jukebox don’t do it for you, the vintage Hombres and Mujeres signs glowing over the bathrooms are, at the very least, prime Instagram fodder.

Hook a left on First into legendary Zona Norte and check out Dragon Rojo, an archetypal red-light cantina that plays host to wild bands and drunken crowds many weekends.

Keep going and take your first right to reach Bar Zacazonapan. A suggestion to visit the after-hours “Zacas” almost always comes with a wink and a grin, and descending into the basement bar, you’ll quickly realize why. A thick haze of pungent smoke shrouds the seedy drinking dungeon, making it more of a novelty than a mainstay.

Wanna get away from the strip? Hop a cab to El Tigre Bar in Plaza Fiesta, a Spanish village of nightclubs on Paseo de los Héroes. Spackled in show posters and Obey-style tiger wheatpastes, El Tigre offers around 15 house cocktails ($2) to accompany a burger, vegan chili fries, and rowdy punk shows on their open-air patio.

Cab out to Baja Craft Beers (Agua Caliente and Orizaba by the Pemex) near the gastronomy district and sample from over 30 taps, 100+ bottled beers, and wines from both sides of the border in Tijuana’s (and perhaps all of northern Mexico’s) top tasting room.

Jinx Bar converts a Hippodromo-area strip mall next to the old American consulate into a discreet speakeasy complete with Mason-jar craft cocktails and live jazz. Mojitos, dapper locals, and a long night of underground hobnobbing await.

Far removed from just about everything and about an $8 cab ride from downtown (near the Calimax on Calzada Tecnologico), Nony House serves up live music and homebrewed craft beer — grapefruit IPA, anyone? — to students from the adjacent universities.

All told, Tijuana probably isn’t “the next Berlin” — a sentiment I’ve overheard more than once from wide-eyed out-of-towners visibly mind-blown by the nightlife — but that’s the point. Tijuana doesn’t need to be validated by tired analogies. The place is its own animal. The Xolos are running loose, and the future is wide open. We’ve seen Tijuana at its worst. Now, we are beginning to see it at its best.

Sorry but TJ still has all kinds of travel warnings. I can find everything you just mentioned north of the border and a 100's of places with authentic Mexican food made by authentic Mexican chefs. If I want the authentic mom and pop places to eat ? those are on every corner.

Don't be scared! I'm a very white girl in her 20's and I have lived in TJ for almost two years without a problem. Is that to say bad things don't happen here? No. But they happen everywhere. Tijuana is an interesting and different place to visit, and it's so close! Yes you can find Mexican food and cool bars in SD, but does that mean you never leave it? I hope not. All I'm trying to say is don't be afraid to come down just because of what the media says. When I watch the news for the states, the US looks like a pretty scary place. Tijuana isn't for everybody it's true, but it is for open minded people looking for a good time who would like to explore our culturally rich and fascinating sister city. I love it here :)

I'm with the white girl, except I lived there over 20 years. It isn't what you always read about. I'm North of the border at the moment, but there isn't anything that compares to Tijuana. Nothing here in San Diego, although I won't crush Mexican food here, comes even close to down there. If you aren't comfortable, that's understandable, but don't be fooled by outrageous pieces about how you get shot just crossing the street in Baja. It isn't true. You're likely safer down there than you are in many parts of San Diego. The food is fantastic and the beer is outstanding. And the people - on the whole - are wonderful.