Barbarella's menu for a perfect night out 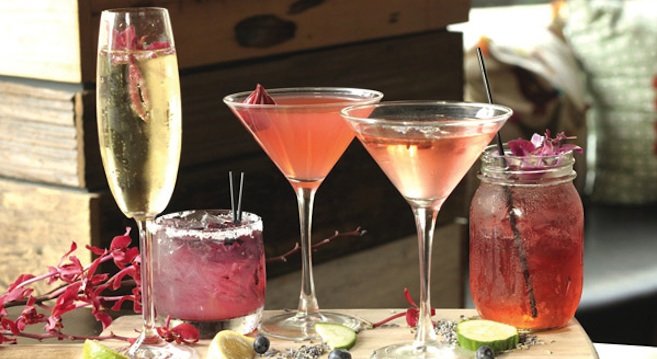 One of the best dining deals in town, this hidden gem is tucked away atop of Midtown’s International Restaurant Row (on India near Washington). Enjoy three courses of finely executed seasonal fare priced at just $20, which is less than the cost of just one dish at many other restaurants. The wine pairing is optional, but at only $15, and with a selection picked by owners Chris and Mary Gluck, it makes this great value even harder to resist. Sample flavors on the weekly changing menu include 11-hour sous vide tri-tip, smoked potato and saffron confit, and broccoli velouté with smoked bacon, crème fraîche, melted cheddar, and leeks. Pairs well with National Comedy Theatre.

Chef Takeaki Tadokoro serves up traditional high-end Japanese fare in a low-end strip mall near Old Town. Here you’ll find minimal decor and welcoming smiles. From seafood miso stew to grilled Chilean sea bass, all dishes are prepared in ways that highlight the natural flavors of each fresh ingredient. When you taste Tadokoro’s sushi and sashimi, you’ll be sampling the closest thing you can get to Japanese cuisine circa 1820. Pairs well with Cygnet Theatre.

Don’t just see a show, be part of one! Two teams of improv experts compete for laughs via a series of hilarious games based on suggestions from the audience. Though the comedians here keep it clean (the venue is appropriate for all ages), even fans of NSFW humor can’t resist belly-laughing at all of the quick witticisms that are as original as each new audience. Pairs well with Extraordinary Desserts.

The company based in the recently remodeled Old Town Theatre is in its tenth season of producing plays and musicals. Playing now and through April is Assassins, with music and lyrics by Stephen Sondheim. According to their latest announcement, selected scripts for the upcoming season have all gone through the “is-this-exciting? filter.” All upcoming shows “concern relationships, love, and the challenges of making personal connections.” Sounds perfect for date night. Pairs well with Churchill Cigar Lounge.

The San Diego Symphony has been performing since 1910 and continues to draw internationally renowned musical talent such as Chinese pianist Lang Lang (October 26), Irish flutist James Galway (November 10), and Israeli-American violinist Itzhak Perlman (January 11 and 12). Housed in the lavish, 84-year-old Copley Symphony Hall (where complimentary cough drops are offered to patrons), the symphony’s offerings run the classical musical gamut from introductory family-friendly performances to in-depth series directed toward aficionados. This is a good choice if you feel like rocking that tuxedo that’s been sitting at the back of your closet. Pairs well with Extraordinary Desserts or Cucina Urbana.

If, to end your evening, you crave a glass of aged tawny port and the relaxing, heady buzz of cigar smoke, take your nightcap here. Choose from 30 fine and rare cigars. If you don’t enjoy pairing your smoke with the aged and viscous sweet stuff, you can also choose from a variety of imported or domestic beer, gourmet sodas such as Hanks Vanilla Cream, champagne, or wine. New to cigars? Ask your server to help you find one that fits your palate.

Easy to mistake for a starter because of its popular fare, Cucina Urbana’s extensive bar is often overlooked. Not only does it boast one of the most interesting wine selections in town, but all bottles are sold at retail prices (with a reasonable $8 corkage fee for those bought in-house). Wine aside, Cucina excels in terms of after-dinner drinks. Be sure to sip the hard-to-find Hooker’s House Bourbon (a bourbon “imported” to Sonoma and finished in pinot noir barrels). Exotic cocktails include a chai daiquiri and rhubarb basil gimlet. Such intriguing flavors make for a great way to end the evening on an interesting note.

End your night with something sweet, paired with your choice of flavored teas, from “fortune cookie” almond to “falling in love” champagne and strawberry blends. As artfully presented as they are delectable, items on the list of petite desserts include a salted caramel chocolate tart, lemon bars, blueberry cheesecake coffee cake, cookies, cupcakes, and more. Looking to go big? Try a slice of the hazelnut-and-chocolate gianduia cake, or the blood orange ricotta torte. This late-night sweet spot has two locations to choose from.