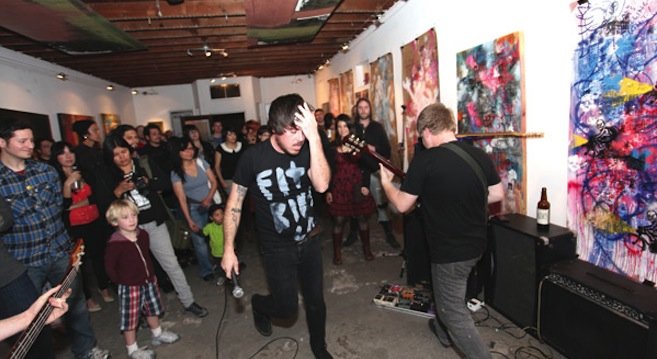 Traditional art shows can be boring. You go for the free wine and cheese, stroll around the gallery, and are in and out in less time than it took to find parking. But it doesn’t have to be like that. There are spaces where one can go to view art and happily make an entire night of it. Art shows have transcended their traditional fuddy-duddy image to often include live art and music, silent auctions, visual projections, and fashion.

The first three of these creative spaces, all located in the Barrio Logan Arts District, operate as community-based, grassroots, multicultural collectives. The rest speak for themselves.

Founded in 2002, Voz Alta Project recently celebrated the third year in their current location. Although only 1000 square feet, this all-ages multidisciplinary space has played host to such nontraditional punk bands as Batwings and the Lumps, while guests rocked out among the current exhibited pieces. The back patio allows one to grab some air while drinking their no-host adult beverages, available for a few bucks in a separate room behind the main gallery. Also view the current exhibit on Thursdays from 7–10pm while Bill Caballero hosts the ten-years-strong live Latin Jazz Jam, dating back to the space’s early days on E Street. 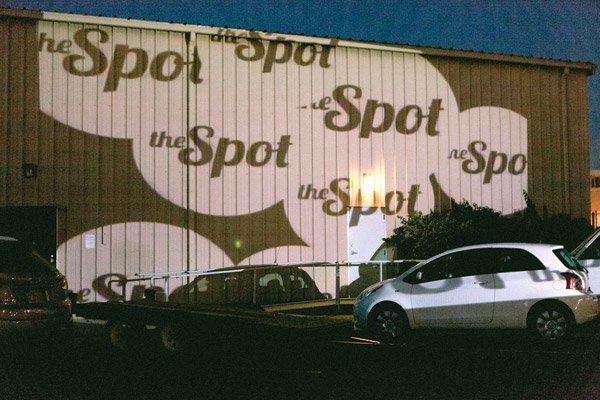 The Spot Barrio Logan is “a hub for artists, designers, and musicians to work together”

Since its inception over two years ago, the Spot has become a “hub for artists, designers, and musicians to work together” in its gallery and studio spaces. Their 2000-square-foot warehouse is a canvas that is “changing constantly,” though, as illustrated by the gallery’s recent renovation. Their Taco Tuesday events have featured “live music of all genres, a spotlight on clothing brands, a pop-up art show or store” and tacos, naturally. Other notables have been a skateboard show with legend Kien “The Donger” Lieu and a custom toy show with over 40 participating artists.

The three-year-old Roots Factory hosts events on the first and last Saturdays and regularly, sometimes “spontaneously,” throughout the month which “combine both art and music in a peaceful family setting.” Having showcased a long list of local and international talent, their huge brick-walled warehouse has also seen events that include record vendors and soul music, workshops and classes, food, fundraising and live art. Look for events from the annual Barrio Film Festival and DIY screen-printing collective School of Guerrilla Arts, which also hosts free workshops on the second Saturday, both of whom call the Roots Factory home.

A converted 1912 warehouse, this extremely busy “industrial-style lounge” and pizza joint has been holding art-centric events every Tuesday — mostly in conjunction with Thumbprint Gallery — for the past four years, except if the Padres are in town. Their motto: “Come for the live art, local artists and DJs…stay for the drink specials.” Tuesday’s themed group art shows have also included dance performances, jewelry and fashion shows, visual projections, and a Jeans 4 Justice charity event. August, Thumbprint Gallery cohosts a pen art group show featuring, among 30+ artists, the surreal works of Gloria Muriel and a pop-up shop by Frances Camaccion Jewelry.

Since opening its doors in 2009, Visual has become an urban and traditional art-supply shop by day and untraditional gallery space at night, striving to be an “open forum for creativity.” Their monthly art shows have played host to live painting, bands, DJs, visual projections, and even pop-up shops, mostly occurring on the 700-square-foot patio — which is almost as big as the storefront. August sees a “Streets to the Gallery” group show while September showcases solo exhibits by ZARD ONE and Bret Barrett. Also of note is their annual Stick ’em Up sticker art show in October.

Established in 1946, this green-certified hotel is decorated with its old-world Hollywood-style roots in mind and has taken a huge leap into the art world with their Artist of the Month showcase every third Thursday. Always highlighting local talents, the event revolves around the space in and around their bar, Imig’s, spilling onto the veranda for glimpses of the live art, bands, and DJs. Previous months saw Jack Stricker’s playful mixed-media paintings, Rebecca Joelson’s photography, live music from the Hollerin and Barbarian, and skateboard-deck art and a live art auction with proceeds supporting a local skatepark.

Starting out in February 2011 as an “art-based collective,” Artlab has blossomed into a full-service art gallery and performance space where musicians regularly perform among the most recent art exhibits. During their opening receptions, this traditional-looking gallery space is transformed into a hip art party. Think ample artwork and people packed into an 18´x33´ space with a DJ in the back threatening to start a dance party. The current exhibit features Bama Art’s abstract India ink–covered canvases, September sees San Diego Comic Fest, while a history of ’60s and ’70s skateboarding is slated for early October.