So, you think you can Zumba? 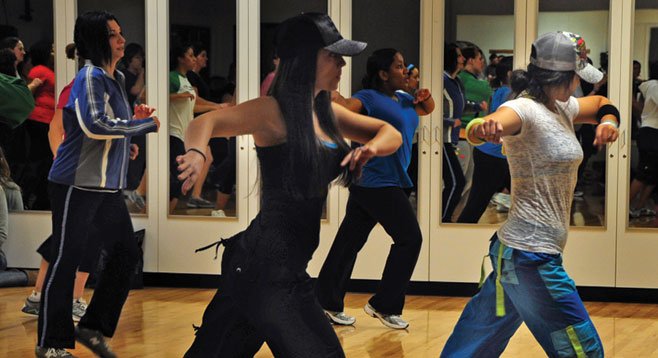 The new wave of rhythmic dance-inspired exercise classes is a constant source of entertainment for me. It would be a lie to say that mild giggles and constant analysis of wardrobe, body type, and execution of moves do NOT happen while I am parked on the treadmill for 40 minutes while class is in session. Between Zumba, hip-hop, and dance kickboxing, there are generally three types of individuals that make up these classes: 1) the obvious flamboyant gay man 2) the oddly rhythmically savvy Asian nerd who probably holds a Dance Dance Revolution record somewhere out there, and finally 3) the middle-aged woman rediscovering her sexual inner goddess.

Every once in a great while, you will see the middle-aged straight man with mediocre moves who sticks out like a sore thumb in a sea of people who make up categories 1 through 3. It just so happened that I managed one day to make eye contact with that random man in the progressive “hip-hop” dance class — after he just completed a successful eight-count ending with a toe-touching high kick. He winked at me. I hope the fact that I was blushing doesn’t inspire him to start twerking next.

Do you think you are a good dancer? Do you feel confident that while at a club you can hold your own? Do you find yourself ridiculing many a dance moves performed by friends, family, and people you have never met? Yeah, me, too.

I am not sure if it was a guilty conscience, a wild hair, or a new-found sense of adventure that drove me to my local gym to sign up for the mid-morning Zumba class, but for whatever reason, I did.

Now, as the person sitting on the stationary bike in front of the all-glass group exercise room, I am thankful — I will be entertained for the next 45 minutes. But now there’s me: the girl participating in the Zumba class, trying to find a location not too close to the front (where the instructor can use you as an example of “what not to do”) but not too close to the back (where the entire gym can see my booty clap).

I already know this will be my first and absolute last time participating in this class, but still, I find myself sizing up the rest of this group and searching for the person who is most likely rhythmically challenged, and who I will stand next to in an effort to feel shamelessly superior. I have no past experience, but I am pretty sure I have selected appropriately by picking a Caucasian, middle-aged female in a polo and khaki shorts. Shame on me if she possesses the moves of Janet Jackson.

About 45 seconds into the first song, I realize two things. One, I don’t dance at the club without a two-drink minimum, so why in hell did I not apply the same rules in this instance? And, two, the bitch in the khaki shorts is already better than me. I should have known she was a sandbagger. I feel like I have no control over my legs, and my arms look like they’re doing the Arsenio Hall after being hit with a tranquilizer dart.

On top of all that, everyone else around me is moving like they mainlined an extra-large Red Bull before the session. I’m winded, I’m thrusting, I’m saddened by the visual of my own self in the mirror in front of me. I’ve just realized that in no way should I feel confident that I can “hold my own” in the club, with or without 1–3 alcoholic beverages. However, I am pleased to say that I will still ridicule and judge others that share the confidence I once had.

The best thing of all comes on my way out, when the lady next to me pats me on the back and says, “you’ll get better next time.”