No injuries in maquiladora neighborhood 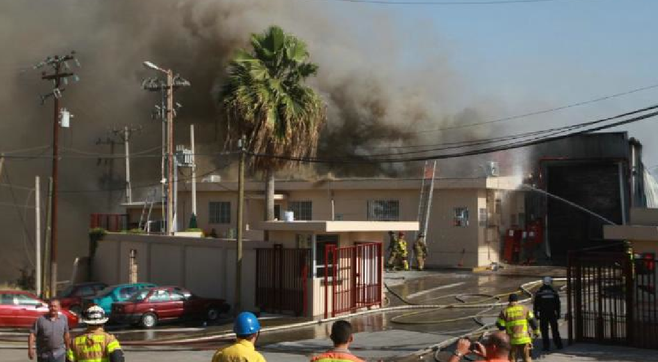 A fire at a Tijuana warehouse for industrial wastes set off several small explosions and led to the evacuation of several nearby maquiladoras and a day-care center for factory workers on the afternoon of April 23.

The fire broke out shortly before 3 p.m. in a warehouse at Grupo Ambiental del Noroeste, a company that processes toxic wastes left over from manufacturing, authorities said. The firm is located in an area known as Ciudad Industrial, in the city's Otay Mesa neighborhood, where many maquiladoras are situated.

"It is a factory for hazardous wastes where we have gas tanks, we have mops saturated with solvents, impregnated with oil, some liquids like solvents, acetones, which are residues from certain industrial processes," Carlos Martínez, director of the city's fire department, told Tijuana’s daily Frontera.

The fire destroyed the warehouse and, although it set off several small explosions, no injuries were reported. Tijuana police said they evacuated around 75 children ranging in age from two months to four years old from a nearby government-sponsored child-care center. The children were taken to police headquarters.

Police said they also assisted in the evacuation of workers at nearby factories in the heavily industrialized neighborhood. Authorities said they have yet to determine what caused the fire.