Money would make up for budget shortfall 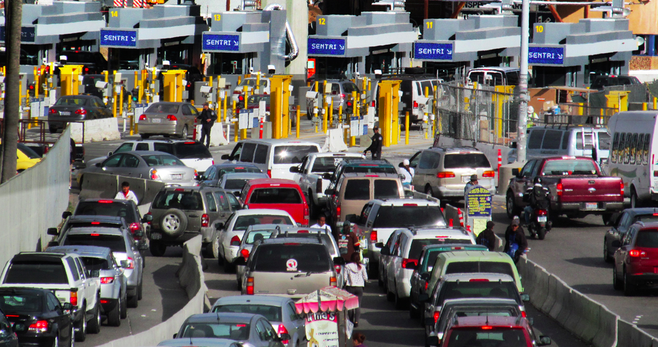 A translation of a front-page headline on Baja’s daily El Mexicano on Tuesday, April 23, reads, "They Might Charge to Cross to the U.S.” beginning in 2014. The story was about the U.S. Department of Homeland Security approving a study to determine the viability of an “entry fee” to border-crossers who commute between the U.S. and Mexico.

The plan, according to the story, is to study the feasibility of such a surcharge and the effects on border traffic and revenues received. The plan, if approved by Congress, would start in 2014.

According to the article, the tariff is being considered partially because of the proposed reduction of border-protection staff under mandatory congressional budget cuts (i.e., the so-called sequester agreements). Although the main concern for locals would be the San Ysidro and Otay crossings, the plan calls for the fee to be collected all along the Mexican and Canadian borders.

Currently there are toll charges for international border-crossings in Texas, predicated on the use of toll bridges that cross the Rio Grande (“Rio Bravo,” as it is called in Mexico). The current proposal calls for a charge to all border-crossers whether in a vehicle or on foot. This also includes passengers in buses and trains.

Although the proposal is in an exploratory mode at this point, it has alarmed business organizations on both sides of the border. The article presented no indication of how much the fee might be.