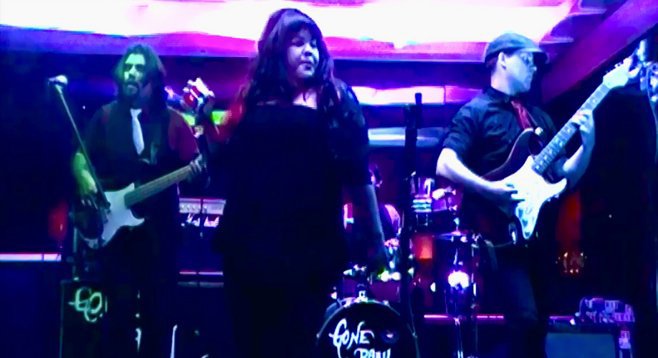 “For this particular show, the Lovebirds will perform partially as a duo, and partially with a full-band setup,” says Lovebird Lindsay White of the May 2 release party for their sophomore full-length And a One and a Two at Hillcrest’s Ruby Room. Though White and Veronica May recently ended their three-year romantic partnership (“in order to preserve [our] musical relationship”), the duo will spend May touring behind the CD. “We’ll probably have our entire third album written by the time we get back,” says White.

Over at Bar Pink in North Park on May 2, Gone Baby Gone will launch a ten-song CD that, at least on this night, comes with a “secret” bonus. “There’s a hidden live track of an Eric Burdon and the Animals cover, ‘House of the Rising Sun,’” says singer Dizzy.

Reggae jamster Mike Pinto will follow up the May 15 release party at the Belly Up for his Truthful Lies CD by touring with Hawaiian rockers Natural Vibrations and Philly’s Three Legged Fox, beginning May 16 in Long Beach and making 48 stops, including the Cali Roots Festival and the Rockin’ Roots Festival.

The second album from the fiddling folksters Lexington Field, No Man’s War, drops May 26 at the Belly Up. Produced by Jeff Berkley, the full-length features guest turns from Steve Poltz, Veronica May, and banjo-picker Dennis Caplinger.

Also: Drummer Ilan Rubin plays on the new Paramore album and has rejoined Nine Inch Nails, but he’s keeping his New Regime alive with the May 7 debut of Exhibit A. “When it came time for a third release, I had enough material for almost two full-lengths,” says Rubin. “But, unlike my first two albums, these songs weren't written with a definitive vision in mind. I realized that this broader spectrum of ideas was an exciting thing. I could release the music as a series of EPs. I call them 'Exhibits,' a collection that I can and will constantly be adding to.”