Lakeside fires a harbinger of a dry summer to come 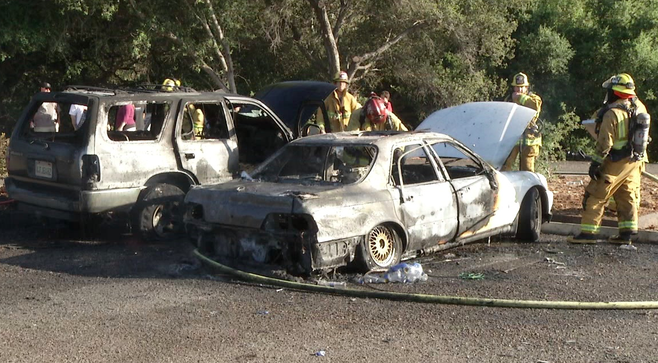 East County residents should once again prepare for a long, dry fire season. Over the past week, firefighters responded to at least three fires in Lakeside.

Saturday afternoon, April 20, a brush fire near the Blossom Valley Little League field forced players and their families to evacuate the ball field as firefighters extinguished the fire off Blossom Valley Road.

A couple of hours later, firefighters responded to two burning vehicles parked at the Flinn Springs County Park. The fire was put out before it could reach any of the nearby vegetation.

On Monday afternoon, April 22, a brush fire broke out east of El Monte County Park. Helicopters made water drops as ground crews fought the fire on the ground. Both brush fires were contained to about an acre because Cal Fire air-tankers responded quickly.

In a press release dated April 15, Cal Fire stated that it had increased staffing for fire season in San Diego County. Most seasonal fire stations and water-dropping helicopters will now be manned around the clock effective April 15, and air-tankers will be staffed effective April 22.