Orange as the color of hot 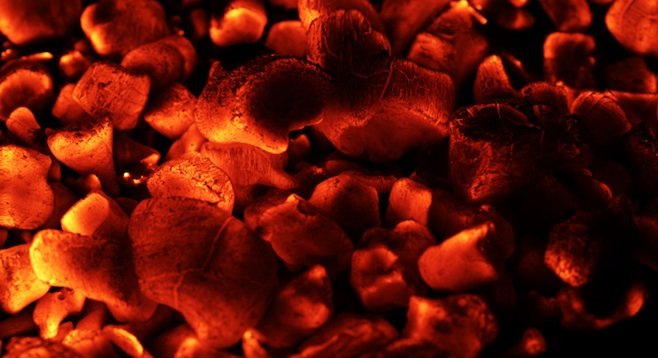 I noticed that the cherry on my cigarette, the coals in my BBQ, and the element in my fish-tank heater all glow the same shade of orange. I believe this isn’t a coincidence. Could you please explain why this is so?

It’s no coincidence, it’s incandescence! The same principle that makes lightbulbs shine is at work in the smoldering cherry of a cigarette. It’s an effect of black body radiation, which involves no small amount of physics, but I am pretty sure I can explain it easily. When materials are heated uniformly, they emit radiation at predictable wavelengths based on how hot they are. A portion of that radiation is visible light, which is why the coals in the fire glow, but most of it is infrared radiation and heat, which is why they’ll barbecue your burgers and brats so well. The dull, orange color of cigarette cherries and coals is at the very bottom of the spectrum — just above the infrared — that corresponds to temperatures around 700–1200C. As temperatures rise, the corresponding colors brighten all the way to a brilliant blue that’s nearly ultraviolet. You’ll never see that shade in a coal, however, since that would be twice the temperature of the sun’s surface and possibly kill you if it was in your barbecue pit.