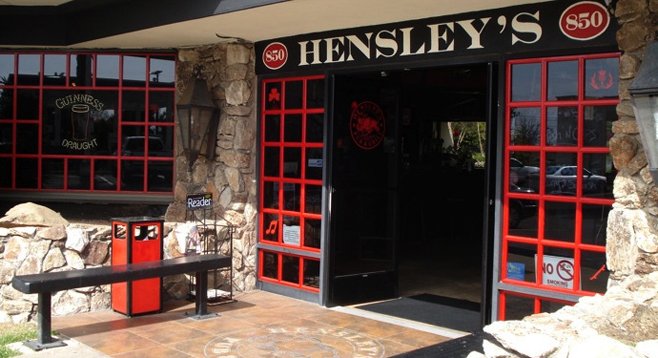 Another San Diego venue has dropped live music. The 200-capacity Carlsbad restaurant/club Flying Elephant, which flourished for almost four years under the ownership of Flogging Molly accordion player Matt Hensley, has closed. After a remodel, the building at Tamarack Avenue and I-5 will reopen as a British pub–style restaurant. New owner Ben Sanchez says the Stag and Lion Pub and Grille may have an occasional Irish musician or two, “but no bands.”

The venue started hosting bands 30 years ago. “I was in the first band to play there,” says drummer Dan Stewart, who used to play in Carlsbad bands Jack and the Rippers and the Sarcastics. “It was called Fannie’s back then.”

After morphing into Squid Joe’s, it presented local bands as well as such diverse headliners as Quino, Agent Orange, and U.S. Bombs. Hensley, who lives near the restaurant, took it over six years ago. He remodeled and reopened it as Hensley’s Flying Elephant (named after Hensley’s Chicago-based scooter club). Hensley would play on one of his two stages, and he would bring in Exene (Cervenka of L.A. punk band X), members of the Pogues, and other local rockabilly, punk, and country bands.

Hensley found it was too difficult to run a venue and be on the road with his band.

“Let’s just say I’m very happy to not be the owner of a bar anymore,” Hensley says about his four years of ownership.

For the past two years, the Flying Elephant has hosted San Diego bands such as Nihilist, Shake Before Us, and the Paragraphs. The last band to play the Flying Elephant on April 5 was, appropriately enough, Hills Like Elephants. Less Than Jake was supposed to play the following night, but that show was canceled because the new owner had taken over the establishment sooner than expected.

Stewart thinks locals will miss the Flying Elephant because of its location. “It’s on Tamarack, and Tamarack is for the locals, while downtown Carlsbad is for the tourists. This place is not part of the club crawl. They always had their own people who stayed there for the night. Plus, it’s right next to the freeway.”

the food at the new place is great.

C'est la vie, Flying Elephant! I remember going there with my friend and his parents during the height of its reign to grab a bite and hear some bomb tunes from the likes of David Lally, Tim Foley, Patric Petrie and even Matt Hensley himself! It was always fun to spot the pub while heading down the 5, which is how I first noticed it was gone!! Needless to say, the note about "Stag and Lion" not supporting bands is a bit disappointing. I don't think I'll be checking it out anytime soon.