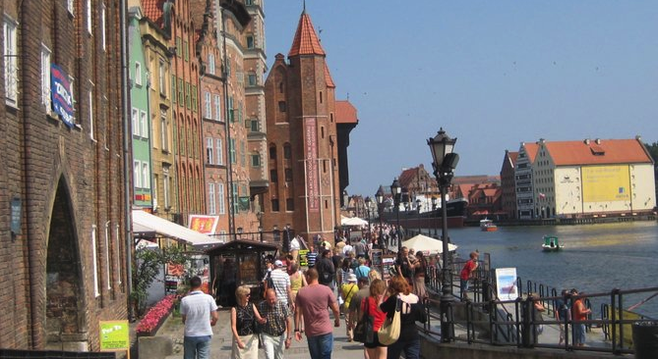 A scenic train ride landed us in Gdańsk, at the edge of the Baltic Sea.

Our apartment is 60M2. It's basically a two-bedroom apartment with a large living room that includes a third-floor balcony. I figure we could fit at least four hotel rooms in this space. It's in Old Town (no elevator), facing a one-block park with a view of the cathedral and royal chapel. Cathedral bells are chiming 8 o’clock. 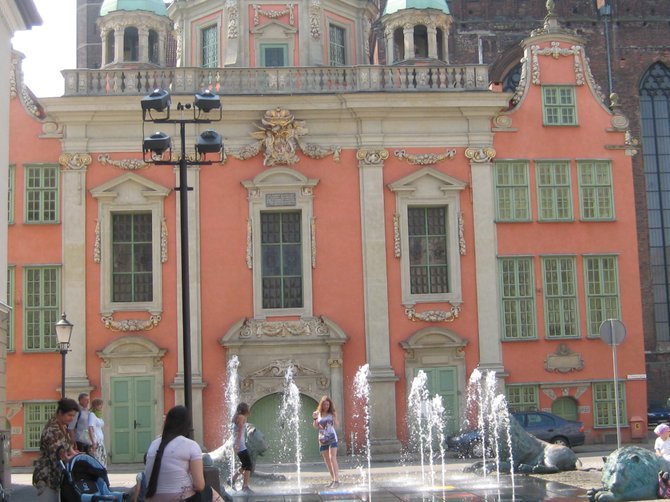 The Old Town in Gdańsk is much larger that either Krakow or Warsaw, and it adjoins the bay. There is a statue of Triton right in the middle of it. (Neptune, actually, not the UCSD mascot.) There's a boat landing with cruises out on the Baltic Sea to ports north, including Sopot and Hel.

I think we will catch a tram to Gdynia tomorrow instead. It’s farther than Sopot, but the tram is much faster, and it looks like Gdynia has a nice beach. Hel is much less crowded (obviously not the same as Hell), but it is much farther away, so it takes much longer to get there. Please feel free to read between any of these lines, and to ad lib as you wish. 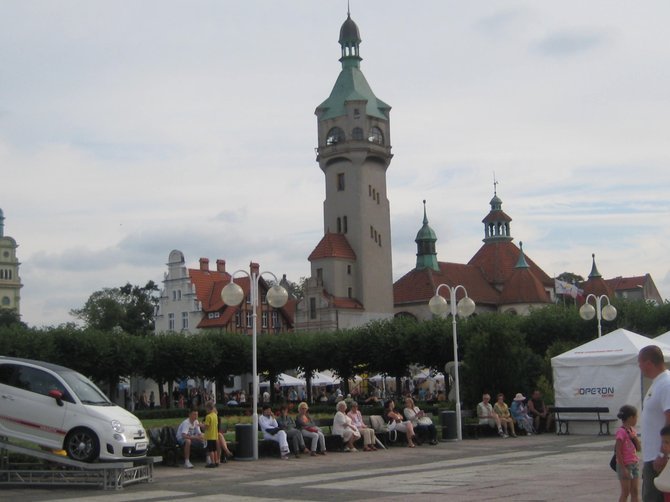 The town of Sopot.

Before leaving Gdańsk, we went on a boat ride to Westerplatte, spending an hour looking at their park and docks before returning through a heavy rain. Only those with umbrellas rode on top; the rest of us huddled below to try to stay dry. We then traveled by tram to Gdynia.

After lunch, we walked along the docks and ships and returned to the tram, getting off at a small station at Sopot. We descended a long stairway through the woods down to the beach, took off our shoes, and walked into the Baltic Sea. Cool, but not cold.

We walked two kilometers down the beach with our toes in the water until we reached the Sopot pier.

At a restaurant next to the pier, Halina just had to snack on some sledge (pickled herring). Then we walked up a pedestrian-only street lined with cafes, shops, galleries and street performers until finding the tram.

We had a smooth ride in a small twin-prop plane from Gdańsk to Wrocław (pronounced Vrosuaf). Another nice apartment at the top of 40 steps, two blocks from the main square. The square has a huge old church and colorful buildings, including a four-story bookstore (which didn’t have the dictionary with pronunciation of Polish words that I needed; makes sense since the Polish customers are almost always trying to learn English.)

Wrocław also includes restaurants and cafes, a large playground area contained in a very large sandbox, and gnomes. I previously wrote about the Orange Alternative, a movement started by Waldemar Fydrych, affiliated with Wrocław University. Here's where it all started.

After Communist rule ended, the city still remembered the gnomes as an important symbol. In 2001, a gnome statuette was installed at a street corner to celebrate the history of the Orange Alternative. Many others followed, commissioned by the city council, the university and local businesses. Today, there are 180 statuettes in public places all over the city. One's on a tram; another is on a boat. They're on sidewalks, windowsills, fountains, bridges, building entrances, etc. I saw 12 of them – the ones I saw appeared to be made of brass.

Needless to say, there are many gnome souvenirs available in this town.

This is another city surrounded by rivers and waterways, so we took a boat ride and went under many bridges, passed by the zoo, and saw hotels, campgrounds and other businesses, making great use of their riverside location.