Grub of the gods at 94th Aero Squadron 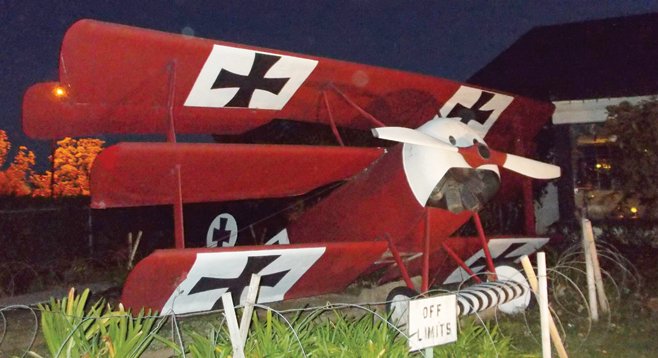 ‘There’s nothing like flying into San Diego when the marine layer rolls in,” says George. He and I are munching on crab-stuffed mushrooms. “You have to decide if you’re going to fly over it and look for a hole, or under it and hope you have enough clearance above the mountains.”

The whole flying thing is what you talk about here at the 94th Aero Squadron. George and I both came in for happy hour, but also for the atmosphere.

Me, I walked on dirt tracks for half a mile from the #120 bus’ nearest stop, at Balboa and Kearny Villa Road. No sidewalk on Balboa, natch. This is car country.

That is, until you walk into a parking lot with, at the far end, this strange, ghostly (in the dark, anyway), vine-covered stone farmhouse. The first thing you see when you get closer is, hey, hay. Bales of it in the open loft. One bale’s even swinging from a pulley over a hay wagon below. Army-green 44-gallon drums marked “Petroleum” are piled up against the wall. Horse-drawn rakes cast shadows in the floodlights. A turret looms. At the entrance, behind heaps of sandbags, a field gun points its barrel almost at you. 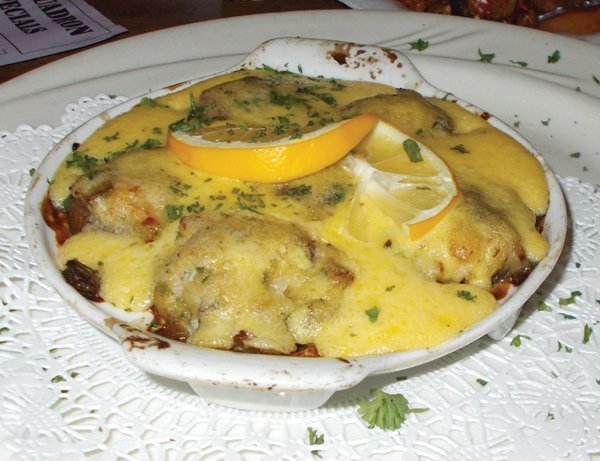 Crab-stuffed mushrooms were $4.50 during happy hour.

You’re ready to hear someone bark, “Halt! Who goes there?”

I mean, atmosphere? Wooden wall plaques that read, like, “Lt. James L. Davitt. Operations Officer” and “Officers’ Mess” hang above the doors. Outside the window, a replica of the Red Baron’s German Fokker triplane sits ready for action. On the airfield side, there are two biplane fighters, and an ambulance like the one Earnest Hemingway drove in A Farewell to Arms. And, oh yeah, a duck pond. Actual ducks splash there, part of the farmyard.

This is a replica of a French farmhouse from World War One that was requisitioned by the Yankee 94th Aero Squadron, the Hat In the Ring squadron, aka the Lafayette Escadrille, in 1918.

Sure, 94th Aero Squadron is one of a small restaurant chain, with others next to airfields in Colorado and Florida, but it’s also a great way to create a usable tribute museum. They’ve really got it right.

With this happy hour I’ve heard about, I’m hoping they’ve got it right in other ways.

Twenty minutes later, George McBride and I find ourselves sharing a corner at the bar (also “protected” by overhead piles of sandbags). Turns out, George is 86 years old. Was flying till — wow — two years ago. “That was in a plane I built myself,” he says. “Back then, pilots used to fly in here from all over for Sunday brunch.”

When I first sat up to the bar, George was eating a mess of corn chips, dipping them into a kind of stew. 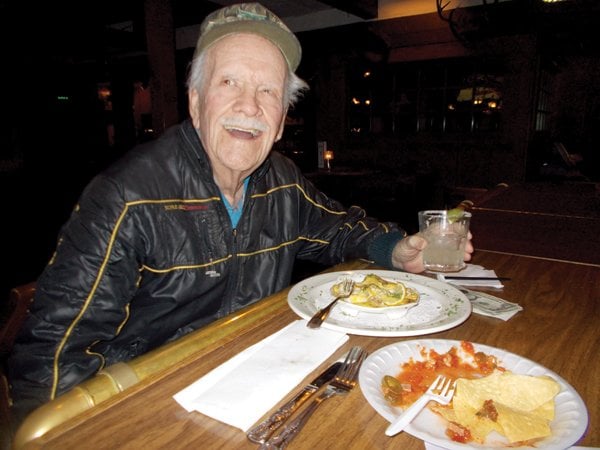 Until he hung up his wings two years ago, George McBride, 86, flew a plane he built himself.

So I order a beer (happy-hour price: $2!), then tootle off around the corner, to where you can look out over the “farm” garden to Montgomery Field, and the lights of planes gliding in. They say that if you’re at the right table, the restaurant will supply earphones where you can hear conversations between the tower and the pilots. Cool.

I look at this array of food set out on white linen tablecloths. First is the stew, steaming away. I see black olives, ham chunks, sausage, sliced jalapeños, tomatoes…smells sausagey, gumboish, delicious. At the other end of the table, a pile of corn chips look like they’re being nuked under a red heater-lamp. In between, fresh carrot sticks in a bath of ice cubes sit beside a bucket of cheese chunks of different colors. Plus, buckets of red salsa and ranch dressing.

I load up. Lots of stew, plenty of chips, carrots, and cheese. “They change the items every day,” says George. “Some nights, it’s lasagna. Others, it’s quesadillas, veggie plates. Can’t beat it.” 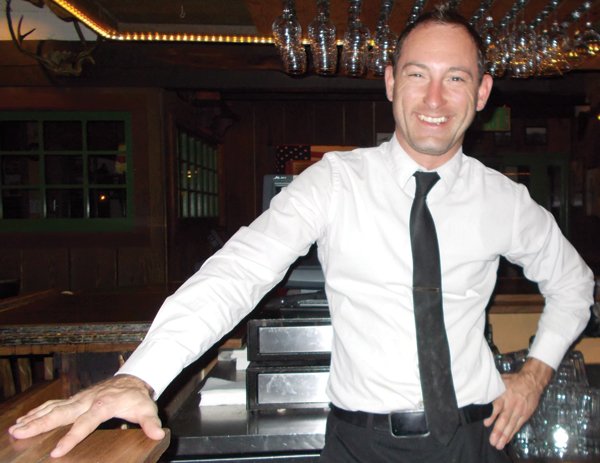 “The lasagna here is the best,” says Paul the barman. “We also have popcorn popping all the time.”

“The lasagna here is the best,” says Paul the barman. “We also have popcorn popping all the time.”

So, yeah, the beer, the cheer, the atmosphere. Hard to beat. Plus free vittles! Except, I can’t help looking at George, chomping on those crab-stuffed mushrooms like they’re the grub of the gods. What makes them look so luscious is the hollandaise sauce and garlic butter on top.

“Have some yourself,” says George. Guess he’s getting sick of me following his fork up and down. “They’re half price right now.”

I decide to get the crab-stuffed mushrooms, and, man, I’m glad I did. They are totally, oozily delicious, drowned in hollandaise, with two lemon slices to squeeze a little sharpness over them.

By now, George is onto his second margarita ($3.50 at happy hour), and I just got my second Bud Light. I hate to leave. But buses get rare this time of night.

I keep thinking: I could’ve gotten out of here for just $2 for a beer plus tax, and still had a full belly with all that free stew. This is insanely good.

Only thing better? To leave by the garden gate, hop in your own plane, and take off back to Vegas. Probably take the same amount of time as the bus to get me home.

How this old theme restaurant stays in business all these years, I never know. But I'm glad it has. The last time I was there, the food was excellent. Now that I know about the happy hour, it worth the drive back.

Hey Ken: They keep the place so much better than some places you see with a few artifacts but, like, half-hearted, just a gimmick. I just love the atmosphere. Specially the ducks. Man, how I'd love to have my own plane and fly in for Sunday brunch. Meanwhile how can you beat the HH buffet, free?