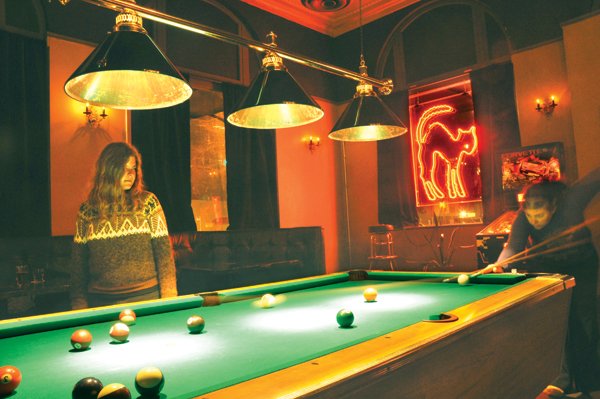 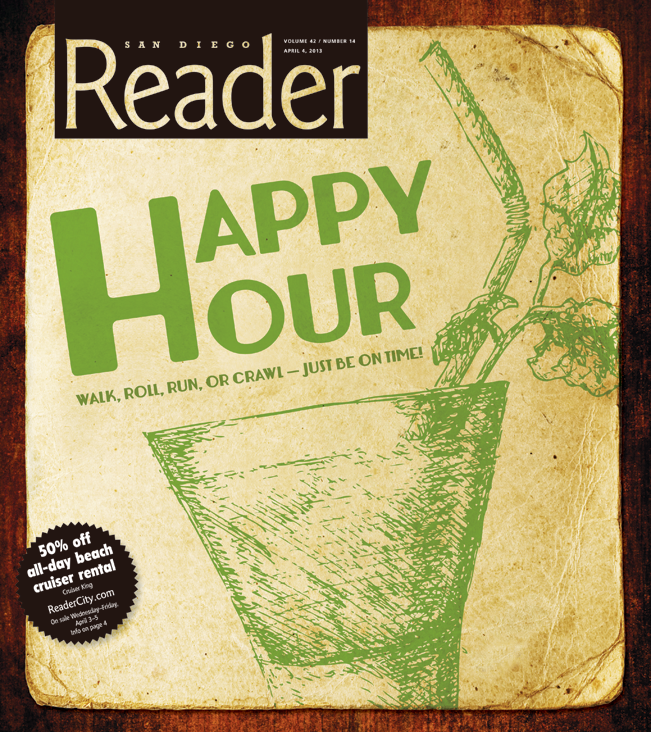 Happy Hour: that transcendental space between drinking too early and drinking too much. We all know what it’s like rushing out of work early to catch discount suds at the local dive. Some of us do it daily. But I’m not here to tell you about just any old happy hour. None of that dollar-off Bud Lite or Coronita nonsense. Take my hand, thirsty one, as we embark upon a journey through downtempo tea time, tranny-oke, Tijuana stormtroopers, line dancing, entire pitchers of hard liquor, and into the great beyond. Close your eyes. Make a wish.

It was a sad day for uptown electronic music fans — not to mention inebriate chess aficionados ­— when Kadan closed its Czech castle doors last August to make way for bougie concept eatery Soda & Swine. Chris Heaney’s new venture, The Rook, continues the tradition of medieval board games and weaponry without, for better or worse, Kadan’s signature Eastern European oubliette ambiance. Sample organic tea from local importers The Whole Leaf at the monthly Experimental Tea Sessions (6–8 p.m., beers start at $2) to a soundtrack of ambient and downtempo music from Brokenbeat DJs WalkNasty and Her Majesty.

This friendly rock-and-roll joint gets what happy hour is all about. Which is to say, pints of choice giggle water including G’Knight Imperial Red, Arrogant Bastard, and Black Market Hefeweizen at $3 a pop (4–7 daily; closed Sundays), plus $2 Jack shots with any beer, any time, and $3 wells all day long. Want more? Take $2 you-call-its from 9–11 every Tuesday. In addition to monthly art shows, Go hosts cult movie Monday’s on the back patio, local music every Thursday with KPRI host Cathyrn Beeks, live bands on Fridays, and DJ dance parties on Saturdays.

Famous for their surly, transgender karaoke starlets, Redwing is home to one of uptown’s finest drinking patios. Their specials are many, but highlights include $3 appetizers/wells/domestic bottles, $4 wings, and $5 burger/fries Monday through Friday (4–7 p.m.; all day Wednesdays); $.25 wings from 5 to 10 Mondays; dollar tacos from 5–10 and $3 Cuervo margaritas from 6 to close on Tuesdays; $3.50 tall boys Thursdays from 6 to 8 followed by trivia; $1.50 domestic drafts and $3 shot-of-the-day ’til 6 on Fridays; and $1 beers and $6 burger/beer from 2–6 Sundays.

Black Cat Bar is an endeavor of former Turf Club bartender Matt Parker, a self-proclaimed Halloween and Disney enthusiast whose penchant for the macabre led him to model the old Bank of America–cum-dive manor after the Happiest Place on Earth’s haunted mansion. Avoid crossing paths with the bar’s resident black cat, Behemuth, while boozing in the Addam’s Family’s living room to a jukebox soundtrack of eclectic oddities including ESG, Amon Düül II, and Os Mutantes. The spirits come out Monday through Friday, 5–7 p.m., when wells are $3.50 and Matt’s fetid martini goes for a five-spot.

Happy hour: ‘Til late most days

If swarms of sorority brats and the occasional Brodo D. Baggins don’t bother you, this off-campus Irish pub is home to some remarkable food and drink specials: half-off cheesesteaks/pitchers ’til 10 Mondays, $1.50 tacos and $3 we-call-its ’til 11 Tuesdays, $.40 wings and $3 drafts Wednesdays, $1 sliders and $5 mini-pitchers ‘til midnight Thursdays, $5 burger/beer Fridays, $3 wells/tallboys ’til 11 Saturdays, and $.50 wings and $5 burger/beer Sundays. Effin’s 48 taps may leave suds snobs unmoved, but, as a Danny Jansen truism on the wall reads, “The best beer in the world is the open bottle in your hand.”

A breath of fresh air for the debaucherous Neverland of PB, Cali Kebab caters to more refined sensibilities with an ocean view from their 1000-square-foot al fresco patio. Turn up the happy on weekdays from 3–6, when sides and most of the 23 taps are half-off, including selections from Societe, AleSmith, Ballast Point, and the in-house brewery, Amplified Ale Works. Specializing in Döner Kebabs and locally-sourced salads, this beachfront brew house is garnering prominence for their farm-to-table Sunday beer & bacon brunch (10–2, $20) with rosemary potatoes, a smoked-cheddar scramble, french-toast crostini, and four pairings.

Pal Joey’s cobblestone façade can be deceiving. Judging from the outside, you might think it’s just another strip-mall cesspool bumping elbows with a Foster’s Freeze, and, before it changed hands and got a makeover about five years ago, you’d be right. Now, Pal Joey’s, which may or may not be named after the 1957 love-triangle flick starring Frank Sinatra, Kim Novak, and Rita Hayworth, feels almost regal. Celebrity portraits peer out over the bar’s fixture post-prime clientele, who show up in droves for $3.50 personal pitchers (W–F, 4:30–6:30), karaoke, live bands, comedy, trivia, and goldfish races. That’s a real thing.

Pizza and beer. They go together like North Korea and hollow threats. But, unlike the late Dear Leader’s bellicose rhetoric, Da Boyz in East County is, in fact, da bomb. And here’s why. Sunday through Thursday (2-6 and 9-close), select wines are $3/glass and a pint of brew goes for $2. Anything but a bluff, taps spit the usual domestics in addition to Red Trolley, Tower 10 IPA, and Da Boyz Pale Ale (it’s Redhook), all of which run at a non-menacing $1.50 all day on Tuesdays. Happy-time cocktails are $5, Jack/Fireball shots are $3, and appetizers are $4. 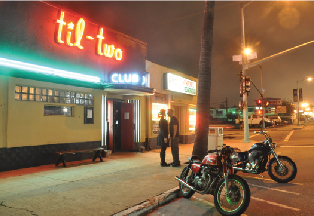 Tower Bar owner Mick Rossler picked up this location (formerly the Beauty Bar) in 2010, restoring it as close as possible to the likeness of the original Til-Two Club circa 1948. Now it’s a friendly neighborhood hangout that comes alive many nights with Kim Gordon comedy, Beats Kitchen, and live rock and punk shows. Take advantage of the mellower evening, when you can chat with barmates over $3 well and pints including Guinness, Lagunitas IPA, Stone Pale Ale, and Green Flash IPA (4–7 daily). Cringing at inflated prices, un-happy drafts go for $4 and specialty cocktails start at $3.50.

Someone needs to give this do-ask-do-tell tropical hooch hut an award. A fierce contender for Happiest Hour Ever, the Hole completely redefines drink specials. Like, say, $2 wells, and $5 32-ounce well pitchers. Better yet are the anytime specials: mini pitchers of Long Island Iced Tea for $12, Yellowtail for $7, Coors and a Jäger shot for $7, and $2 well shots with beer purchase.

Not just a kick-ass neighborhood venue that books booming electronic nights, local diamonds-in-the-rough, burlesque shows, and just about everything in between, The Ruby Room is also a firm believer in imaginative drink specials. Their Rock N Roll happy hour runs Monday through Thursday (5–8 p.m.) with live ’60s, surf, and garage bands to accompany $3 wells, $5 calls, and 14 taps of local and select beers for $1 off.

Combining organic burgers with artisan barley pops and New Zealand-inspired affability, Raglan recently celebrated a year in San Diego’s grooviest beach town. The bar boasts 24 taps and a beer engine for casks with drafts running from $3 to $7. Select suds are half-off during happy hour (Monday–Friday, 3–6; weekends, 10–3) along with munchies, house wines (many of which have Kiwi origins), and sangria. Monday: $6 flights and $10 munchie feasts, 6 to close. “Taco-less” Tuesday: $2.50 sliders and $12.50 pitchers, 6 to close. “Thurstober”: $5 steins and $5 pretzels, 6 to close. Sunday: half off everything, 8 to close.

Happy hour: All day, every day

Along the chalkboard walls of this Zona Centro pizzeria you’ll find sketches from urban artist Glow among handwritten poems and an Imperial stormtrooper pointing the way to the baños. Though many can’t imagine paying more than a buck a beer in Tijuana, the truth is that this is one of the only places in town where the fabled dollar draft can be found, and all day long. Featured tequila shots run around $3 and go surprisingly well with Le Galleria’s thin crust pizzas. Ask about their Wednesday classes, where you can toss, top, and cook your own New York–style pie.

This well-worn country dance house in Mission Valley offers some boot-stomping drink specials. Free dance lessons kick off daily (closed Mondays) at 6:30 with classics such as the Slappin’ Leather Waltz, the Barn Dance, and the Redneck Angel. Tuesday: karaoke and $3 drinks all night. Wednesday: 15-year strong KSON night (crowded) with $2.50 drinks. Thursday: Steak, baked potato, and a beer for $5.95. Happy drinks 5 ’til 9. Friday: $3.50 Dos Equis and $5 Fireballs all night. And the biggie, Sunday: $2 all drinks, all night. Mind the dress code, city slicker.

More from the Happy Hour issue: Not just drinking on the mind | Silver linings of a down economy