Window into the ancient world. 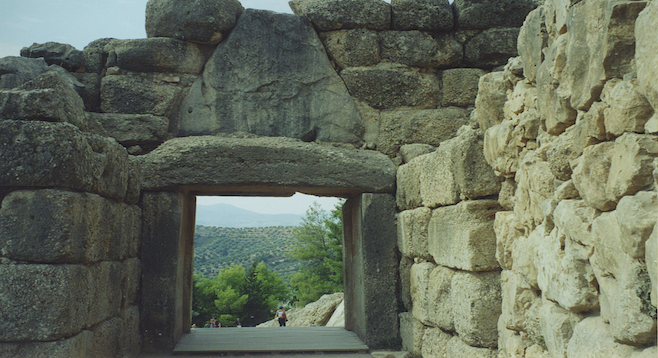 About 1.5 hours outside Athens, Mycenae is one of the essential stops for any visitor to Greece with an interest in ancient history. Arriving here, you're awed not just by the site and the ruins, but by the palpable sense of history in the eerie silence. 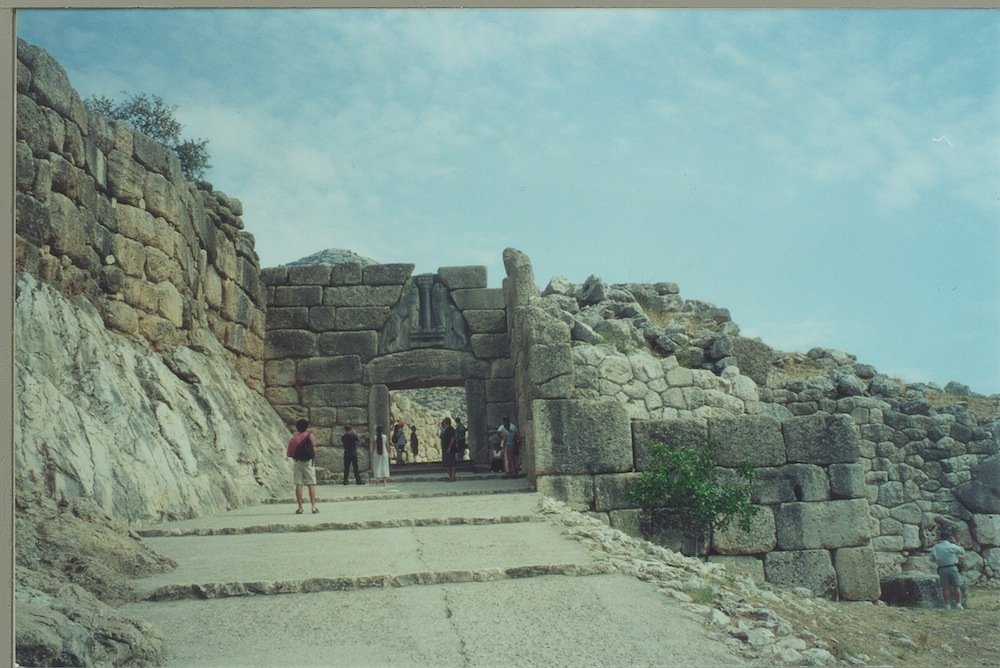 Soaking in the history at Lion Gate.

Perhaps these eternal memories are encased in the huge stones that greet visitors at the Lion Gate. I stood in awe looking up at the carvings of twin lions that had stood at this spot for over 3,000 years. It’s the oldest known existing monumental structure in Europe and nearly worth the visit in itself.

After entering the Lion Gate, you might notice that what remains at Mycenae are mainly walls and tombs. The palace has long been destroyed, and there are no sculptures. So it's up to the visitor to envision the thriving civilization that existed here. If you've read the Iliad, you may be able to imagine the ancient Mycenaeans defending this spot from invaders.

It goes without saying that a visit here, as well as to Delphi, is greatly enhanced by some knowledge of the history behind the spot. A little advanced research is recommended.

It's here at Mycenae you might wish you'd been staring aimlessly out the window just a bit less during that undergraduate world history or world lit course. The more deeply you understand its history and significance, the more extraordinary and memorable your visit will be. Without this knowledge of the stories surrounding the site, you might want to hire a guide to bring the site alive.

What happened here has wafted through the imagination of Western Europe for several millennia. Mycenaean culture thrived from about 1600 B.C. to 1100 B.C. during the Bronze Age. After the fall of the Minoans, it became the dominant civilization in Greece. Mycenae was a powerful and influential center of power in the ancient world, and its legendary status was enhanced by the poems of Homer – particularly the Iliad and Odyssey. 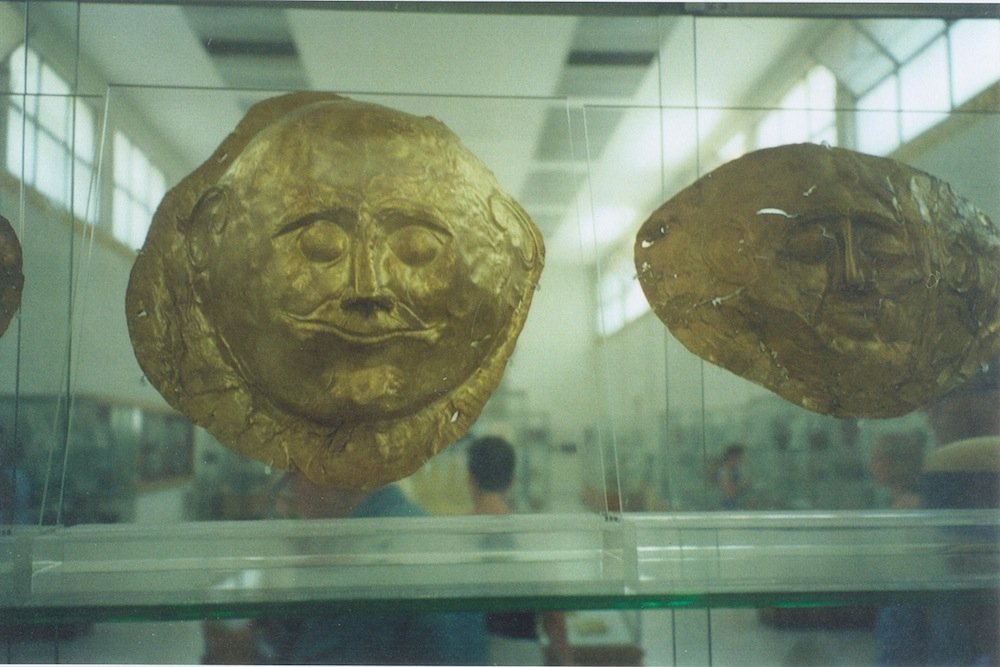 After entering the Lion Gate, you will come to Grave Circle A. Six royal grave shafts are here. This is where the archeologist Heinrich Schliemann, the discoverer of ancient Troy, dug up an exquisite gold mask. Upon seeing the mask, Schliemann exclaimed, “I have gazed upon the face of Agamemnon.” Grave Circle A, however, dates to 1600 B.C., predating Agamemnon’s death by about 200 years. The famous mask (left) is now on display at the National Archaeological Museum in Athens.

Continue from Grave Circle A up the hill to what remains of the fortified palace. Don’t expect any spectacular buildings, as little remains other than stones. But pause to reflect upon the events that happened here.

Certainly there was no shortage of dramas to fill the tabloids, had they existed at that time. The House of Atreus was especially fraught with gruesome events, including a meal of children served from one brother to another and the stabbing death of Clytemnestra by her son Orestes as revenge for murdering his father. Orestes’s father? The aforementioned Agamemnon. If only those walls could talk!

It's a bit of a climb up the rocky hill to the top, but well worth it for the spectacular 360-degree view of the Mediterranean and surrounding countryside. Take in the tree-covered terraces and orange and olive groves. There are also vineyards nearby that you can visit. 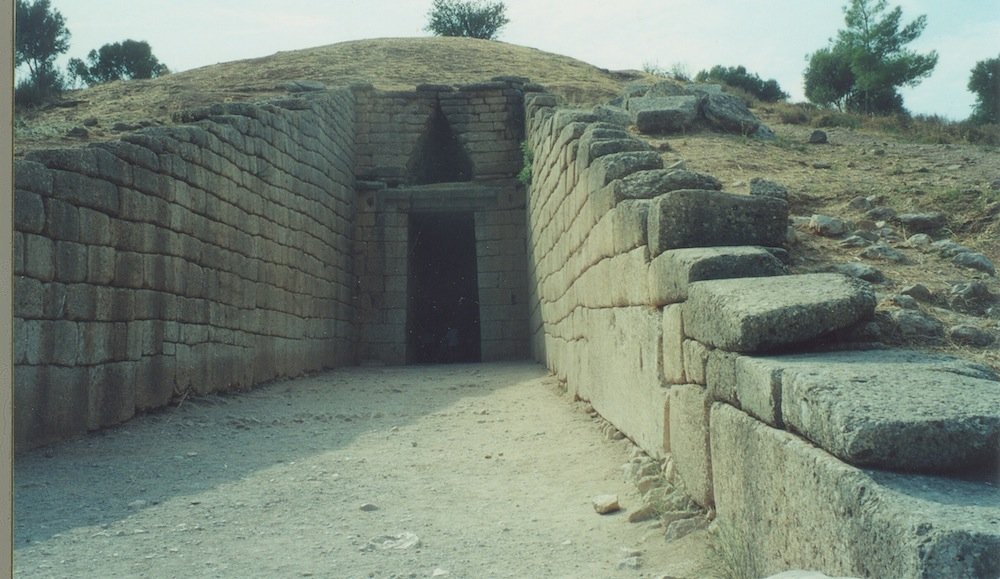 The Treasury of Atreus (left), a tholos tomb, is about a five-minute walk down the road from the main site. This should not be missed. The sheer size of the tomb, built around 1250 B.C., is impressive, and it can provide relief from the sun on a hot summer day. The tomb was pillaged in ancient times, but its magnificence remains.

The nearby small museum is well worth a stop, perhaps even before you visit the site, to fill in the gaps of your historical knowledge. It contains many historical artifacts. Don’t miss the frescoes of the two priestesses and the intricately painted earthenware. Many other artifacts taken from the site can be viewed at the National Archaeological Museum.

It’s wise to bring your own water; bottled water is somewhat pricey here and you'll need it on a hot day. I recommend coming early in the morning or late afternoon – you will experience not only cooler weather but an ambiance more conducive to reflection over the site’s layers of history.

As you’re taking a few cold sips under the Mediterranean sun, this thought may emerge: what will remain from our civilization 3,000 years from now for future visitors to marvel at?