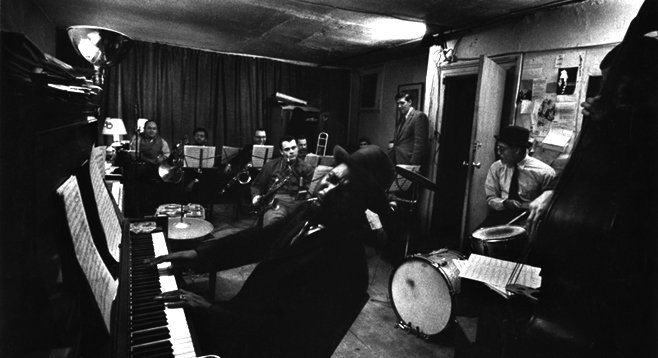 I’ve been listening to the jazz pianist Dave McKenna, who died in 2008. He was a lyrical swing artist with some of Bill Evans’s melancholy, though he wasn’t as inventive as Evans and didn’t have the emotional range, but at his best his playing had a loping, endearing sweetness. McKenna liked to joke that he wasn’t really a jazz stylist, that he was at heart a “saloon piano player.” He meant, I think, that he was a melodist more than an improviser, though in the early 1960s he jammed with some of the greatest improvisers of postwar jazz in a loft building at 861 Sixth Avenue, near 28th Street in Manhattan.

McKenna was a handsome, dashing man back in the day, and we know so because the best snapshot of him was taken, in 1960, by W. Eugene Smith, at that Sixth Avenue address. Smith was one of the most famous photographers in America, but in the 1950s his career had taken a hard right. Born in Wichita in 1918, by the 1940s he was working for Newsweek and had became a combat photographer during WWII; badly wounded in the Pacific theater, he lived with chronic pain (and an addiction to meds) until his death in 1978. In the postwar period, his images featured regularly and prominently in Life magazine, but in 1955, after years of fiery conflicts with his employer, he quit his Life job and threw himself into a photo-essay on Pittsburgh, a three-week freelance assignment that dragged on — Smith was famously obsessive — for four years and remained unfinished. In 1957 he left his wife and four kids and a fine house in Croton-on-Hudson and moved into the derelict, squalid building on Sixth Avenue to wrap up, he hoped, the Pittsburgh project. The five-story building was by every report a rat-hole but was located on what must have been New York’s most fragrant block — the wholesale flower district.

The lofts were being used as jamming and rehearsal rooms (and, illegally, as crash pads) by musicians who shaped hard-bop and free jazz. Miles, Monk, Don Cherry, Ornette Coleman, Zoot Simms, Albert Ayler, Jimmy Giuffre, Sonny Rollins, Lee Konitz, Lee Morgan, and many others famous and not would show up sometime after 11 p.m. and play and play and play. Smith was a cultural omnivore, and music was one of his favorite foods. From 1957 to 1965, while covering his walls with an expansive mess of prints from his Pittsburgh project, he photographed musicians who frequented the joint, photographed, too, from his loft windows, the neighborhood downstairs, its citizens and seasons. He exposed during those years 1447 rolls of film and made 40,000 images. He also wired and ran mics through the music rooms, effectively turning the entire building into a recording studio. His several reel-to-reel machines picked up, in addition to music and random conversation, stuff coming over the radio. A tape from 1960 includes: game one of the World Series between the Pirates and Yankees; Faulkner reading from Light in August; Oral Roberts healing with hallelujahs. In the end, he filled 1740 reels with 4000 hours of material. 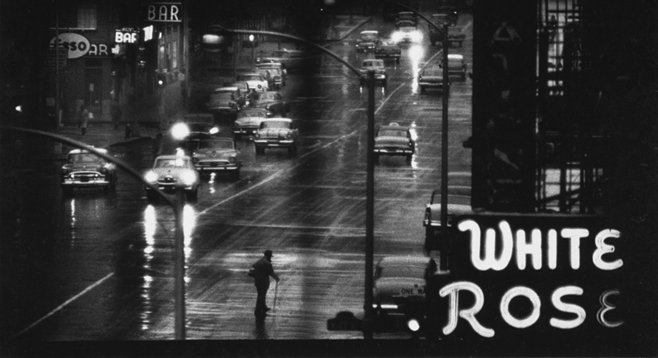 Out of this shambling, stunning, hilarious archive came a terrific traveling exhibition that has finally landed at the Museum of Photographic Arts. The Jazz Loft Project features photographs of musicians at play and street views from Smith’s loft. The music pictures aren’t high-finish images — they’re visual equivalents of improvisation, pieces of reality found by Smith while he practiced on his own instrument. A frequent subject is Hall Overton, one of the most esteemed arrangers of the day and Monk’s collaborator on three performances Monk and his band rehearsed in the loft: Town Hall in 1959, Lincoln Center in 1963, and Carnegie Hall in 1964. (If you haven’t heard the Town Hall concert, jump on it.) In one photograph we see Overton in a grubby room seated at one of two pianos: the dilapidated uprights stand side by side, as if waiting for movers. A lonesome hi-hat, minus its kit, stands on the floor next to a tape recorder, the two reels rhyming with the twin pianos. A clamp lamp throws dirty light onto a crusty ceiling. The room is like a crummy furnace that produces gold ingots. There was a painter in the building, too, David X. Young, and in one shot of the bassist Jimmy Rainey, a trombone lies on the floor like something forgotten, and there are runny paintings on the wall. It’s virtually a still life of the tools and inchoate forms from which shapely feeling emerges. Smith caught the tremulous acuity of light as it struck surfaces like the lacquer on that trombone, the brass of that hi-hat.

The most compelling images in the show, however, are those that Smith took from his loft studio. He assumed formal constraints. His windows were view-finders within his view-finder. Virtually all the pictures look down to or across Sixth Avenue. He sometimes used a broken windowpane as a framing device, so that certain street scenes look carved up. All the pictures are literally eavesdroppers. We feel we’re watching people who don’t know they’re being watched. Smith was an extremely difficult, self-absorbed person, but his pictures teem with generosity and inclusiveness for the otherness of strangers. A man bundled against an April snowstorm holds a bag of flowers that look like brave beacons of springtime. A woman’s leg stepping from a car is a Mad Men slice of time without that show’s annoying, meticulous perfectionism: Smith delivers the slurred completeness of a lived (and witnessed) moment, and it’s a thrill. And when you overhear snippets from the tapes, because there’s no sophisticated isolating and tracking of the voicings of instruments and their musicians, you feel like you’re in a crowd — it sounds like life.

Flower shops, Sam’s Luncheonette (whatever became of luncheonettes?), an auto accident (and its victim), cop cars, the delicate spinning-top dance of umbrellas, parade-goers carrying little flags, an earnest fellow looking through a telescope after dark — these were Smith’s unknowing subjects. Because of his vantage, the weather in the photos often looks laid on, not something blowing or falling through a scene. In his several pictures of falling snow — snow never looked so fat — the photographic paper looks flocked and deckled, as if the snow had somehow saturated it. Like most street photographers, Smith was mad for signage. The posted cigarette ads he caught on film — another Mad Men flash — seem a nearly forgotten dialect: Chesterfield, L&M, Parliament, Spud. (I know, what’s with Spud?) And that picture I mentioned of flowers in the snow (First Day of Spring) contains also a one-way sign pointing in the direction opposite the flowers.

Many of the musicians at Sixth Avenue dropped from sight, some turning up years later in small combos in resorts, others in very different lives. The bassist Jimmy Stevenson, who appears in several of Smith’s pictures, left New York in the 1960s and vanished. In 1998 the writer Sam Stephenson began archiving, editing, and selecting the recorded and photographic material Smith left: the exhibition and its informative, genial catalog are the results of his efforts. When he went in search of musicians who had been part of the loft scene, he eventually found Stevenson in 2003, who with his wife was selling homemade wind-chimes at a roadside stand in California wine country. Smith’s photographs tell us over and over that life is change and movement. The world below his window was a world at work and in motion. Firefighters, shoppers, laborers lifting manhole covers, a guy rolling two folded mattresses down the street, delivery trucks, children with their families, mounted police on patrol — so much direction! A pair of photos shows a smurfy guy in a T-shirt trying to cross Sixth Avenue. He turns this way, then that way, his body torqued as if the city’s energy were spinning and confusing him. My favorite image in the exhibition is also the classic representation of all the stories musical and streetside that Smith documented. From the loft window we look down on a woman under a dainty umbrella, a fixed sweet spot in a scene surrounded by busy foot-tracks going every which way in slushy snow. The umbrella looks like it has paused for the moment, just before the walker left behind tracks of her own. ■