Proposition 30, the ballot measure backed by Democratic Gov. Jerry Brown to raise California taxes, is getting a significant financial lift from tax-exempt foundations that were set up to benefit and perform services for the state's public universities.

According to disclosure filings posted online by the California Secretary of State, a campaign committee calling itself the "California Coalition for Higher Public Education Issues Committee - Yes on 30" has collected $102,650 since the beginning of July from an array of tax-exempt non-profits linked to state universities and community colleges, as well as money from individual donors with links to the schools and their foundations.

According to its most recently available public disclosure filing with the Internal Revenue Service, covering the 12-month period ending June 2011, the San Marcos foundation had total revenue of $13.5 million.

Its mission statement says that the corporation provides "administration and other business services" to the school, runs the book store and food services, and administers "research and training grant awards to campus faculty."

The most recently available disclosure report for the Palomar College Foundation, covering calendar year 2010, says the non-profit took in $1.76 million.

The Palomar foundation's mission statement says that "with the support of the community" the non-profit "secures supplemental funding, other resources, and provides program support for the benefit of Palomar Community College and its students."

Proposition 30, Brown's bid, is going head to head with a competing tax hike proposal, Proposition 38, backed by civil rights attorney Molly Munger and the state PTA. They tout their measure as being better for education.

But based on recent campaign filings, the governor and the state's big teachers unions, the California Teachers' Association and the California Federation of Teachers, appear to have marshaled the forces of the state university foundations behind their effort.

The Howard Jarvis Taxpayers Association, one among several groups opposed to any tax increase, has begun a radio campaign against Brown's measure, saying the Munger bid is less politically viable.

We have calls in to the Palomar College Foundation and the University Auxiliary and Research Services Corp. seeking further details about the political involvement of each.

Update: Palomar College Foundation executive director Richard Talmo got back to us by phone this afternoon and confirmed the foundation’s contribution. He added that foundation directors voted to approve the action after a report on the matter from college president Robert P. Deegan, who is an ex-officio member of the non-profit’s board.

This sort of blatant political activity by such foundations should be illegal. In fact, I'd guess that it is. But will the state attorney general prosecute it? LOL SurfPup, I hope you are right. That tax hike now would send the worst possible message to anyone contemplating moving to the state, and if it passes will have a couple hundred thousand of the wealthiest tax-paying citizens pull up stakes and leave here for good. (For the dense, that means they stop paying ANY tax to California.)

Molly Munger's Prop 38 is the way to go. A great good cause to help beleaguered public school kids in K-12 classrooms; strict spending limits (no personnel salaries); tax sunset after 12 years; community involvement in spending decisions; sponsorship by the California PTA. The measure with the most votes wins: make it Molly Munger's Prop 38.

Governor Brown has tried everything to push Munger aside, but it hasn't worked. He's drumming up support for Prop 30 , but he's saddled with union demands and a huge agenda that encompasses all of post-secondary ed whose chips are being called in, as noted here. And this doesn't account for voter unhappiness with Sacramento's recently-revealed departmental slush funds and massive capital spending plans for water diversion under the Sacramento Delta and high-speed rail from nowhere to nowhere.

tax sunset after 12 years; hahahaha...Please monaghan, you cannot be serious, do we look like we just fell off the turnip truck??? There is NO SUCH THING as a temporary tax, and never will be.

I doubt anything will be done about this illegal activity. The Dems allow corruption if it favors them.

Just as a point of reference ...

Proposition 30 also includes a hike in the state sales tax. Proposition 38 has no such increase.

QUESTION: If either Proposition 30 or 38 is passed, what affect do you think it will have on California's business climate and our high unemployment rate (bother are currently ranked 3rd worst in the nation)? 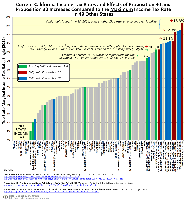 CHART: Current California Income Tax Brackets/Rates and the Proposition 30 and Proposition 38 Tax hikes Compared to the MAXIMUM Income Tax Rate in 49 Other States by SoquelCreek 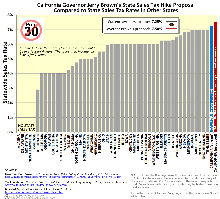 Birgeneau ($450,000) Breslauer ($306,000) like to blame the politicians, since they stopped giving them their entitled funding. The ‘charge instate students higher tuition’ skyrocketed fees by an average 14% per year from 2006 to 2011 academic years. If they had allowed fees to rise at the same rate of inflation over past 10 years they would still be in reach of middle income students. Breslauer Birgeneau increase disparities in higher education and defeat the promise of equality of opportunity.

UCB is to maximize access to the widest number of residence at a reasonable cost. Birgeneau Breslauer ‘charge Californians higher tuition’ denies middle income families the transformative value of Cal.

You have commented before about UC Berkeley, and your comments made little sense then. Perhaps this time you can explain yourself. The campus chancellor and the provost may like to see student fees hiked, BUT THEY DO NOT SET THEM. The regents do that, and all campuses pay about the same tuition and fees. Whether state residents pay more or less than now, there are things afoot to make UC less accessible. For example, they now admit larger numbers of out-of-state students than previously in order to soak them with non-resident tuition and fees. But the mission of the UC is to serve Californians, not just anyone.

Please explain why/how those two certainly-overpaid administrators are responsible for policies set by the board of regents.

Vault Combat Academy. What do you love about that? Personally, I think it's an odd name for a gym but then I realize it's not their vault. Ha! Ha!

Seriously though, I would like to know what the hell is going on in OB. Gropeings, stabbings, Jeez. It never used to be this bad. Don't know if the meth and/or crack is really messing up the area or what.

OB used to be a fun place; now it seems there are a lot of scuzbags hanging out down there and the cops are unable to unwilling to do anything about it. So, the scuz population just gets bigger and bigger.

Whatever it is, I hope this citizen patrol stuff helps and doesn't make the situation worse.