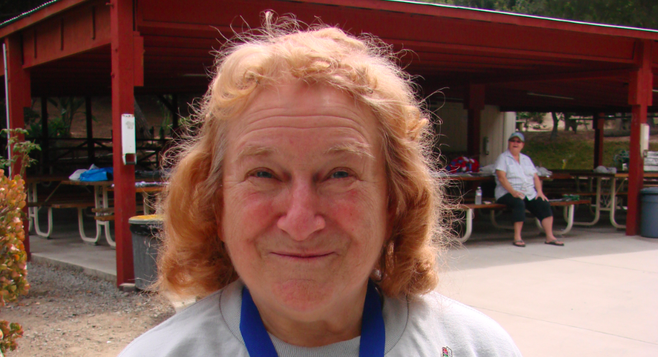 The 2012 San Diego Senior Games are now under way. Games will continue through the month of September.

On Sunday, September 9, the Chula Vista Elks Lodge hosted three tournaments: bocce ball, “cornhole,” and ladder golf. Juan, one of the bocce ball participants, was 89 years old. He was on his way to winning a gold medal for his age group.

The San Diego Senior Games Association, a nonprofit, was founded in 1988. The SDSGA is the largest in California, with participants who have qualified for state and national championship competition.

Each of Sunday’s competitors in the cornhole tournament (bean-bag tossing) was over age 70 and all had limited experience playing the game.

“Rod and Curt beat me, but it’s all friendly competition,” Lillian told me. When a point is scored, someone yells, “Cornholio!” a reference to a Beavis and Butthead character.

Another one of the participants wanted me to know about was the women’s basketball tournament scheduled for September 15 and 16 at the Balboa Park Municipal Gym: 20 teams will compete, including teams with members ranging in age from 40 to over 80.

One of San Diego’s teams is made up of members who are all in their 80s. “The Splash” team members have played and grown together since their 70s and have won national gold medals in senior games competitions.