Not just another fat guy in a diaper. 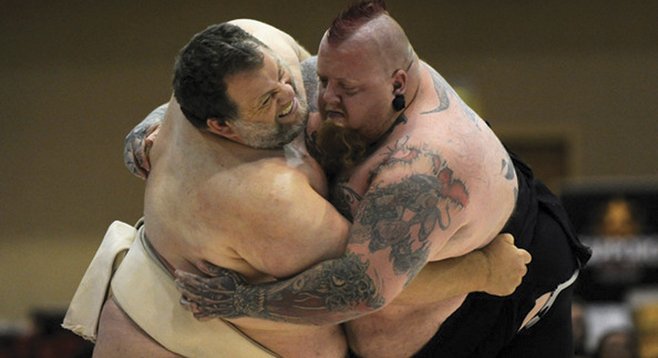 First things first. Kelly Gneiting, 42, is a sumo wrestler, born and raised in Idaho. He is the current and four-time U.S. national sumo champion.

Gneiting is six feet tall, has a waist that is five feet in circumference, weighs 420 pounds, can do a full split, and then bend forward and touch his forehead on the floor. Lest you think he’s merely a limber fat boy, he also rips out push-ups, four sets, 25 push-ups each set.

Gneiting has appeared in movies (Oceans 13 and Memoirs of a Geisha), TV shows, and been written up in newspapers and magazines worldwide. His first book, Fat Passion: Life & Lessons from a 400-lb Marathon-ing Sumo Champ, has just been published. Gneiting will be competing at the U.S. Sumo Open in L.A. on September 22 (check usasumo.com for particulars).

This column and the next are culled from interviews taken at a sumo exhibition, via telephone while Gneiting traveled through New Mexico on a train, and from his friend’s house in Gallup.

Second things second. “How did you get started?”

Gneiting says, “Back in the ’70s there was an unlimited weight class in freestyle and Greco-Roman wrestling, but they did away with that. Today, if you’re over 265 pounds you can’t be an Olympic champ. There’s no category for you.

“I knew I had ability. I tried to get down to the highest weight limit, which was 285 at the time. And then when it dropped to 265 I knew I couldn’t make it. I’m 420 pounds now. I saw sumo and thought, That’s what I need.

“When I was young, I knew someday I would do something great with this body. I didn’t know when. I’m 42 years old and plan to swim the English Channel next year; we’ve already put $500 down for the pilots. I have one more marathon to do [Gneiting has already run the L.A. Marathon twice], and that’s going to be it for marathons. I want to keep competing in sumo as long as the body holds out, and I’d love to get sponsorship and climb Mount Everest.

“When it comes to my body, it’s durable. I can be thrown, and I have been thrown, by Byamba [three-time world champion Byambajav “Byamba” Ulambayar], over and over and over again, and I pop back up. It’s one of those gifts God gave me. So, what are we supposed to do with our gifts? Well, I know I can climb [Mount Everest]. It may take a while, but once those wheels spin, they don’t stop spinning until the journey is complete.”

“We always hope it is, and we like to tell people it is, but in sumo European championships there are 400 to 500 athletes. In ours there are...40.

“The sport is growing, but it’s growing in little pockets here, little pockets there. People have to bust through a few walls before they give it a try because of, ‘Oh, I don’t want to wear a diaper. I don’t want to go out there with those fat, naked guys.’ We have to overcome that stigma. It’s a martial art and it’s 2000 years old, but for many Americans that means nothing.”

“At home, I have a wife and five kids. [Gneiting has been married 18 years, has four sons and one daughter.] My wife thinks I’m crazy 90 percent of the time, but she supports me. The kids love it. They think Dad’s the coolest thing in the world.

“I drove a Freightliner for five years hauling potatoes. Right now I work in Arizona and my wife and kids are in Idaho. I have a master’s degree in geography. I’m a statistician. I work the job and send money home. My wife lived down here for six months and hated it. And, so, we manage. I go home and see them and they get all excited, and I’m twice as excited, and then I go back to work and send money home.”

“It’s on an Indian reservation. I work for Fort Defiance Indian Hospital. I work with health statistics, download data, make sense of it, give reports, present findings, that sort of thing.

“I go from having an office and being a white guy on an Indian reservation, where I’m looked down upon, not equal to the red-skinned people there, to India, where you step off the dohyō and there are hundreds of people reaching for you like you’re Gandhi. They just want to touch you.”

Who's more, um, remarkable -- writer Patrick Daugherty or sumo champion and data base expert Kelly Gneiting? Like is that last name for real? It's almost the same backwards as forward.