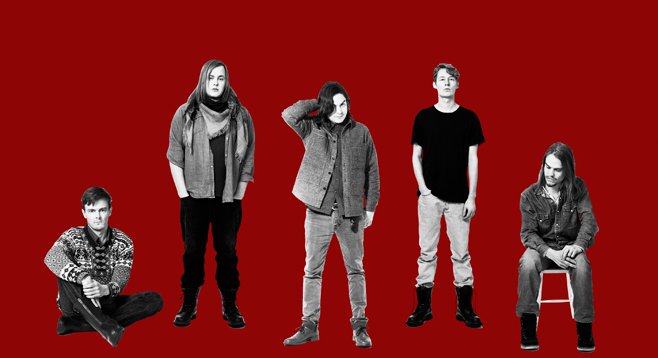 Moonface started out as a lo-fi solo project by Spencer Krug in what little time off he had from his other bands, Wolf Parade, Sunset Rubdown, and Swan Lake (among others). To show how seriously he took Moonface, one early release was titled Dreamland EP: Marimba and Shit-Drums. But Moonface’s Heartbreaking Bravery, released this spring, was named by Spin magazine as one of the best releases of the year so far. And Spin’s right.

Krug first gained widespread attention with Wolf Parade, the band he started in Montreal in 2003 with Dan Boeckner. Famously, their first show was opening for the Arcade Fire. After Wolf Parade split last year — and if reports are true, Sunset Rubdown did as well — Krug started concentrating on the unlikely Moonface.

Heartbreaking Bravery is an unlikely favorite, too. The record finds Krug collaborating with Finnish prog-rockers Siinai to create a powerful mix of moody guitar rock and distorted electronic sounds, along with Krug’s bizarre lyrics and slightly deranged delivery. It’s a dark, unsettling record whose most upbeat song has Krug repeating the line “Teary eyes and bloody lips make you look like Stevie Nicks.” The nearly eight-minute “Headed for the Door” sounds like M83 having a nightmare. The title track is a slow ballad equally reminiscent of the Twin Peaks soundtrack, side two of David Bowie’s Low, and “Purple Rain,” with Krug creepily singing, “I’m not the fox/ with bloodstained lips/ standing over the kill.” By the five-minute mark, he’s singing a wordless hook, “oh-oh-oh,” and you can imagine this playing for the last dance at the weirdest and most wonderful prom ever.