In Praise of a Gold and Silver Painted Scene 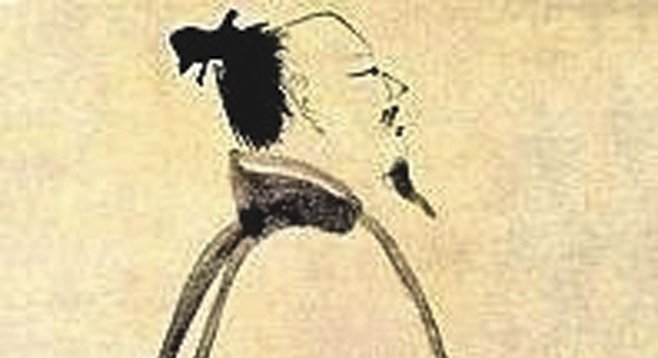 In Praise of a Gold and Silver Painted Scene of the Buddha Manifestation in the Pure Land of the West, with a Preface

Looking toward the west where the sun sinks away,

Eyes pure as the waters of the four oceans,

His body shines like a mountain of purple gold.

By diligent contemplations we can surely be reborn,

Thus the acclaim of Ultimate Joy.

The flowers of Heaven are scattered in fragrant halls.

In this painting it is all before our eyes,

And in prayer we entrust ourselves to that spiritual realm.

On the oceans of power from the merit of this,

Let divine intercession be our boat and bridge,

May as frost be swept away by the wind.

Let all think on the Buddha of Eternal Life,

Ever praying for the light of his jade-like hair. — from “In Praise of a God and Silver Painted Scene…,” by Li Po (trans. Elling O. Eide)

Li Po (701–762) is considered one of the greatest poets of Chinese literature. Recognized at the time as a major poet of the Tang dynasty (618–907), Li Po wrote during what is often referred to as the “golden age” of Chinese poetry. With about a thousand of his poems extant, Li Po is a favorite among English translators. Some of the most famous English translations of Li Po were accomplished by modernist American poet Ezra Pound (1885–1972), who largely introduced the Western reading public to the poet. Although it is probable that he died a natural death, the popular account of Li Po’s death — that he drowned attempting to embrace the moon in a river — has passed into popular legend.