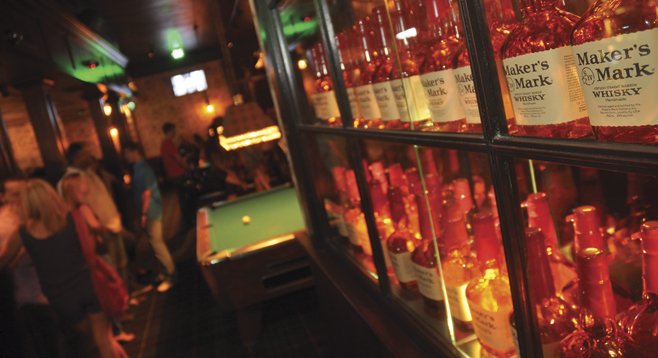 There’s no room for shoulder angels at Seven Grand. They already had their share. They’re afraid of the tartan carpet and the dark wood paneling. They panic at the sight of the wall of whiskey. They want to know where the PBR is, but they have to glumly order a $5 High Life and hide in the corner as far as possible from the stags, jackalopes, displays of rare whiskey and cigars that summon visions of old men with mutton-chops and shotgun collections.

Not that any Highland barons or Tennessee gentlefolk will be setting foot inside Seven Grand anytime soon. The patrons seem displaced from downtown in their collared shirts, cocktail dresses, and occasional Ed Hardy. Yup, this L.A.-owned lounge is definitely the next step in the re-scening of North Park. Tattoo’d, Tecate-quaffing hipsters have already ceded Seven Grand to the young professional types who can afford to drop upwards of $25 on a glass of whiskey from time to time.

The sarcastic shoulder devil says, “Sweet, another place with stuffed animal heads on the walls. I bet the bartenders wear suspenders.”

The thirsty shoulder devil says, “Holy shit, dude, look at all that whiskey!”

In all fairness, the crowd is amicable. They seem to appreciate the finer things in life more than kicking in your head “True North style.” Getting served can take forever because the labor-intensive cocktails put the barkeeps in the weeds when the place gets busy, but the wait is mostly worth it.

The whiskey selection is beyond killer. Even being unfamiliar with whiskey drinking, it’s easy to have a mind-bendingly delicious experience tasting strange, often expensive, whiskeys from parts familiar and unknown. If a $13 glass of rye can taste that good, imagine the gustatory assault that a $60 glass of spirits will deliver to the tastebuds! Cocktails ($10 whiskey-based and otherwise) are elevated to fine art at Seven Grand. The old-fashioned, while perhaps a touch sweet, is addictive and made with Maker’s instead of cheap hooch. Good as it is, it plays second fiddle to the mint julep, which is like the Kentucky Derby and Gone with the Wind doing burnouts in the General Lee on your tastebuds.

Aero Club has 600 whiskeys and is cheaper. 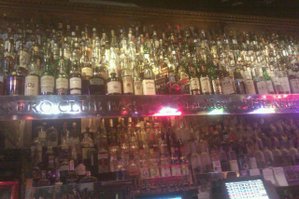 I'm at a loss. How does throwing up a wall of Maker's Mark make it a Whiskey bar? I gotta agree with deniselarson. I'm going with the place that has gotten it right for a long time before it was cool to be a whiskey bar.

The wall of Maker's is decorative, a liquid partition, if you will. The regular selection is behind the bar.

Hopefully the L.A.-owner influence and "the young professional types who...seem to appreciate the finer things in life more than kicking in your head “True North style.” will have a lasting effect on the bar scene in North Park. The crowd that the current 'hipster' bars draw is somewhat less than a desirable element. Nothing wrong with appealing to a classier crowd, it's just a shame that it has to be by charging outrageous prices.

Denise - didn't see your comment til just now. But the stars are apparently aligning for Aero. Not only does my superbud Halylie now tend bar, but the place is getting ink in no less than three outlets this month!

and by Halylie of course I mean Haylie :)