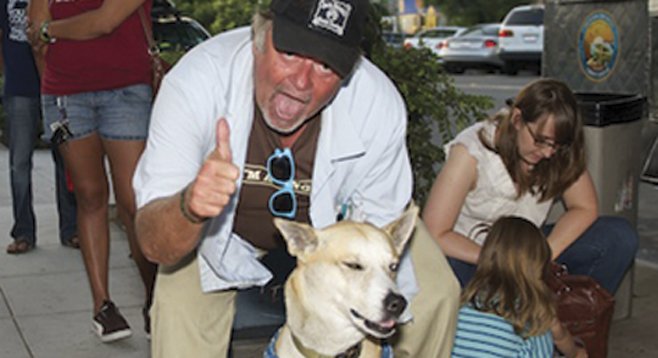 Say what you will about comics fans — they’re a punctual crowd. At the Little Fish Comic Book Studio launch party (which I blogged about in advance last month), people started streaming through the doors at 6:30 like there was nowhere else they’d rather be. By seven, the interior of the building achieved a nasty level of heat and humidity, but it was all good because there was beer. 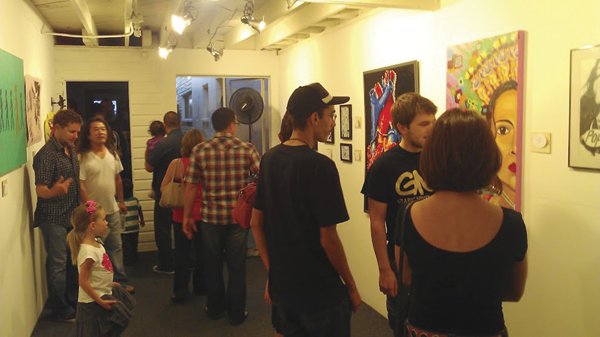 One guy said he felt like he was at a high school party because the mai tais reminded him of drinking “jungle juice” out of backyard buckets.

So much beer. And wine. And a dispenser filled with mai tais.

The organizers went bonkers on the liquor bill. There was enough liquid refreshment in that building for every party guest to drink himself into a stupor and have enough left over for a little hair of the dog in the morning. Of course, if that had happened, you’d be hearing about it on the news, not here in “Crasher.”

One guy said he felt like he was at a high school party because the mai tais, garnished with big chunks of pineapple, reminded him of drinking “jungle juice” out of backyard buckets.

Jubilee Olivas and Kenny Kim from ’90s-themed cover band the Big Lewinsky played acoustic versions of STP and Red Hot Chili Peppers tunes at the back of the studio space with the exhibited artwork. Rumor has it they’ll play the 710 Beach Club in P.B. soon.

The O.B. Seafood truck was on the scene to soothe guests’ hunger. They pulled up out front, opened the windows, and sold delicious yellowtail ceviche, shrimp cocktail, skewered scallops with bacon, and other tasty snacks.

People couldn’t stop talking about the cake. Made and delivered by Emily from Twiggs Bakery, it was a replica of Han Solo frozen in carbonite at the end of The Empire Strikes Back. Set up in the studio, it was equal parts art and pastry.

A rotating cast of characters contributed to a series of comic illustrations destined for the studio’s walls. At one point, four-year-old Lily got her hands on a brush and laid wide, green swaths of paint across whatever canvas she could reach from two feet high.

I met some interesting people at the party, among them: 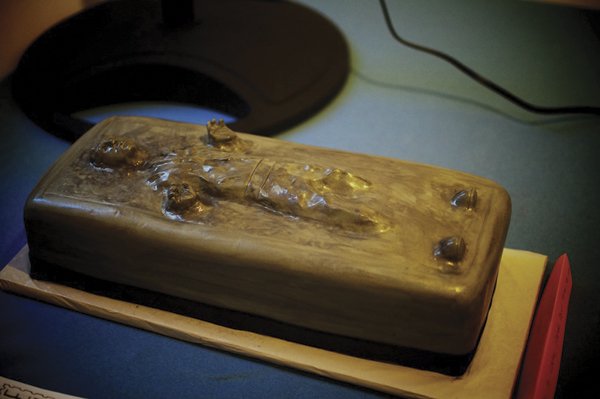 — A guy in a wheelchair, whom I later found out is a prolific writer when someone handed me a stack of CDs that contained audio of his work. I’m stoked to listen, and I have a mission to find out the rest of his story.

— Charlene and Miley, neighbors I didn’t know I had. Miley knew about the University Heights neighborhood tortoise and she told me a story about getting in a staring contest with him one time. “Have you heard of the cat wink?” she asked me. I hadn’t. “It’s like a slow blink that cats do when they really trust you,” she said. “One day, I walked over to the tortoise and he ran up to me way faster than I thought a tortoise could move. I got down on his level and I slow-blinked at him and he started doing it back at me! Next thing I knew, I was having this unreal moment like the tortoise was doing some crazy voodoo on me or something.”

— Gary and Logan who operate the Cellar Door supper club in Normal Heights. I want to go to one of their dinners, if I can just remember to make reservations.

Say what you will about comics fans, they’re a respectful bunch. Come pumpkin time, a hundred people vanished without a trace, leaving behind enough beer for a second party. ■