"In American football... everybody is more likely to admire the big hits” 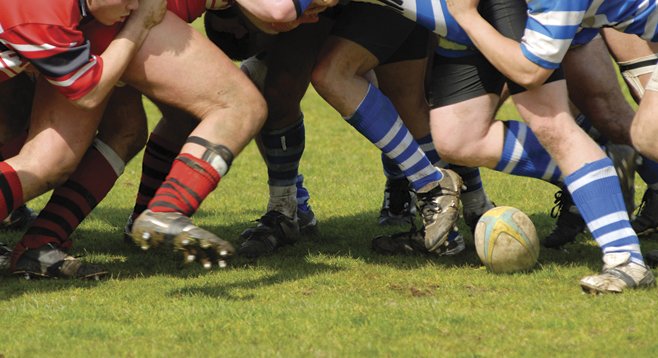 When Poway Youth Rugby coach Phil Calio explains how he teaches the “cheek to cheek” technique, he’s only talking about tackling. “What we teach the kids,” he tells me, “is to attack right at the waist from the side or back. They should keep their heads to one side and wrap their arms around the ball carrier, then drop them and squeeze his knees together.”

Rugby does allow frontal tackles, but leaving your feet and leading with the head like a missile is against the sport’s “laws.” The move might result in a player being thrown out of the game for a safety violation. Thus, rugby’s famous refusal to use helmets. Tackles from the front can still succeed, but the tackler must not simply throw his head or shoulder into the opponent.

Calio got his first taste of rugby 15 years ago while on deployment in the Navy. “We were in Perth, Australia, for six days,” he says, “and had a few Marines on board who had played in college. They arranged a game with a local club team. As a hodgepodge thrown together, we were terrible, and the Australians demolished us.” Besides the fun of the game, however, what impressed Calio was what happened afterward, as the club sprang for food and drinks and engaged their erstwhile opponents in lively conversation. He learned not only that the club members were being nice guys but also that postgame camaraderie is a regular rugby tradition. Not exactly the way most Americans approach their football competitors, he thought. 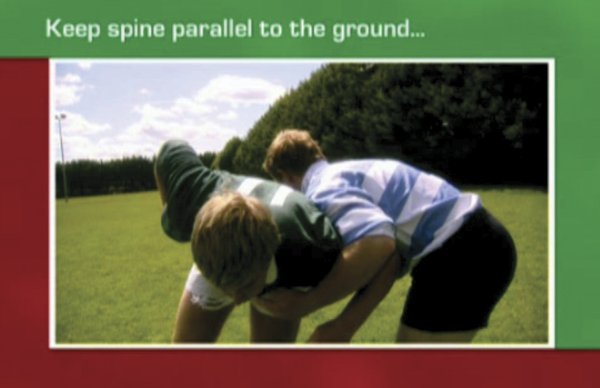 Unlike football players, who are taught to use the helmet when tackling, rugby players are taught to keep their heads to one side.

The Perth game was the last time Calio played rugby. But five years ago, his older son, now 16, joined a youth rugby team in Poway. “I didn’t even know rugby was being played around here,” says Calio, who began attending the games. The following year, his younger son, then 10, joined a team as well, and Calio volunteered to assist its coach for the season (his rugby season begins in early February and lasts until late spring). The Spartan Army, as the team is called, lost its head coach to other interests when February came around again, and Calio took over. He has been the head coach ever since.

I encourage Calio to talk of advantages he sees in youngsters playing rugby instead of football. First off, he mentions the greater ability of each player to participate in all aspects of the game. In football, it often happens that a few stars perform the exciting action, while the role of others is simply to block opponents. “In rugby,” says Calio, “whether you have 7, 13, or 15 players on teams, every single one of them has the opportunity to make a tackle or carry the ball and score. Sure, some players are more athletically gifted and will get the ball more often, but all players have some chance to get their names on the scoreboard. That’s attractive to kids.”

But what parents worry most about are serious injuries, especially concussions and repetitive lesser head traumas, which have been shown capable of causing brain disease later in life. In respect to American football, it’s commonplace nowadays to bemoan the transformation of the leather headgear of the good ole days into today’s hard plastic helmet. Calio agrees. “My older son plays football for Poway High School now and you see that that thing on their heads is a weapon.”

But there’s more to it, Calio thinks, a kind of glorification of violent hits. “In rugby,” he says, “there’s no big emphasis placed on the tackle, per se. In American football, the tackle ends the play. So everybody is more likely to admire the big hits and remember them.” One thinks of how, after a quarterback is knocked to the turf and the play is over, the tackler often goes into a victory dance, jumping up and jabbing his fist in the air. Now, suppose there’s no time to stop and allow spectators to lust over the mayhem. “In rugby,” Calio continues, “even if you make that big hit, the play is still going, and the player tackled may have gotten the ball off to a teammate who can go on to score if you should start enjoying your big triumph. People are not going to remember the tackle; they’ll remember a score you allowed.”

Recently, national pundit George Will suggested on the Sunday-morning television program This Week that it will be parents who eventually force football to change. “It will start at the small level of kids playing football in grade school and then in high school. We now in our hypercautious parenting put crash helmets on children riding tricycles.”

Eleven San Diego County clubs belong to Southern California Youth Rugby, the sport’s regional governing organization. USA Football, although national in scope, is a counterpart for youth football. It is noteworthy that the latter organization has created a program called Heads Up Football. An Associated Press article on August 15 suggested that the program’s “motto could be ‘Get your head out of it.’” The story reported that USA Football and NFL commissioner Roger Goodell recently demonstrated healthy tackling techniques, which are similar to what rugby’s laws require.

Not long ago I ran into a small group of former adult rugby players. They insisted that rugby is every bit as rough as football and that during games there are fights and taunting, just as in football. “Rugby is a substitute for war,” said one. “But it ends after the game when we drink beer with the other team. Football players often seem to hate the other teams.” Could he imagine professional rugby coaches offering bounties to players for knocking opponents out of games with injuries? It happened in the NFL’s New Orleans Saints organization a couple of years ago.

As a fan of both rugby league and rugby union, I wish to thank Mr Deegan for his article. Now if we could only get some love from the Union Tribune and the local sports news along with a youth rugby league started in the communities south of Route 8. As for professional rugby teams doing a "Bountygate", the punishment would be too sever. The national governing body (in our case, U.S. A. Rugby) as well as the IRB (International Rugby Board) would more then likely ban the individuals from participating in rugby (union) for life. So far I've heard of one incident of "Bountygate" at the youth level (http://abclocal.go.com/kgo/story?section=news/iteam&id=8665035).

In closing I would suggest anyone wanting to know more about rugby union in the States check out This Is American Rugby (http://www.thisisamericanrugby.com), for rugby league check out American National Rugby League (www.amnrl.com) and USA Rugby League (www.usarl.com). And if you wish to catch a professional match from Europe, Australia, New Zealand, or South Africa, Fox Sports Plus carries some matches, or you can try www.wiziwig.tv. Enjoy.

A rugby stadium, anyone?

Rugby is now the fastest growing sport in the USA. Now because it is a olympic sport many colleges are starting teams and offering scholarships! Safe Saner and possibly more opportunities available for a HS athlete thats looking to be a college athlete! Newest Club in San Diego is the East County Tribe. You can find out more about this team at www.eastcountyrfc.org , there will be clubs sprouting in south county soon I'm sure!

The commenter above is correct, Rugby is exploding in the States!

San Diego has many wonderful clubs available to athletes, both young and older, experienced and beginners, that are interested in rugby!

The San Diego Athletic Club has multiple teams ( for girls and boys) in various SD high schools, a youth program, and an adult program. We practice at Dusty Rhodes in OB and in Mira Mesa ( for those athletes that live closer to Mira Mesa) for our youth programs, our men's program practices at Robb Field in OB and our High School program has club teams in schools such as Patrick Henry, Westfiled, Rancho Bernardo, High Tech High, Point Loma, Kearny, Clairemont, UC High, Hoover and more!! High school season begins shortly! If your high school doesn't have a team you can play at the school closest to you! You can find more information and a complete listing of our teams at: 1: http://aztecrugby.org Aztecrugby.org