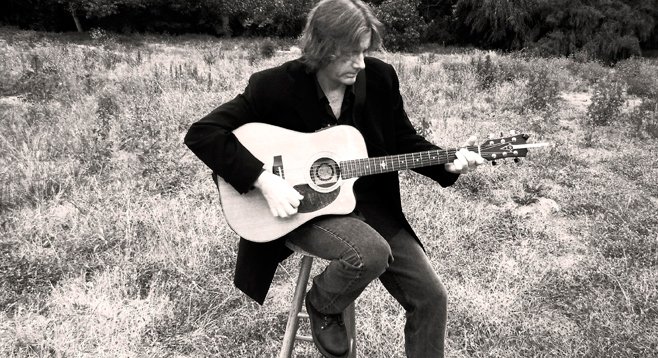 With most performers working hard to promote digital downloads of their newest music, singer/songwriter Scott Wilson is building an online archive covering three decades’ worth of everything from acoustic solo tunes to songs written for movie soundtracks (Tombstone, Better Way to Die, Henry Poole Is Here), country rock (he was a founding member of the Gandhi Method), instrumentals created for TV shows like VH1’s Behind the Music: Bobby Brown, and even an ’80s glam/new-wave outfit whose brief and unlikely overseas success he admits being embarrassed by.

“The opportunity came from winning a Pro subscription on the SoundCloud website. I already used the free service, which allows 120 minutes of music that can be conveniently posted on Facebook and Twitter. But the Pro service offers 36 hours.”

First uploaded were Wilson’s earliest recordings with AOR glam band VFX. “Eighties music was basically crushed in the early 1990s, thanks to Nirvana, Pearl Jam, and Smashing Pumpkins. I couldn’t stand all the bands that VFX was compared to, and I wasn’t sad to see that style of music go, although I hear it’s still a popular underground form in Europe and Japan. VFX turned into a cult-like band that had its detractors.... I walked away from this style of music in 1994 and never looked back.”

Also archived are songs from Wilson’s alt-rock group Cruel World and more recent recordings done solo and with his acoustic band (the Complications) and an electric ensemble (the Contradictions). “So far, I’ve uploaded about 120 songs. I think I have 28 hours left, so I’ve been going through my DAT collection.”

Wilson, whose video for “Coffeehouse 101” features around 50 local performers (each lip-synching a line from the song), began recording a new full-length in March. “Nathan Walsh-Haines [the Broken Stems] played drums in my rehearsal studio downtown, I played the bass and most of the guitars, and, so far, Jonathan Hayes [VFX], Tim Orrahood [Vacscene], and Norm Merton [John Stanley Band] have all played lead guitars on the tracks. I’m working my way through guitar solos, then lead vocals, percussion, and then polishing, which may take a while.”

A new demo called “I Know,” featuring guest guitarist Dave Gladish (Ristband, Roxy Monoxide), is currently streaming online, as are newly shot videos for “Take It Away” and “Shade of Eden.”

The music archive is at approximately 220 songs at this moment and can be found at http://www.soundcloud.com/metapunk