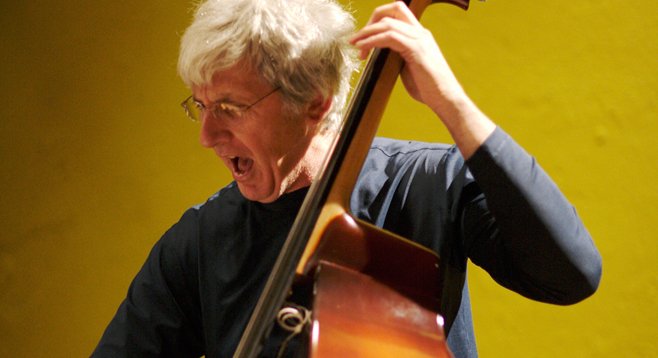 Bassist Mark Dresser continues to gig in Europe and the East Coast rather than home in San Diego at a 10-1 ratio. “It’s difficult to think of San Diego as home base,” said Dresser during an interview in his office at UCSD. “Even though I moved back here from New York in 2004.”

Dresser’s office has room for four double-basses, a computer, and a small piano. I came to get a personal demonstration of some of the many “extended techniques” he has mastered on the instrument. I asked him what the month looked like for him.

“I’m in Copenhagen working with Irina for about a week — that’ll be dedicated just to the commission — then I’ll go to Iceland, Reykjavik, for a workshop, solo concert, and gigs with Icelandic musicians for three days...then back to Copenhagen. They are having a 2012 bass convention of sorts — organized by some Danish bassists. It’s an international event — and I’ll play a solo concert and do a solo seminar. I’ll be demonstrating some of the things I just showed you. Then we’ll perform a version of Deep Tones for Peace (a piece he wrote for multiple bassists), and then I’ll come home...to chill for ten days, which will be nice.”

There won’t be much time for chilling, though.

“Then, there’s a bass festival in Tijuana, and I’ll be going there,” says Dresser. “That lasts a week, and afterwards I’m doing a recording with [saxophonist] David Borgo.... Then we’re into September and I’m going to New York, doing a gig at Cornelia Street Cafe, and I’m making a second recording with my East Coast Quintet for Clean Feed Records. On the 5th, a duet gig with Diane Moser, the 6th I’m doing a master class, on the 7th a gig at the New School, on the 9th I’ll be recording a new album with Diane [Moser], and on the 10th a gig in Baltimore. Then on the 11th I have a gig with Sarah Weaver at the Iridium back in NY, and on the 13th a solo gig at Shapeshifter Lab in Brooklyn. I’ll go to Boston on the 14th where I have a double bill with guitarist Joe Morris, then we’re going to do the same thing on the 15th in Hartford, Connecticut....

“Then I’ll come home around September 17, because that’s ‘Welcome Week’ at UCSD.”

big love for the man. enriched my musical life immeasurably