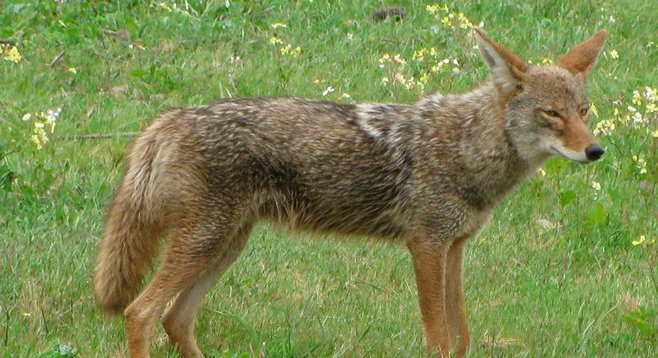 We were having a barbecue in the backyard with friends when a coyote showed up, killed two of my chickens, and absconded with one of them by leaping over our back fence. Everyone was amazed. I was mad.

“Coyotes usually hunt in early morning or closer to evening, especially if you’re in a more urban area,” said Eric Voigt of Wildlife Removal Services, Inc. (619-228-5258, wildlife-removal.com). “But if you’re in a rural area, or if food is becoming scarce and coyote populations are going up, they’ll come out in the middle of the day looking for food. Especially when it’s something easy, like a chicken.” Coyotes, he said, generally come into a yard by either jumping a fence or digging under it.

Live trapping in cages “is not really effective. They’re too smart. The best thing is to use noose traps or leg-hold traps. If a coyote is digging under a fence, you may be able to set a noose. You can also try hazing — using noises or lights to deter them. You usually use a device that works with a motion detector, and that works for a while. But physical barriers are the only way to keep them out for good.”

Voigt can install electric fence wire and/or roll bars to help. “Roll bars are free-spinning bars that mount on the top of your fence. Most coyotes can’t clear a six-foot fence just by jumping it. They’ll put their front paws over the top and then pull themselves over. If you have a roll bar, the bar will spin and the coyote will slide off. Electric fence wire can run in a single strand along the top or bottom of the fence.” Price for either option “will depend on the size of your fence. I’d say you’ll start at $400–$500 and go up from there.

When I told Scott Thomas of AA Trappers (714-855-8690) that the coyote had taken one of my chickens, he said, “It’s going to do it again. The coyote has already associated your piece of land with a food source. It will come back every day. Coyotes are smart. They used to hunt at night, but people started bringing their pets in at night. The coyotes caught on, and now they’ll take pets in the middle of the day. They’ll take anything under 20 pounds.”

Thomas uses foot clamps to catch coyotes. “It’s like a bear trap — they step in it. I usually bait it with red meat. The bait and the trap have to be buried. I make it look like another animal has buried food. It’s very tricky; you have to have the correct distance between the trap and the bait. I can’t leave any scent when I set it. There can’t even be rust on the trap; they’ll smell it, realize it’s not natural, and refuse to go near it.”

What about my kids? “It won’t catch a kid’s foot; their feet are too big. If the trap was dug up, it might snap on a finger and hurt really badly, but once you unlocked the trap and got the finger out, it would be fine. It’s just designed to hold the coyote. Then we come and put it down.” One month’s service (with unlimited coyote removal) is $385.

Finally, I spoke with Jeff Solomon of RunCoyoteRun.com. “Within three months of moving into our new home in Texas,” he explained, “we lost three cats to coyotes. Now, we owned 20 cats, so we started looking for solutions. I became friends with a guy who lived down the road, an avid hunter. He said the sounds of a coyote’s natural predator would chase it away. I found some public domain sounds of territorial big cats and put them on an 80-minute CD at five-to-seven-minute intervals. Then I hid CD players under plastic drums and covered those with branches. I had two CD players going 24 hours a day. We haven’t lost a single cat since we started in 2009.”

At first, he said, “the sound may be distracting. But after a while, it becomes part of the background noise.” The CD will last about 10–12 months before it burns out. Cost is $20 per CD. Shipping is free.”

How come "Best Buys" Eve Kelly lately is so into the interface of humans and their pets with wildlife? She used to review stuff like best lip gloss for the money.

All these expensive and cruel interventions could be avoided by bringing the pets indoors. And anyway, I always thought most Reader readers lived in the city.