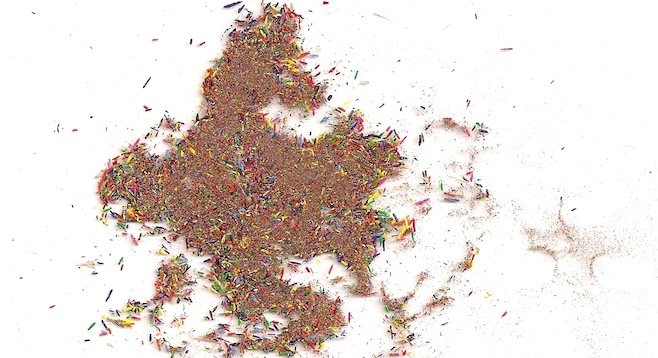 When I pulled up at Mike’s studio and his car was nowhere in sight, my gut clenched with comprehension. I knew even as I was texting “Where are you?” that Mike was a no-show. My suspicion that he was south of the border was confirmed when I tried calling him and I heard the telltale beeps of a phone that had left the country.

“I can’t fucking believe this,” I said to David. “He said today worked best for him. I confirmed the time by text just like he asked me to, and he responded that it was perfect — he used that word! It would be one thing if we were just meeting up for coffee and he flaked, but this is different. There are other people involved. This took coordination and effort, not to mention everyone’s time.”

“Can you go explain to them what’s going on? I’ll be there in a second. I just need to calm down.” David went to greet the rest of the team. We were all there to film Mike at work in his studio for a portion of a local television show I’m producing.

I stared at my phone in defeat. Mike wasn’t a flaky person, in general, but it’s not like this was the first time he’d missed a meeting, either. There had been a few occasions, some for work but mostly social, when I had to remind him I was waiting for him. That’s the bit that burned — I should have known better.

I don’t like to rely on people. I have difficulty dealing with disappointment. I blame my parents for that, for always coming through for me when I needed them; that sort of behavior doesn’t prepare a person for the real world.

There was a chance Mike was dead in a ditch somewhere, or in the hospital, or held hostage by a drug cartel. Those would have been the only excusable reasons for not giving me a heads up that he wasn’t planning to make it. Even a text or email at 3 a.m., from whatever party he’d obviously been at, would have given me enough time to make other arrangements.

After taking some deep breaths, I emerged from my car to discuss plan B with the guys. Fortunately, they were easygoing and waited patiently as I furiously tapped on my phone, searching for an 11th-hour savior. I bought everyone lunch (my guilt for having scheduled a dud), after which we caravanned to the studio of a wonderful artist who was willing to accommodate us on a half hour’s notice. We filmed what turned out to be a better shoot than the one I had envisioned with Mike, but despite my delight in how well things unfolded, I was still seething at my friend for leaving me hanging.

As evening approached, I began to wonder if something terrible had indeed happened to Mike. Perhaps he pissed in public and got arrested? Maybe he messed with the wrong prostitute? For the first time, my anger gave way to worry. Surely, if he had just been partying all night, he’d wake up at some point in the day to call or text with some half-assed apology. To hear nothing meant something could be seriously wrong.

The following morning, nearly 21 hours after our scheduled meeting, I stared, almost bored, at the image of Mike’s face on my phone as it rang. I didn’t answer. I already knew that whatever story he’d hatched was bullshit.

Five years ago, he could have told me anything and I’d have had no evidence to the contrary. As a friend, I’d have no choice but to believe him. But now, social media makes it impossible for anyone but the super stealthy to keep a secret, and Mike had made a glaring mistake in what otherwise seemed to be an attempt to remain radio silent. Seven hours after our scheduled meeting, he had “liked” a video on Facebook. That’s when I knew he was alive and well, and, most importantly, that he had access to the internet.

I couldn’t bring myself to listen to the message. “I don’t even want to hear his voice,” I said as I handed David my phone. “Could you just give me the gist?”

As David listened to the message, his eyes rolled. He set my phone on the table between us and summarized: “He says he lost his wallet and phone, that it turned out to be in a friend’s car, and he didn’t get it back until this morning, so he was stuck in TJ.”

“If you lost your phone and you had an appointment, what would you have done?”

“I’d have found a way to contact him,” I said. “I’d borrow a friend’s phone, and if I couldn’t remember his number, I’d ask one of a hundred mutual friends; and if no one had it, I’d email or Facebook. It’s not like he was beyond civilization. He’s always online when he’s in TJ.”

“Yeah, that’s what I was thinking,” David said. “I’m pretty sure that if he knew he had to get ahold of us because we had a million dollars for him, he would have found a way.”

“I’m so tired of being disappointed,” I said, dropping my shoulders. Mike’s no-show had capped a week of friends and colleagues falling through on their commitments. I keep expecting others to do what they say they will; each time someone lets me down, my faith in people is further ground under heel. I fear one day I’ll have nothing left but a handful of jaded dust. “Are my expectations really that high? Are they too high?”

“No,” David said emphatically. “You ask someone, ‘Can you do this thing?’ They say ‘yes,’ and then they don’t do that thing. That is absolutely not expecting too much. But I’m with you, this shit’s really getting old.”