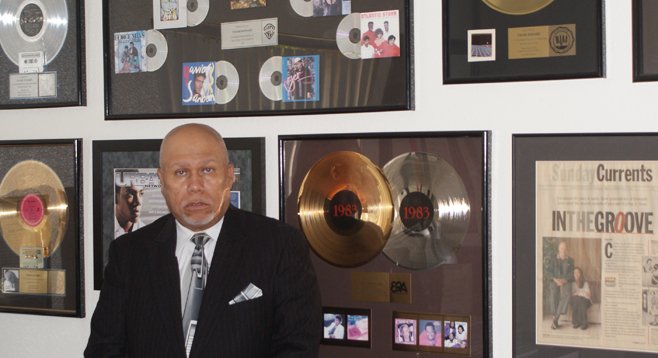 “We’ve been on the air a little over a month,” says radio-personality-turned-entrepreneur Tayari Howard. “We went live on September 17.” His KKSD is a web radio station devoted to smooth and straight-ahead jazz. The station is also Howard’s answer to his former employer’s decision to dump smooth jazz programming and clean house. 98.1 KIFM terminated Howard in May of 2011.

“I was the first person to be laid off,” Howard told the Reader's Jam Session blog in February. “After me, they laid off the rest of the house, so to speak, somewhere between 10 and 14 people.”

Howard now functions as CEO, president, program director, music director, and morning-show host. He also handles outside sales for his Tayari Media Group. “I don’t sleep. Just give me two prenatal vitamins and a Coca-Cola, and I’m good to go.” Tayari Media operates both KKSD and KBLK, both headquartered in the Urban League offices on Market Street in Southeast San Diego. KBLK, destined to be a community all-talk station, is presently not operational for lack of program hosts, he says.

It cost $25,000 each to equip the two studios. They contain only the essentials: furniture, mixing tables, microphones, and computers. He says he was able to find an “angel” who put up $10,000 of seed money. The rest of his operating capital, he says, is coming through the private sale of stock in Tayari Media Group, Inc. He says there is no money yet for salaries, including his own. “We eat scraps from the tables of the community leaders that sponsor us,” he chuckles.

Howard plans to give hometown jazz artists a stronger presence on KKSD. He says that KIFM bosses forbade him from airing much in the way of local or even regional talent. “Out of the 77 records that I play on my show at present, six are from local artists. I think I can do better. Much better.” For submission guidelines, Howard suggests emailing him at [email protected].