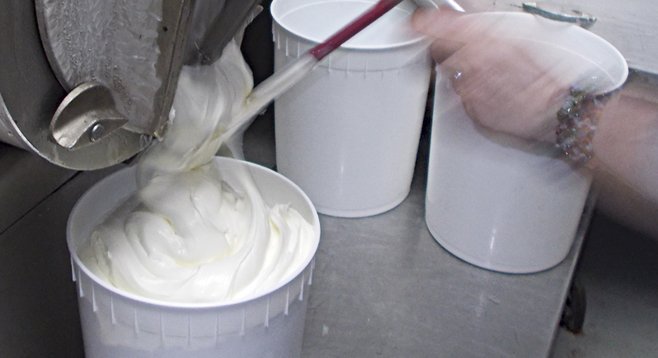 The ghost of Elmer Niederfrank appears.

She’s holding a white plastic bucket, leaning over the 100-year-old, belt-driven ice cream–making machine as it glugs out a giant tube of cream-colored ice cream.

“Mr. Niederfrank was here from 1948, doing just what I’m doing,” Mary Ellen says. “I’ve been here since 1995. That’s when my partner Paddy Finnegan and I bought the place.” 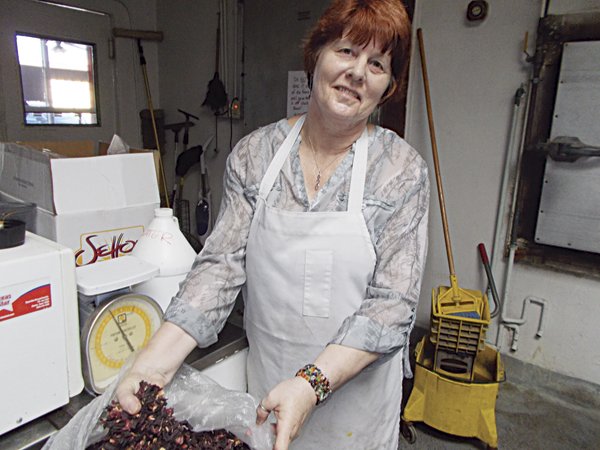 Mary Ellen in the kitchen

This is a shop in the older part of National City, which, turns out, is the second-oldest city in the county, after San Diego. It’s where Mr. Niederfrank arrived in 1948 with the idea of making ice cream the way they did in Germany, where his family was from. He bought a secondhand belt-driven ice cream–making machine, a wood-lined freezer, a cone-making machine, and set up at 726 A Avenue. The shop is unchanged since he froze that first batch of ice cream 64 years ago. The machines are the same. Stainless-steel milk cans still fill the shelves. The method of making the stuff is the same, as is the back-breaking work of heaving giant tubs of ice cream around.

Only difference: it’s red-haired Mary Ellen Faught who is doing the work. She mixes up flavors — from mint to pistachio to Guinness stout with dark chocolate to fennel to licorice.

Pistachio, she says, is so good. “I mix it with pineapple and other extras. If I had to live on a desert island with only one flavor, that would be it.”

I’ve learned all this after noticing the Niederfrank’s sign and talking to a couple out on the sidewalk patio. “Have the vanilla float,” Jimmy Cucinotta says. He and his wife Barbara — she has a dish of “Cappuccino Crunch” — are up from Rosarito. “This is where we come, every time,” Jimmy says.

I head in, past a big painting of National City back in the day. Inside, it’s mostly white, with a butter-yellow skirting board and a black-and-white-checkered tile floor.

I see about 50 buckets of ice cream laid out on the long freezer-counter. Pistachio, green tea, and — wow, French vanilla with Stone Brewery’s Smoked Porter beer in it.

“I pour a growler and two liters of the porter into every five-gallon batch,” says Mary Ellen. The newly minted ice cream goes from Mr. Niederfrank’s ice-cream maker into five-gallon buckets, then she hauls them off to the freezer: a brass plaque on the door reads, “Mundet Cork Corporation.”

Mary Ellen claims that her ice cream is healthier; for the same reason, it’s a little expensive.

“Five gallons of mine is like ten gallons of the commercial stuff. That’s because they blow air into theirs — till it’s 80 percent air.”

So, if I’m eating that much more cream per slurp, how much more fatty is her ice cream?

“My butterfat content is 14 percent. Häagen-Dazs can be around 22 percent. But it’s all about moderation. Besides, chemicals are what the body can’t handle, not pure cream and sugar.”

She’s standing beside a huge bag of dried hibiscus flowers and another bag loaded with pistachio nuts. The real thing. Not crushed, powdered, or treated.

“We won’t touch chemicals or dyes. That’s why our ice cream isn’t colored electric green for mint or orange for orange. What’s bad for you is the chemical additives.”

Jessica, who’s looking after the front of the shop, gives me a sample of the French vanilla with porter.

Mmm…you get that malty taste. But the thing I notice most is how creamy it is.

I look up and down at the 50 tubs. So much here that I’d like to taste. Like the champagne ice cream (“I pour seven bottles of champagne into it”). Or the merlot or the cabernet sauvignon (“I won’t sell those to kids”). Or the one with green tea, from Japan. Or the hibiscus-flavored one. “I steep the hibiscus flowers as I steep tea, to get the fragrances,” she says.

What about the ghost? Mr. Niederfrank? 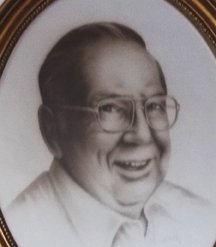 “I feel him here sometimes, especially at night. But he’s not objecting. Not haunting. I think he’s pleased that Paddy and I are carrying on. That we haven’t changed a thing.”

Jessica’s waiting for me to order.

“I’ll have the small dish of that one.” I point to a caramelly mess at the end, the butter-rum pecan. It’s good, too, but instantly, I wish I’d been more adventurous. Tried the ginger or the Kahlua Krunch, or the one with the seven bottles of champagne. Guess it’s a childhood thing — caramel was always my go-to flavor.

I get some Mexican Spicy Chocolate to rush back to the lovely Carla. And, yes, she lets me grab a spoonful. And, hey, I’ve just eaten my first spicy ice cream.