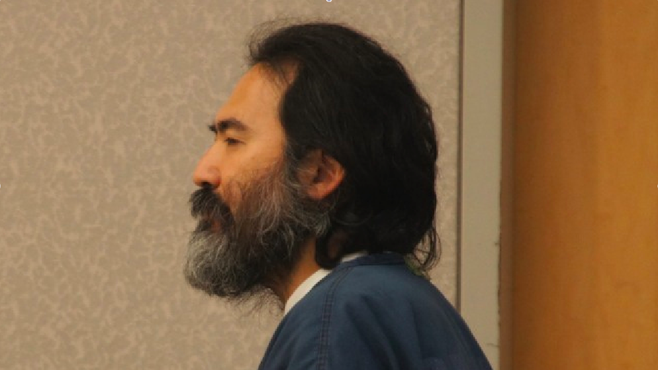 It took five deputies, four bean-bag rounds, one taser, and a dog to extract a renter from an apartment in Vista, according to recent testimony in San Diego’s North County Superior Court.

Toshio Suzuki, then 38 years old, moved into the Sycamore Ridge Apartments in the summer of 2003. Things went well enough until he stopped paying rent in December of 2009.

In February 2010, deputy Claudie Newsom went to serve the “pending eviction,” a “notice to vacate,” at apartment number 273. It was a ground-floor unit on Hibiscus Avenue.

“On the door was a lot of writing,” the deputy remembered. He found pieces of paper taped to the door; it was strange writing. “I know it wasn’t English.” Newsom thought it might be of “Oriental descent.” There was also writing that the deputy could read; these notes stated the writer believed in “the Freeman” philosophy – libertarian beliefs that reject government control of a person or his liberties. The writing also warned “not to enter if you don’t have a warrant.”

Newsom said “It didn’t appear that the person would be forthcoming,” so he decided to request “additional personnel” for the day of eviction, which would be the following week.

The afternoon of February 18, 2010, Newsom went to Suzuki’s door again. He said he knocked loudly and made a standard law enforcement announcement. He said he called it out at least six to eight times. He heard sounds inside.

“We heard the sound of door locks,” a metallic sound. The door cracked open less than an inch before slamming shut. Then there was the sound of locks again. Newsom tried the door handle. It was locked.

Deputy Jacob Pavlenko said the plan was for Newsom to knock on the front door, to “create a diversion,” while other deputies went to another set of doors. A group of officers gathered near a sliding-glass door on a small patio: the sergeant was ready with his taser, one deputy had a bean-bag-rifle, one deputy tried to keep his dog quiet, and one deputy had his bulletproof shield ready.

A deputy fired two bean-bag rounds at the sliding-glass door, shattering it. However, the glass of the door did not fall down, so deputy Patrick Morrissey went forward with his shield and used it to push in the broken glass. Then he entered the apartment. Morrissey said he could hear someone speaking in “an unknown language.” Then he saw the man.

“He was coming at me,” said Morrissey. “He had about a three-foot metal stake. He was swinging it at me.” Morrissey said he backed out, yelling, “He’s got a stick!” and the other deputy fired two more rounds of bean bags, this time at Suzuki. It is unclear if those bean bags found their target.

Next, Pavlenko brought forward his canine, Gonzo. Pavlenko pulled the tall vertical blinds aside with his hand because they were obstructing the view. At the same time, Gonzo put his paws onto a table that was just inside the apartment. The table had been pushed up to the sliding-glass door as a barricade.

Pavlenko said he saw “Mr. Suzuki standing there with a stick. He took a swing at me. He swung as soon as my head went into the threshold area.” The deputy pulled his head back in time. The next swing was at Gonzo, but the dog was pulled off the barricade in time.

The sergeant deployed his taser and Suzuki went to the floor. Then the dog was unleashed. “Gonzo went in and bit him on the right leg,” Pavlenko recalled.

Pavlenko said Suzuki never stopped struggling, even after he was handcuffed. The deputies said they needed to continue restraining Suzuki while they waited for an ambulance. (It is standard procedure to have persons bitten by a police dog evaluated by medical personnel.) Pavlenko said Suzuki was carefully escorted to the ambulance because officers believed he was still trying to “escape.”

Two years later, Suzuki, now 47, went on trial. He consented to a bench trial, which means one judge heard the evidence, instead of a 12-person jury.

Judge Daniel Goldstein looked at an evidence photo and decided the “metal stick” was a towel bar. At the end of the two-hour trial, the judge admonished Suzuki. “When officers arrive, you must put your tools down and consent to arrest.”

Goldstein found the defendant guilty of four misdemeanors and one felony resisting arrest on October 23.

The judge ordered a review of three mental-health exams that have already been performed on Suzuki. The sentencing date is set for December 7.

Two years later, Suzuki, now 47, went on trial. He consented to a bench trial, which means one judge heard the evidence, instead of a 12-person jury. Well, that was the biggest blunder you could ever make, especially a judge was was an ex prosecutor.

Hey, the guy rolled the dice. But I think this time he may have crapped out. Personally, I think the guy should be in a mental ward.

Suzuki just lost control of himself in the heat of the moment. He probably lost his job during the Bush financial collapse and couldn't find another one. His unemployment benefits gone, his savings exhausted, he probably just snapped. He should not have been arrested or charged with a crime. The Sheriffs should have hand cuffed him and held him an hour or so until he cooled down. Then he should have been released without charges. The DA is prosecuting way too many episodes like this. Suzuki's transgressions were mild, and he should not have been prosecuted. Filing felony charges in a case like this is just way over the top. Convicting him of four misdemeanors and one felony is insane.

I missed the felony conviction, you are 100% correct, a felony charge over something this minor shows our DA is a buffoon........