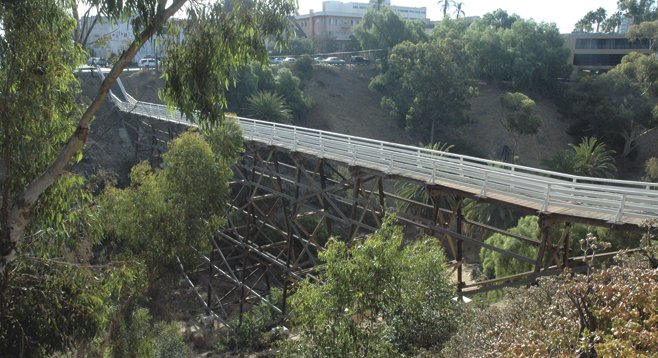 An early start is highly recommended for prime parking, less traffic, and lower temperatures for this interesting walk that is a blend of historic to current bridges and houses along former streetcar-access routes. The tour starts on the east side of Park Blvd. and Village Place at the Inez Grant Parker Memorial Rose Garden, one of only four U.S. gardens that has received the Award of Excellence from the World Federation of Rose Societies. For those with allergies, there is also a xeriscape garden to view before crossing the first bridge toward the San Diego Natural History Museum (home of the Canyoneers!). Continue west along El Prado through the middle of Balboa Park, passing museums and the lily pond, continuing across the 1914 Laurel St. bridge, the first multiple-arched cantilever bridge built in California, which spanned a small lake during the 1915 Panama-California Exposition.

Remain on Laurel St., crossing Second Ave. to view one of the ten churches Irving Gill designed on the southwest corner. Follow Second Ave. north for one block, then turn left on Maple to Albatross St., where you will see a plaque commemorating Waldo Waterman’s flight of a biplane hang-glider launched by auto-tow in 1909. Retrace your steps east for two blocks, turning north or left onto First Ave. for the third bridge.

The First Ave. bridge was built in 1931, shipped to San Diego to be reassembled in place. It is still the only steel-arch bridge in the city, reopened in 2010 after a 15-month refurbishment that included retrofitting to California earthquake standards and removal of lead paint. After viewing Maple Canyon, continue on First Ave., then turn right on Quince St. for two blocks to the Quince St. bridge entrance. The wooden-trestle bridge was built in 1905 at a cost of less than $1000 to allow easier access to the Fourth Ave. trolley station. After crossing to Fourth Ave., retrace your steps to Second Ave. and turn right (north) for two blocks. 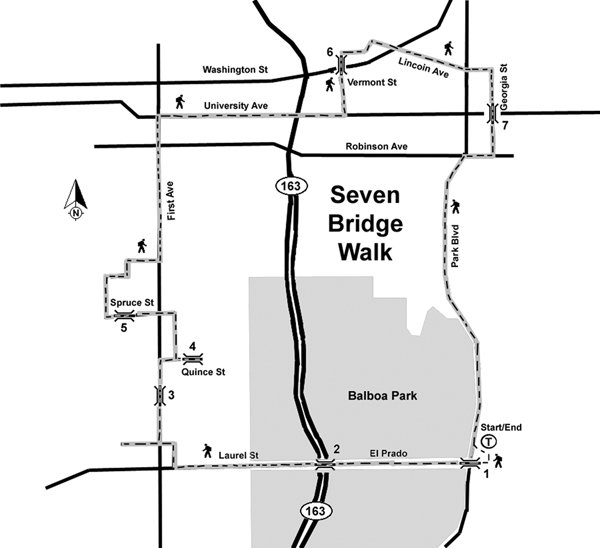 Turn left (west) on Spruce St., past the “Not a Through Street” sign to the 1912 Spruce St. suspension bridge. Enjoy the movement when crossing over Kate Sessions Canyon, turning right on both Brant and Upas streets. Turn left on Albatross St., right on Walnut Ave., then left on First Ave. for four blocks to a right turn on University Ave. Now would be a good time to pick out a place for a short break before continuing on University Ave. As you walk past Tenth Ave., notice on the southeast corner The Loading Dock mural created in 1999 by Linda Churchill. Turn left at Vermont St. to the end of the shopping center to the present 1995 Vermont St. bridge with its words of inspiration to read while crossing Washington Street. It replaced the 1916 wooden-trestle bridge that eased usage of the University trolley line that was the primary transportation line in San Diego from 1888–1949.

After crossing the sixth bridge, turn right (east) on Lincoln Ave., then take a right (south) turn down Georgia St. one block to the seventh bridge on this tour. In 1907, a redwood-truss bridge was built after the ridge was cut to allow the streetcar line to extend eastward to Fairmont Ave., opening North Park and other surrounding areas to development. In 1914, the current concrete bridge was built and is now designated as a local, state, and national landmark. Turn right/west on Robinson Ave., then again left (south) on Park Blvd. for a mile to return to the start.

Distance from downtown San Diego: 2 miles. Allow 10 minutes. Take Broadway (east), then turn north on Park Blvd., parking close to the east end of El Prado, near the intersection of Village Place. Parking location and use of facilities is dependent on time of day and locations of stops. Bring water due to distance, temperature, and humidity.

Hiking length: Approximately a 5.5-mile loop. Elevation gain/loss, 200 feet. Difficulty: Easy, mostly flat with elevation changes along upper contours of canyons and steps for Spruce and Quince street bridges. Also, some sidewalks are narrow or buckled in places along the route.

The Spruce Street Bridge is my fave. I never get tired of walking across it. The Georgia Street Bridge is slated for reconstruction as it is not earthquake-proof. See my article at: www.sandiegoreader.com/news/2011/nov/01/stringers-caltrans-deems-georgia-street-bridge/

Really enjoyed this walk yesterday. I didn't know we had a suspension bridge and I didn't know of the canyons we crossed. I've lived in SD 54 years and had never really "seen" this neighborhood either and observing the various architecture and history was enjoyable as well. Thanks for the article.

And here's one of the Vermont Street Bridge sayings. 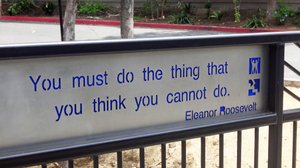 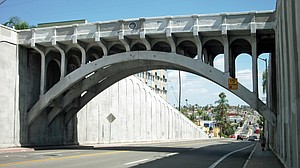 Top photo has an incorrect caption -- The Quince Street Pedestrian Bridge does span Maple Canyon, but between Fourth and THIRD avenues in Bankers Hill. 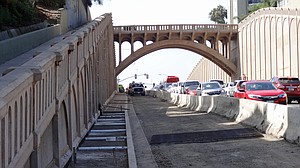