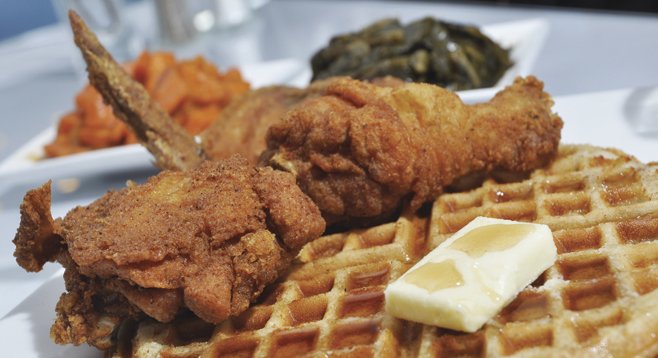 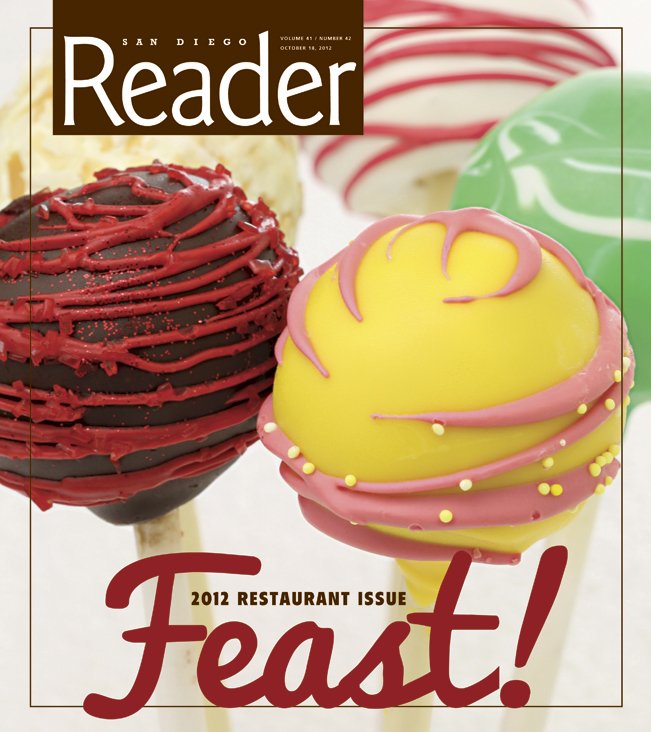 The background photo on my brother’s iPod shows a plate of fried chicken and waffles from Roscoe’s up in Los Angeles. Before dining there, he had never enjoyed the two foods together, and he was moved by the experience. I mentioned this to a friend of mine, a woman now living in Texas but hailing from Georgia. I said I supposed the dish had originated in the South, given that region’s proliferation of Waffle House restaurants. She protested that the Waffle House served only grilled chicken, and that she had never in all her born days heard of such a thing as chicken and waffles. She all but intimated it was the kind of unnatural aberration that might be expected from denizens of the Left Coast. So I thought I’d take a look around and try some straight fried chicken while I was at it.

Nota bene: Alas, Crispy Fried Chicken has discontinued their waffles, though they still serve plenty of chicken. And I wanted to try Sister Pee-Wee’s and Annie Belle’s, really I did. But, dadgummit, I visited both during posted hours of operation, and they were both closed up tight. Maybe next year.

Stockdale’s Fine Southern Cuisine
“You know where chicken and waffles got started?” asked the proprietor, speaking low and slow. “The Lincoln White House. Then it spread to the South.” File under: awesome yet dubious claims (though I have seen references to Lincoln’s eating johnnycakes and chicken). Origins aside, it’s a fine combination — sweet, salt, and oil...what’s not to love? And this version is a winner ($7.95). The pebbly, salt ’n’ pepper coating isn’t there to hog the spotlight; rather, it sets the stage for the moist goodness of a thigh you can pick clean and a huge wing with huge flavor. The thin, bready waffle tastes of the iron the way grilled meat might taste of the grill, seasoned. (Also best: the papery greens and the lighter-than-air sweet-potato fries, though you don’t automatically get sides with your waffle.)

Bonnie Jean’s Soul Food
Really, it’s almost a toss-up between these folks and Stockdale’s; it might just depend on your mood. The crust shows off more than Stockdale’s — it’s flakier, like good pie crust, and a bit more oily. The meat tastes gamier and less seasoned, but it may be even juicer. The waffle is eggier, heavier, almost gingerbready in flavor. “This waffle will get you and your family through three days of darkness,” prophesied the Wife. (Two-piece chicken and waffle, $9.99. You’ll pay extra and might have to wait for a breast. Maybe stick with the dark meat; it’s easier to keep moist, and, again, the wings are huge.)

Hash House A Go Go
“Twisted farm food” is the motto here, and they’ve got the agricultural implements on the wall to prove it. “Sage fried chicken stacked on our smoked bacon waffle tower all crowned with hot maple caramel reduction and fried leeks, $19.95, New York Times Favorite!!!” declared the menu. And to hear the Wife tell it between swooning mouthfuls, the Times got it right — on one condition. “It works if you put it all in your mouth at once,” she insisted over my objections that the hunks of boneless chicken breast were jerky-dry, the corn-flake crust was chewy and uneven, and the monster waffle was downright rubbery. “Yeah, but there’s awesome bacon inside the waffle,” she argued. “And the fried leeks!” True, the fried leeks. Also, the maple-caramel reduction lent a fragrant sweetness to the whole.

Best Chicken and Waffles from a Chain

Louisiana Famous Fried Chicken
Come on, now — it’s a chain. So, yes, they’ve got their fried chicken under a warmer when you walk in, and, yes, that means it may not be at the peak of deliciousness. But when we visited, they didn’t have any breasts made up, and they happily fried one for the Wife. The fluffy waffle, too, was made fresh to order. The crust was on the thicker side, and it carried most of the flavor. Finally, the price was right: a waffle with a breast or waffle with two pieces of dark meat will run you $7.

Gingham
They don’t even call it fried chicken on the menu: “Milk Butter Chicken, Green Beans, Brown Butter, $17.” But, oh, yes, it’s fried, after soaking in the aforementioned milk long enough to keep even the white meat drippingly juicy. A half chicken (wing, breast, leg, and thigh) is jacketed in a peppery crust that gathers in the crevices and holds a cracker crunch against the tang of the brown-butter drizzle. The bird sits atop a lumpen bed of smashed potatoes; the beans sit on top of the bird; and the whole thing is crowned with a nest of crispy fried shallots. Solid execution, gussied up just enough to make it a restaurant dish.

Crispy Fried Chicken
Batter? Coating? Who needs ’em when you’ve got chicken that tastes just salty enough right through to the bone and bubbling hot oil? Unadulterated chicken skin makes a fine coating all on its lonesome when you get it this crackly-crisp. If you ever need to bring, say, 15 pieces of fried chicken home to a houseful of starving-yet-discerning souls, and you’re at all worried about things getting soggy along the way, let these folks put your mind at rest. It’ll run you $14.99 for a mixed selection (though the breasts can be shreddy and on the dry side).

BBQ Chicken
That’s BBQ as in, “Best of the Best Quality,” not barbeque. Because, of course, it’s deep-fried — in olive oil, which seems to permeate the meat, rendering it fragrant and unctuous (if dry on the breast). Here, however, the meat is the bedrock below the fissured, folded, and layered landscape of uniformly crunchy crust. So crunchy, it shatters when chewed; so crunchy, it endures the twin trials of travel and refrigeration. Yessir, it’s crunchy (five pieces, $9.45). And the jumbo-sized double-crunch chicken wings (ten pieces, $9.95) are indeed very nearly doubly crunchy (also spicy). ■

Does anyone have recommendations for North County? It doesn't have to come with waffles, but that's a big plus. I've tried Felix's in Oceanside and it was good, but not spectacular (unlike their hush puppies and fried catfish and fried green tomatoes, which are spectacular).

I'm sorry, but this dish as an excuse for a restaurant review is disgusting. Fried chicken and waffles??? It should be called the Drop Dead Special.

Never been to Roscoe's, huh?

What a difference a few miles make! In Hillcrest they can get away with charging $19.95 for a single fried chicken meal (jerky-dry, no less) without so much as a comment from the reviewer about the price. Down here in Imperial Beach and Chula Vista people would have a fit at paying that much and not getting a whole bucketful of chicken.