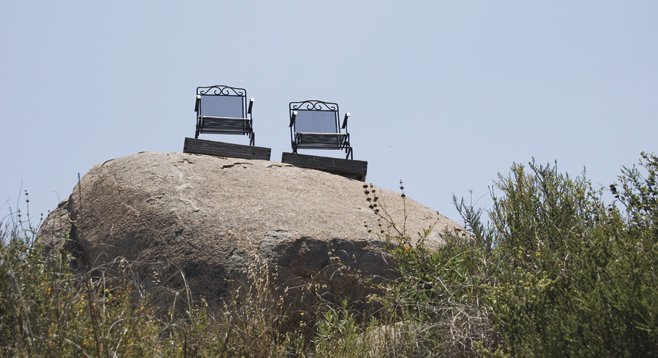 Clevenger Canyon is known for its peaks and steeply sloped canyons. Clevenger Canyon South offers impressive views not only of the canyon and the San Pasqual Agricultural Preserve but also of the ocean to the west and mountains to the east, especially on clear winter days. It also gives one a chance to sit in the catbird’s seat and watch the world drive by a thousand feet below. In the late winter and spring, the trail can have a spectacular display of wildflowers. It is one of the many trails within the San Dieguito River Park, which eventually will include a 55-mile Coast to Crest Trail from Del Mar to Volcan Mountain. Although the Clevenger Canyon chaparral was scorched in the 2007 Guejito Fire, it is making a beautiful comeback.

Clevenger Canyon is situated on a local fault. The reddish coarse sandy loam can be seen on the hillsides where the exposed batholith has weathered. Look for the rare Engelmann oak in the canyon among the mixed chaparral that includes chamise, ceanothus, scrub oak, and red shank.

The single trail leaving the parking area forks about half a mile from the trailhead. The West Trail branches off to the right and provides a relatively short hike to a 1550-foot knoll, via a series of switchbacks, where there is an unobstructed ocean view on clear days. The East Trail, going off to the left, provides a longer, more interesting hike, gaining 1000 feet of elevation before ending on a ridge that is over 1600 feet in elevation. The ridge overlooks the canyon to the west and Ramona to the south. Shortly after the trails diverge, the East Trail goes into a small side canyon, crossing a small wooden bridge over an intermittent stream lined with riparian vegetation and bordered by large coast live oaks providing some welcome shade. 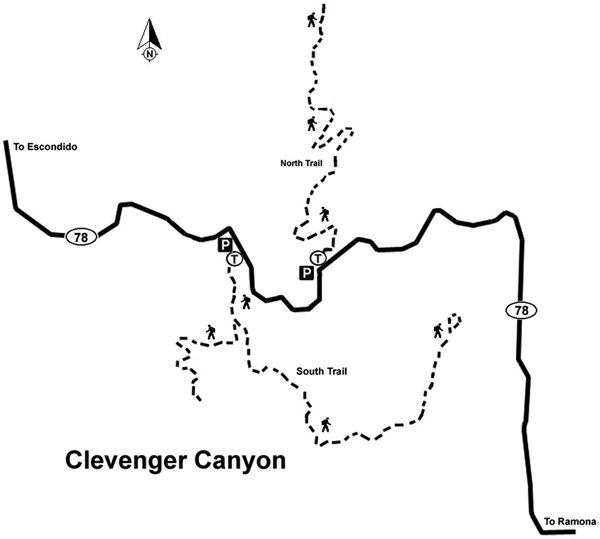 Neither trail is particularly steep, but both climb steadily for most of their length. There is very little shade. Although both are considered strenuous, they are well maintained and easily negotiated with no significant obstacles to overcome.

A variation of this hike can be made by hiking only three-fourths of a mile to the intermittent steam crossed by the small wooden bridge on the East Trail. The hike to the top of either or both West and East Trails and back is for anyone in reasonably good physical condition. The best time to go is February through May.

Distance from downtown San Diego: 35 miles. Allow 40 minutes. Take SR-163 north to I-8 east and then I-15 north to Escondido, exiting on east Via Rancho Parkway, which becomes Bear Valley Parkway. Turn right on San Pasqual Road and follow signs for the San Diego Zoo’s Safari Park, turning right (east) on San Pasqual Valley Road (SR-78) in 3.4 miles. Parking for the Clevenger Canyon South Trailhead is 5.3 miles beyond (east) the Safari Park, just off SR-78, and is well marked. No facilities or water. Carry at least a liter of water per person for the hike. No bicycles allowed.

Hiking length: Either 2.8 miles or 4.4 miles, out and back, depending on the trail taken. There are two branches of Clevenger Canyon South that branch from the single trail leaving the trailhead. The West Trail is the shorter trail at 2.8 miles. The East Trail is the longer trail at 4.4 miles. It is 7.2 miles to do both trails. Elevation gain/loss 1000 feet.

Difficulty: Strenuous because of the elevation gain.