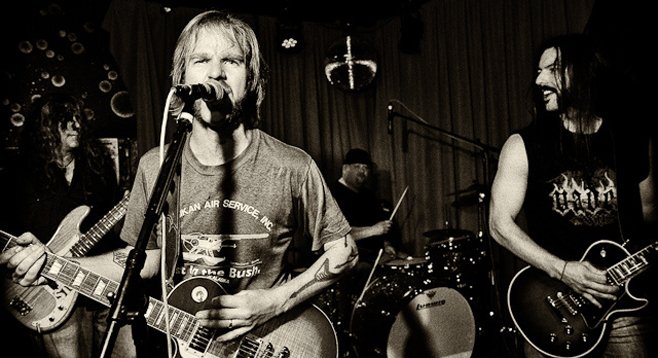 Lord Howler: the name fits the band. Consider a four-piece hard-rock outfit, two of which are guitars along with drums and bass and all of it performed at a volume setting for those kinds of people who hate their ears. Lord Howler’s specialty is known as horror metal, which depends more on themes than anything else. They still have that classically influenced pentatonic scale thing going on detuned guitars, just like any other metal band, but horror metalheads like Lord Howler sing about subject matter such as satanism, cannibalism, and the lycanthrope. I had to look it up. It means werewolf. Whatever. They nailed an SDMA award for Best Hard Rock in 2010, their first year as a band, skipped a year, then won the same category again this year for their second release, ...Hath Four Heads.

“The gritty-style hard-rock album is a great pick of albums for fast driving through the open road,” enthuses Bullet McKenzie in an entry about Lord Howler in her Rock ’N’ Roll Never Looked So Good blog. “Please don’t get a speeding ticket.” Or hit anybody. The word is that Charlie McRee, the main howler and a multi-instrumentalist, recorded the first, eponymous Lord Howler record by himself and then went looking for musicians to play it out in public. He found Jake Najor to take over drums, bassist Pete Pisaturo, and Mike Shultzman on second guitar.

Other top horror-metal bands include King Diamond, Ripper, Death SS, and Rob Zombie, who took the whole thing to a showbiz extreme. He, too, had that classic-metal Mesa Boogie Dual Rectifier sound going, even though he followed more of the Euro tradition in the studio, which lent a tight, compressed, disco-ish sound. Not so, Lord Howler. These guys are Sabbath-fueled all the way, and they are very good at it.