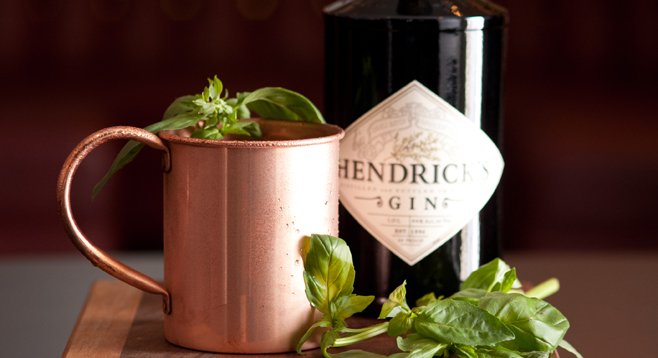 The bar manager at Thrusters Lounge Matthew Compton claims that the Basil Hendricks is a “perfect summer cocktail.”

Having concocted the cocktail in his kitchen, Compton says his creation brings together a few of his favorite ingredients – limoncello, lemon and especially basil.

“I wanted something to pair basil with in a cocktail,” he says. “So I started doing a little mad scientist cocktail hour in my kitchen.”

The cocktail also challenged him to give up some old grudges, Compton says, against the juniper berry.

While a perfect match for any summer day, the Basil Hendricks also has a special ingredient which lends itself well to cool autumn evenings – (cool, at least, by San Diego standards) – a light dusting of spice that serves as the cocktail’s finishing touch.

“You don’t want too much clove,” he says of the spice that invariably invokes the sere scent of burning leaves and visions of foliage sporting a more earth-toned wardrobe. “Too much will overpower the drink so that you’ll taste nothing but the clove. It’s literally a shake in your hand – one salt shake.”

In season and out, though, Compton insists, the Basil Hendricks will not disappoint.

“The lemon in the drink calms the clove down to the point where you can taste how fresh and effervescent the gin is on the inside,” he says.

Kitchen Proof: From the clove’s heat to the lemon’s bitter-tart to the cordial sweet to the subtle cool of the Hendricks ginned up cucumber, the Basil Hendricks appeals convincingly to all seasons and tastes.

How to make it

In a shaker tin, muddle:

Top tin with ice and add:

Stir vigorously with a spoon, strain over ice in a copper mug (or pint glass) and top off with 4 oz. of soda water, dust top with powdered clove and garnish with basil leaf and lemon wedge.