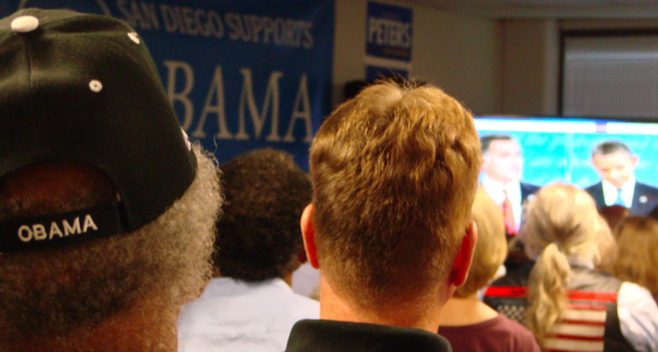 On October 3, the San Diego Democratic Unity Campaign Center hosted a viewing party for the first of three presidential debates at their Kearny Mesa headquarters.

Many of the same people showed up who were there for the September 6 Democratic National Convention viewing party. The number of attendees was unchanged from then — a standing-room-only crowd for the 90-minute broadcast. Again, the majority of guests were female but with a slightly increased number of men this time. Still, the group was almost entirely Caucasian.

Upon arrival, attendees were enticed by the sweet aroma of barbecue and offered a free buffet line with sandwiches, chips, dip, cookies, and soft drinks. Two pleasant young ladies from the center greeted guests and ushered them to open seats. Blank rosters with open date and time choices were provided so attendees could volunteer to canvass or work the phone bank through Election Day.

California State Assemblyman Marty Block, who is seeking reelection, was present with two of his campaign assistants. The other prominent Democrat present was San Diego Unified School District president John Evans, who is also seeking another term of office. Several local-news videographers recorded most of the event.

The event was opened by an excited Jeff Durfee, the San Diego Democratic Party chairman. Having attended the Democratic National Convention last month, he reported, “It was a non-stop rock concert”. Durfee announced the purpose of the evening’s gathering was “not only to turn out the vote for the president, but also for other key Democrat posts in San Diego County and change the culture of San Diego.”

Durfee emphasized the need to “elect Scott Peters and remove Brian Bilbray.” He urged guests to help defeat Proposition 32, which he said favors special interests, and to pass Proposition 3, which will fund police and firefighters.

Without effort on his part, President Obama’s introduction by the moderator was met with adoring screams, cheers, and applause. The group favored each of Obama’s responses, especially those delivered with a flavor of sarcasm. Attendees were attentive to all of Obama’s words, providing chuckles, hearty laughter, and applause. To one of Obama’s emphatic comments, an individual loudly responded with, “Right on!”

In contrast, the audience’s disinterest in Mitt Romney was repeatedly evidenced by their chatter during some of Romney’s comments. Attendees also registered their disbelief of Romney’s responses with catcalls of “Yeah, yeah,” “Oooh,” and “How?”

Following the debate’s conclusion, John Parker, the center director, made an additional plea for volunteers. He said today’s phone bank efforts had nearly reached a goal of 2000 calls. As the crowd dispersed, someone tried to initiate a chant of “O-bam-A,” although he was unsuccessful.