A Tijuana Spring in the Entrepreneurial Sector 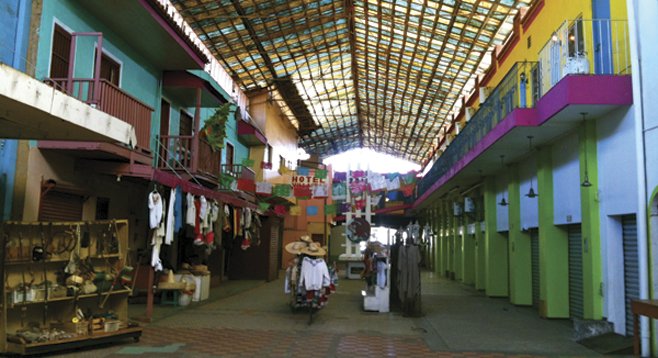 “They [alleys] are a potential for cultural tourism. A catalyst for a different image of downtown Tijuana historically linked to a shady legend.” — Josue Beltran, city historian

Pasajes are commercial alleys running across several blocks in the historic center of downtown Tijuana. They are unlike any other plan of a Mexican city, traced in a Spanish colonial checkerboard fashion with a central plaza. Most of the pasajes had their day offering to tourists trinkets such as pink mariachi sombreros, black velvet portraits of Elvis Presley, and other pseudo-Mexican paraphernalia perfect for a gringo Cinco de Mayo celebration.

The 56 blocks that are considered to be part of the historic downtown grid were established after a land dispute between the Arguello and Olvera families. After their reconciliation, a plan was drafted in the Beaux Arts style by Ricardo Orozco in 1889. It took almost 40 years for the city to grow into Orozco’s Cartesian dream and by the end of the 1930s, Tijuana began to develop from what seemed to be a Hollywood Wild West movie stage into a 20th-century city. The pasajes were auxiliary spaces sectioned into souvenir shops, extending to the bars and larger commercial venues located on the main strip of Avenida Revolución. Even though located off to the side of the thoroughfare, they became a huge economic success during the golden days of tourism (pre 9/11), with monthly rents up to several thousands of dollars for a 300-square-foot space. Most everyone that made money in Tijuana had some link to a business in this part of town, including landowners, shop retailers, and restaurant and nudie-bar moguls. It was rumored that dollar bills were swept up with a broom every morning!

The events of 9/11 altered the economy of Avenida Revolución and downtown Tijuana. The intense security along the border increased the wait time at the checkpoints, and a new policy requiring U.S. citizens to carry a passport to reenter the U.S. stifled the tourism that had made of La Revu (Avenida Revolución) the strip of cheap thrills that tourists longed for. By 2010, the avenue was covered with “for rent” signs; 80 percent of the businesses went bust.

“Cities have the capability of providing something for everybody, only because, and only when, they are created by everybody.” — Jane Jacobs, The Death and Life of Great American Cities

It wasn’t until a couple of years ago that a group of young artists longing for a space to produce and commercialize their art decided to move into the then-abandoned pasajes along Avenida Revolución. One such young fellow was Francisco, an architect in training, who was working at a San Diego architectural firm. He decided to be a gallery owner and open a microbrewery by night. Pasaje Rodriguez turned out to be the right place for his new venture. Studio 2287 is in a pasaje where you can sit down, enjoy the art, and have a cold Teodora beer, Francisco’s own brew.

Other artists and galleries have opened spaces in the alley, including photography studios, wine merchants, a used-book store, and vintage clothing stores — a one-stop shop for all your hipster needs! The success of Pasaje Rodriguez caught the attention of Jaime Brambila and Miguel Buenrostro, both in their late 20s and who have family ties to the original owners of the Pasaje Gomez, a two-level enclosed alley across the street from Pasaje Rodriguez. Buenrostro created an organization and website titled ReactivandoEspacios.com (Reactivating Spaces) in the interest of documenting the abandoned spaces and boosting their potential for resurgence; it’s the spark that could ignite a redevelopment strategy for downtown. 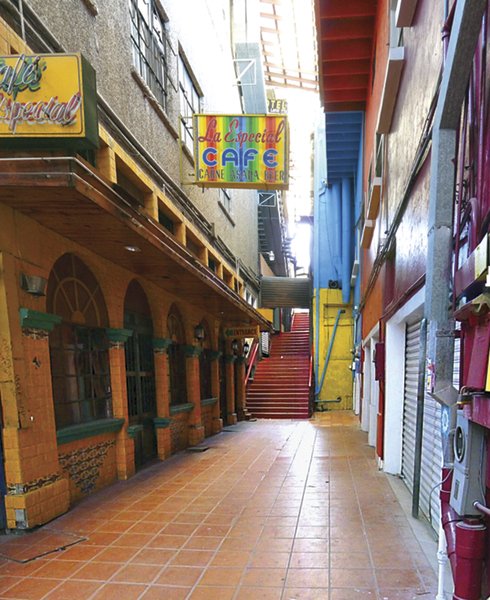 La Especial operated for more than 50 years before closing a couple years ago.

Brambila is operating his family-owned Hotel Lafayette partly located on Revolución and inside the pasaje where the famous La Especial restaurant operated for more than 50 years before closing its doors a couple of years ago. Brambila is thinking of reopening the restaurant since there are more restaurants reopening on the strip, like the renovated Caesar’s Restaurant. Their collaboration and enthusiasm for the regeneration of downtown and its historic alleys has in the past few years created a demand that took the original owners by surprise. Many of them now live in San Diego and had no hopes for a resurgence of economic activity in this area.

Today, out of the 35 shops at Pasaje Gomez, all but two are rented as artists’ spaces, bookstores, cafés, clothing stores, and even a music school. The spaces include galleries with ties to San Diego institutions, such as La Tentación, a photography studio and gallery run by Josue Castro and affiliated with the Museum of Photographic Arts and a soon-to-open gallery, lecture hall, and exhibit space affiliated with the Woodbury University School of Architecture’s San Diego campus. On the last Saturday of every month, Pasaje Gomez organizes an event called Tijuana Art Walk as a fundraiser for the ongoing renovation of the space. 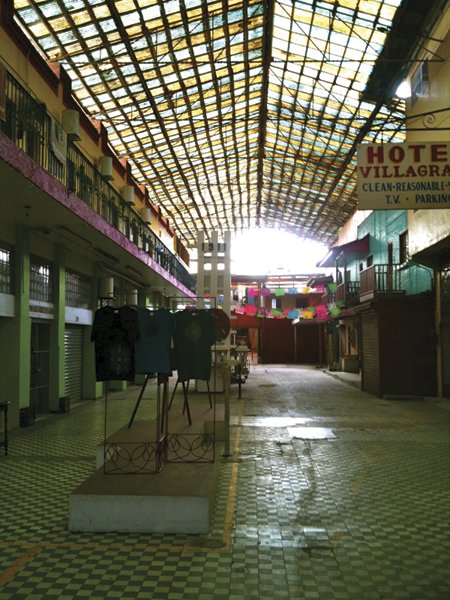 Artists hope to create a market beyond plaster reproductions of Bart Simpson.

The momentum is increasing and not only in the alleys; small shopping plazas are renting spaces to artists and cultural types. Plaza Revolución, next to Pasaje Gomez, was leased out a few months after it announced its reopening. One of the success stories of Plaza Revolución is Galeria 206, a contemporary art gallery run by sisters Monica and Melisa Arreola and Yave Lobsang. Wishing to attract art buyers from both sides of the border, the gallery displays up-and-coming local artists’ work at affordable prices, in the hope of creating an art market beyond Bob Marley paintings or Bart Simpson plaster reproductions once sold in the area.

“We are creating spaces for emerging artists to show their work, since our cultural institutions do not provide opportunities to them for being very young,” says Monica Arreola, an experienced artist and curator. Similar to Galeria 206, there are many studios and projects taking advantage of the cheap rents, enabling young and enthusiastic artists to take a stab at being entrepreneurs.

What is commendable is that the regeneration of the pasajes into cultural spaces has been a bottom-up process, initiated by citizens, including landowners, artists, and other pro-downtown advocates. They have been able to begin a process of regeneration through negotiation, a task that past and current city administrations have not been able to accomplish. The potential to redevelop downtown Tijuana partly lies in the conservation of historic districts — such as the old commercial alleys — and the promotion of new and innovative housing opportunities for a mixed social and economic sector of the population. Tourism will always play a role, and the profile of the tourist is changing from cheap-beer thrillseeker to a more hipster urbanite.