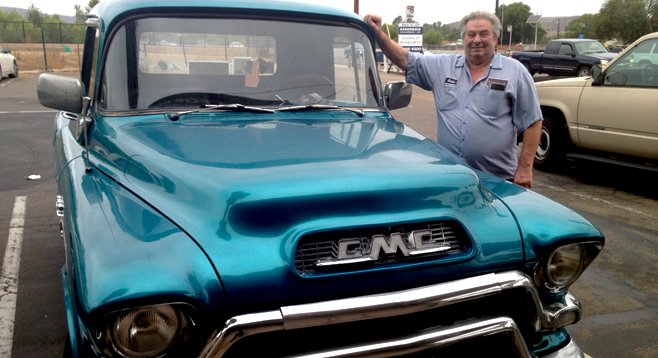 Is this your daily driver? Yes. I also have a ’50 Ford sedan. I’ve had a lot of older cars.

What was your favorite car? Oh, wow. Actually, I had a ‘41 Ford convertible; I think that was my favorite.

What’s your favorite thing about your truck? The best thing about this truck is that it’s not what it looks like. It has power steering and power disc brakes. It’s an automatic and it has air conditioning — it has all the modern conveniences. For an old truck, it’s very comfortable.

Is there anything wrong with your car? Not really. I use it every day; it’s a driver. It doesn’t belong on a trailer. I do need to get the bed-liner redone. It’s wood, and it usually looks really nice, but it’s getting warped.

Do you have any tickets or interesting accident stories? No, no tickets: I don’t need any of them. No accidents, either. I haven’t been in an accident in 30 years.

Do you mostly drive older cars? Yes, I do. I like old cars.

What got you interested in that? All my life, I’ve been interested in it. I’ve always had old cars. It started off that all I could afford was old cars!

Do you fix them yourself or do you have someone else fix them? No, I fix them myself.

Do you have any hitchhiking stories? No, I don’t hitchhike and I don’t pick up hitchhikers.

What do you listen to when you drive? I listen to the oldies station on the radio: 105.7.

Do you have a driving pet peeve? No, not really. The only thing that gets me is the people with their cell phones. That I don’t like. They’ve got a cell phone in one hand, a three-gallon soda in the other hand, and they’re trying to eat a hamburger and trying to drive. That, and women putting on makeup while they drive. Ten years ago, I had a car that they used to advertise with a woman driving and putting on makeup by saying, “The car ride’s so smooth, you can put on makeup in the car.” That was a Lincoln. And one time they showed some guy cutting a diamond. That didn’t really impress me: I’m not going to put on makeup in the car, anyway, and I wouldn’t have the slightest clue about what to do with a diamond.