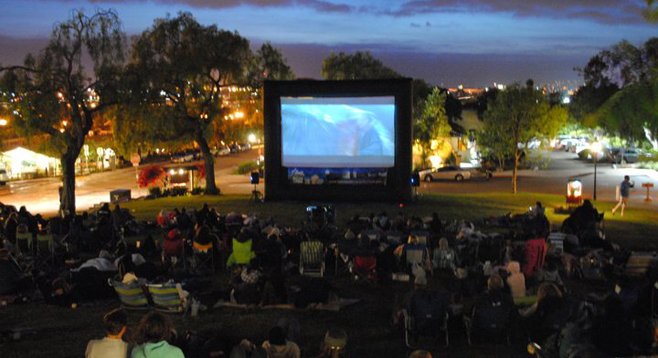 Times seem to be getting better for the City of San Diego, judging from a recent “request for quotation” for the cost of presenting free movies in local parks. According to the document, the expense — the amount of which remains to be determined — isn’t being picked up by city taxpayers, but instead by the California Gang Reduction, Intervention and Prevention Grant Program. According to the state’s website, “More than 15,000 gang-related homicides were committed in California between 1981 and 2008… Through this grant program, agencies provide job training and education programs targeting youth at risk of joining gangs or seeking to leave them.”

“The outdoor movie system will be utilized during the Summer Recreation Center programming,” according to the city’s request for quotation. “This system shall offer a ‘Movie in the Park’ atmosphere at the individual recreation centers where programming is in place.… The movie projection time typically lasts two and one half (2.5) hours, however, the City reserves the right to shorten or extend this time frame as may be required.”…Everybody knows that big labor and some of the state’s major corporations are giving heavily to the campaign for Proposition 30, Gov. Jerry Brown’s effort to convince voters that they should raise California taxes to plug the state’s gaping budget hole. But some smaller donors have also emerged to back the tax hike. According to recently filed disclosure statements, they include Casey Gerry Schenk Francavilla Blatt & Penfield, the law firm of Fred Schenk, brother of former Democratic congresswoman Lynn Schenk, an ex-Brown aide. Fred Schenk is on the Del Mar fair board thanks to an appointment by the governor. The firm kicked in $2000 for Prop 30. Another local donor is defense lawyer Eugene Iredale, who gave $1000. In addition to his tax-hike money, Iredale has given $5000 to the campaign for Proposition 34, the measure that would replace the state’s death penalty with sentences of life without parole.